After Morgan Bolt’s memorial service, my teenage kids did a surprising thing. Before I got into the house, one of them had placed the card they were given at church on our refrigerator.

There it was, wedged under a magnet among our family photos:  pictures of Morgan Bolt with family, his wife Christina, as a little boy with a rabbit — and this advice from Morgan himself:

“So go, live fully. Have more experiences than things. Before cancer I found volunteering to be immensely rewarding, and since cancer I’ve been truly blessed by volunteers. So go volunteer. Go take a risk. Go live, really live. Life is shorter than we think, and we have no guarantees. Live well and love everyone, without exception.” 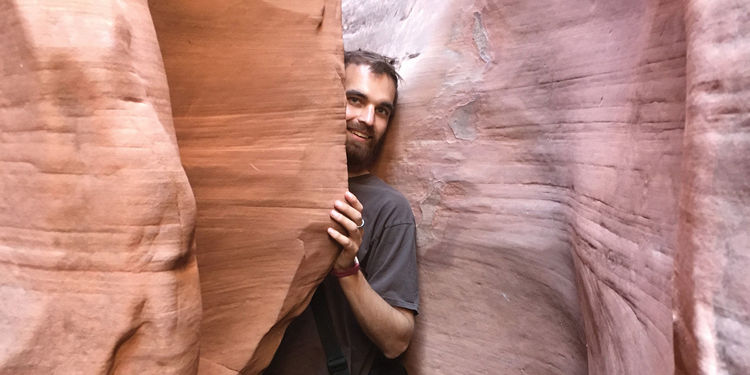 Morgan Bolt was 27 when he died on December 18, 2018. He had lived with desmoplastic small round cell tumors (DSRCT) for the previous four years, diagnosed with this rare cancer not long after graduating from college and about a year after marrying Christina — without ever expecting a cure.

My kids didn’t know Morgan Bolt, and I hardly knew him. I did remember him as a little boy, trooping into church with three siblings and his mother, Linda Mickler Bolt, and his father, Marvin Bolt ’92M.A., ’93M.A., ’98Ph.D. We knew the parents and I’d had some good talks with Marv. His rich mind and work at Chicago’s Adler Planetarium made for fun exchanges. It was a good family, and close.

But they had moved to Corning, New York, a few years back. Still, I had heard of the diagnosis and knew Morgan was getting treatment at Sloan Kettering Cancer Center in New York City, and that the prognosis was grim. Any parent’s heart breaks at such news, and thoughts of mortality and young life and experimental protocols, intense chemo and radiation treatments followed.

I also knew he was writing. He emailed once to ask for help getting a young adult fantasy series published. I didn’t know the genre or the book world well enough to be of much use, but I made a few inquiries on his behalf, and heard no more until February 14, 2018.

The email read: “For over a year now I’ve been trying to make progress on getting a nonfiction book on cancer and Christianity published, but I haven’t gotten anywhere. Publishing moves slowly, I know, but realistically I can’t afford to keep waiting forever, and I’m running out of prospective agents to query. I was wondering if you might have any advice or potential contacts I should try, or anything else that might help? I haven’t yet found a way to get around the reality that nobody seems willing these days to risk publishing authors who aren’t previously published already. Thank you for your time and any advice or pointers you might have! I really appreciate any assistance you might be able to offer, however small.”

It was one of those times you lean back in your chair and look out the window. Jolted, honored, moved. I wanted to help, although I didn’t know what I could do or expect.

I asked to see the manuscript, and what I found most striking was the compelling voice of the narrator — the honesty and humor, the brutal ordeal conveyed with such good-natured grace and faith, Morgan’s astounding grasp of life, of God’s presence. The narrative was good; it deserved readers.

While I set into motion what minimal connections I have in book publishing, I carved out of his book-length manuscript a magazine article that we published here in our summer edition.

Perhaps you remember it. If not, you should read it now: magazine.nd.edu/news/living-on-the-edge.

Meanwhile, I suggested some edits to the book manuscript, and pursued leads to get his book in print. Early in the fall, however, I’d heard from others that the doctors had done all they could. Time was running out. Morgan and I exchanged a few more emails. I regretted my failure to help him publish his book.

So imagine my elation when in mid-October I received an email from Marion Moore, a marketing associate at Smyth & Helwys Publishing in Macon, Georgia, asking if I would write an endorsement — a blurb — for Morgan Bolt’s soon-to-be-published Cancer Just Is. I could not have been happier.

But, while I marveled at Morgan’s perseverance in the final months of his life, I wondered if Morgan would live to see his story in print, to hold the book he had persisted in writing despite his medical tribulations.

We get plenty of packets from publishers sending us books, so I paid little attention to the return address as I ripped open the envelope last month — until I held in my hands Cancer Just Is: Convictions of a 20-Something Exploring His Illness, Faith & Culture. Tears welled in my eyes. And again, a week or so later, when I received from Morgan a signed copy of the book, thanking me. He died soon after.

I went into this profession because once upon a time I was deeply moved by a book I had read and thought how wonderful that a writer — someone I would never meet — had impacted my life so fully, using only the power of the written word to transfer feelings from one human being to another. Morgan Bolt did just that. And, as I told my kids after the memorial service here in South Bend on January 6, I think our purpose here on earth is to be an instrument for God’s work, however we determine that to be for ourselves. I also told them I can think of few people I’ve known who fulfilled that more obviously and in such a short time than Morgan Bolt.

His book gives the reasons why. The stories told and remembrances offered at his memorial service confirmed that he lived as he wrote.

Kerry Temple is editor of this magazine. In addition to Cancer Just Is, Morgan Bolt also published The Favored and The Tamyth Trilogy.