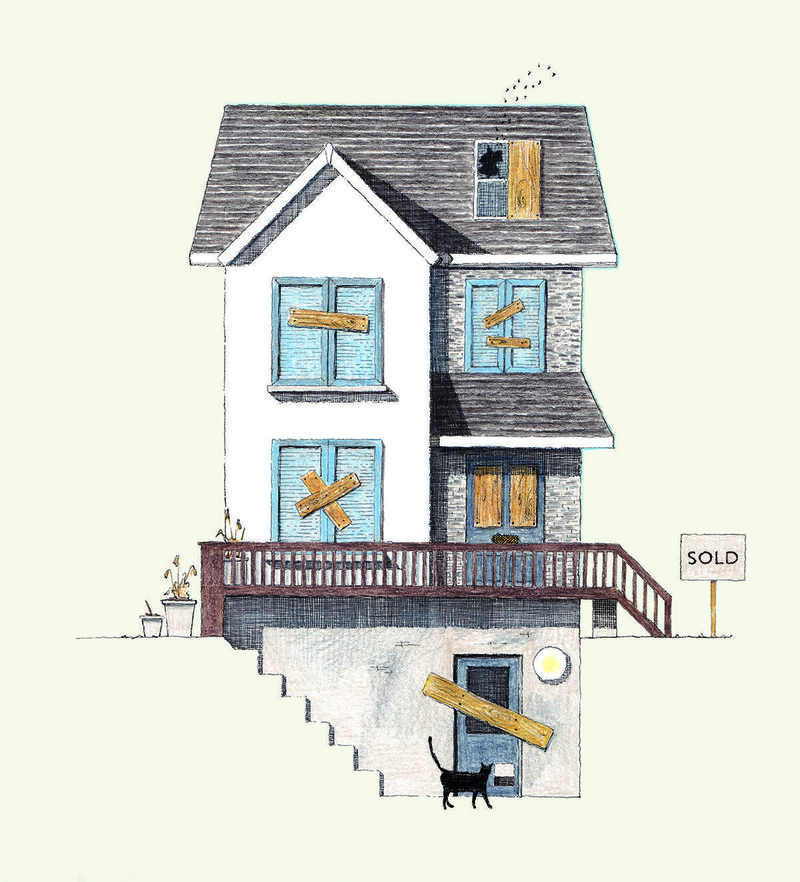 My wife and I closed on our house early last April. At the time, there were few cases of COVID-19 in Dallas, but the title company wasn’t taking any chances. We signed the sheaf of documents while sitting in our car outside the office. The title agent didn’t even want her clipboards back.

A cliché of homebuying is that it marks the beginning of a new life. In the weeks between buying the house and moving in, we had to contend with what was living there already — and what was dead.

I went to the house one day to prepare for a visit from the plumber. After a few minutes, I glanced down and saw dozens of black specks on my legs. I looked closer. They were moving. Jumping. Fleas.

My heart sank. How did we have fleas? The place was empty. No dog had lived there for at least six months. The house doesn’t even have carpet. I knew from hard experience that fleas are stubborn pests. I spread Borax all over the floor and called an exterminator.

A few days later, huge dead flies appeared on the windowsills. Then I noticed live ones hovering around. On the bathroom floor were maggots, apparently crawling up from beneath the house. I smelled decay.

The flies were born to die. Each one droned at low speed for a few minutes, a couple hours at most. That was it, the end stage of a life cycle. They showed no interest in food. Their big orange eyes were useless. Some were barely mobile. I watched one spin on its back in the middle of the floor, flapping a single wing. I felt a moment’s pity before I crushed it.

Whatever was happening in the house was much more disturbing than a rotted floor joist or a balky water heater. It seemed chthonic in origin, an elemental curse. I regretted every signature on the closing documents.

One property of life is response to stimuli. Poke a thing, or shine light on it, or spray it with chemicals: If it fights back or moves or shrivels up, then it’s alive. Our house had spent a winter and spring with no human occupants. It was porous, unable to usher out anything that took up residence. Something that carried fleas had moved into an unseen part of our dead house and died, and then fly larvae moved into its corpse. When the fleas lost their host, they explored the rest of the house.

The flies disappeared after a week, but the fleas remained. We called the exterminator again and again. During one visit, he came down from the attic, agitated, swatting his arms with a cloth. “Man, there’s a lot of fleas up there!” he said. He seemed to have forgotten why we had hired him.

We moved in, and the fleas feasted. The itch from dozens of bites on our ankles flared in waves: noon, 7 p.m., 2 a.m. I scratched them until I bled. It felt like we had regressed to a premodern existence. It was a great triumph when societies stopped being subject to flea-borne diseases. Now that a novel plague was spreading across the country, the means to resist it — staying home — exposed us to a medieval affliction.

Then the flies returned. Whatever they were feeding on this time was in the attic; flies appeared in our shower, dropping from an overhead light fixture. When we turned on the light, they cascaded clumsily down, warmed by the bulb. We taped a garbage bag over it to catch them.

Would our house ever feel like it belonged to us? I began calling the bathroom the hellmouth. I refused to shower. My wife told me it was fine; you just had to forget the bag of dead flies suspended over your head.

I couldn’t take it. We retreated to a neighborhood Airbnb for a few days. Maybe we were the invaders, I thought, the negative stimulus, and the bugs had evolved to push us out of their domain.

While we were away, the bites healed. We called a new exterminator. He was obviously unnerved by our nightmare situation. “You don’t see that every day,” he said, staring up at the pendulous, buzzing bag on the ceiling. He squeezed through a trap door to spray under the floor; he crawled around the attic to spray up there.

The treatment seemed to work. The flies subsided. My wife found an essential oil spray that sent the fleas into retreat. We put wire mesh over every mammal-sized point of entry. Part of me wanted to wrap the house in plastic. I wondered if a squirrel could sneak in through our mail slot.

The worry and work made me think that this must be what an immune system feels like. Vigilant, reactive, easily overstressed. Ultimately paranoid. We have been masking and distancing and sanitizing so we won’t have to rely on our biological responses to stimuli. We know our systems are fragile. We try not to put them to the test.

We battle the virus because we’re alive; it’s what life does. The virus is a threat, but it is not, by itself, death. An elderly Benedictine monk once told me we need to realize that death isn’t “out there” in the world. “It’s in here,” he said, tapping the middle of his chest. As I learned from the creatures under the house, life and death are tethered, each one pursuing the other.

My killer may already be inside me, in lymphatic cells or microbiota poised to go haywire. Clostridium difficile bacteria kill an estimated 15,000 Americans a year. When they are present in someone’s gut flora, other bacteria normally keep them in check. But antibiotics can upset that equilibrium, giving C. diff. free rein. It’s like treating your home for one pest, only for its prey to flourish.

“Keep death daily before your eyes,” St. Benedict wrote in his sixth-century handbook for monks. It’s good advice outside the monastery, too. It should be easy to follow in a pandemic, but the disparities between who lives and who dies from COVID-19 make it harder for someone like me, who can work from home and has health coverage, to retain the spiritual lesson. Those buffers can foster a false confidence, even an indifference to others, which is emotional death.

The monk I spoke to said he reads a different Emily Dickinson poem each day and emails his thoughts on it to friends. That, too, is a response to stimulus. It’s life.

Dickinson wrote, “I heard a Fly buzz — when I died.” On the morning I write this, still alive, I follow a buzz to the windowsill and find three new bug-eyed carcasses.

Jonathan Malesic’s essays have appeared in America, Commonweal, The New Republic and The New York Times Magazine. His new book, The End of Burnout, will be published this fall by the University of California Press.