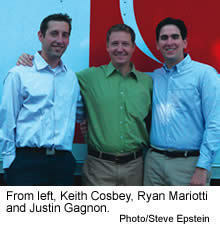 Ryan Mariotti ’00 and Justin Gagnon ’00 watch through sunglasses as dozens of fourth- and fifth-graders line up on a sunny playground at La Entrada Middle School in the Silicon Valley suburb of Menlo Park.

The kids are picking up lunches their parents have ordered for them online through Children’s Choice, a health-conscious and environmentally friendly lunch provider started by friends Mariotti, Gagnon and Keith Cosbey ’00. They were in the Glee Club together and members of the first edition of the club’s pop-music a capella spinoff, the Undertones.

They started Children’s Choice about 5½ years ago, and after a humbling start (living with Gagnon’s parents in the San Francisco suburb of Danville the first two years), the business has taken off. Children’s Choice now serves about 6,500 lunches a day at more than 70 public and parochial schools in the Bay Area, they say. The company specializes in districts too small to have their own school cafeterias or a central food-preparation facility. It employs about 50 people and plans to expand into Southern California this year.

For all their success, however, Gagnon and Mariotti don’t appear entirely satisfied as they watch the goings-on at the middle school. It’s hard to fathom why.

Parent and student volunteers clutching printouts of orders are matching up pupils with entrées. Children eating at round picnic tables in the warm California weather dutifully deposit their garbage and the company’s special compostable packaging materials into compost bins. After processing, the waste will return to the school, transformed by green magic into rich black soil.

What’s less than ideal, from Gagnon and Mariotti’s point of view, are the objects stacked on the tables behind the meal-disbursing volunteers: box after box of pepperoni pizza from Round Table, a well-known regional pizza chain.

It’s not that Round Table is horning in on their business; Children’s Choice contracted for the delivery. And it’s not that the partners think pizza is terrible. Done right, the company’s dietician assures them, pizza provides a balance of nutrients.

It’s that one of the company’s goals is to diversify kids’ eating habits beyond modern-day school lunch staples like bagel dogs and chicken nuggets or an overdose of pizza. That kind of diet is blamed by some for contributing to the country’s child obesity epidemic.

The company offers 12 different entrées daily. Everything (except the delivery pizza) is made from scratch in its own commercial kitchens. The food descriptions are filled with such terms as organic, multigrain, hormone-free, sustainably ranched and locally sourced.

A parent can order any number of meals up to a month in advance. The “children’s choice” part comes at school. Kids get to select their cold drink (milk, sometimes juice), a fresh fruit or vegetable (served in compostable plastic bags made from a corn derivative) and a snack, including sunflower seeds, Goldfish crackers, a reduced-fat chocolate chip cookie. Meals range in price from $3.75 to $4.45.

The entrée choices January 12 at the middle school included shepherd’s pie and pasta primavera, a chicken Caesar salad and a Mediterranean lentil salad. Pizza whipped them all.

But to Gagnon, the company’s menu czar as well as CEO, here’s the hopeful sign: During that same week, Children’s Choice debuted winter goulash and a vegan Indian harvest curry. Almost 600 students tried the goulash and 300 tried the vegetable curry, he says, “without ever seeing it on our menu before and, potentially, never having tried it at all.”

It’s safe to say that none of these guys ever dreamed they would be celebrating goulash sales at this point in their lives. After graduation, Gagnon, a management-information systems major, went to work as a computer engineer for Level 3 Communications in Colorado. Mariotti, a chemical engineering major, and Cosbey, a music performance major, both took jobs in Chicago with Accenture, the global consulting company.

Children’s Choice started with Gagnon’s father, Larry, a caterer, launching a side business in the early 1990s providing school lunches. He knew his son and his Glee Club buddies could build websites, so he offered to fly the three of them to San Francisco over a weekend to construct a site to allow parents to place orders online.

Justin Gagnon had to tell his father that it would take a lot more than a weekend to do that. But it planted the seed of an idea for a business venture, something the friends had been hoping to pursue together since college. In a few months they’d quit their jobs and moved in with the Gagnons, who built an office addition onto their home. The parents became one-quarter partners in the venture along with the three friends. Each put up about $6,000, they say.

There were missteps, of course. Mariotti recalls when he was developing the credit-card processing for the website (www.ChoiceLunch.com) and a forgotten line of test code resulted in 25 families being charged $1,000 instead of the usual meal price. And the partners never allow Justin to live down such entrée flops as Mediterranean steak with couscous.

The CEO says about 30 percent of families order through Children’s Choice at the schools it serves. At La Entrada, which is a public school serving a mostly affluent community, the regulars include Virginia Chang Kiraly. She says she spends $250 to $300 a month on lunches for the two children she has at the middle school.

“My kids only like hot food, so I’m willing to pay a little more rather than have them throw away a whole cold lunch or for me to have to bring a hot lunch for them,” she says.

Gagnon says the company is ahead of its growth projections. He’s been designated to lead the expansion into Southern California this year. His wife, Allison (nee Gooding) ’02, is from Long Beach, south of Los Angeles.

Beyond Southern California, who knows?

“I think we all went into this with national aspirations,” he says. “We definitely want to change things.”

A former associate editor of Notre Dame Magazine, Ed Cohen sat in the University of Southern California’s student section but couldn’t bring himself to cheer for the Trojans as he earned a master’s degree in online communities from USC’s Annenberg School for Communication in 2008.