Notre Dame’s parting gift to the Class of 2017 on the University’s 172nd Commencement Weekend was a master class in civil discourse and civil disobedience, and the options available to well-educated men and women in a multicultural democracy.

The course instructors included the vice president of the United States; a weeping, blue-tongued Jesuit recognized for his gang ministry; an Arabic and peace studies student who grew up in China; and the graduates themselves, both those who stayed put and those who walked out on it all. 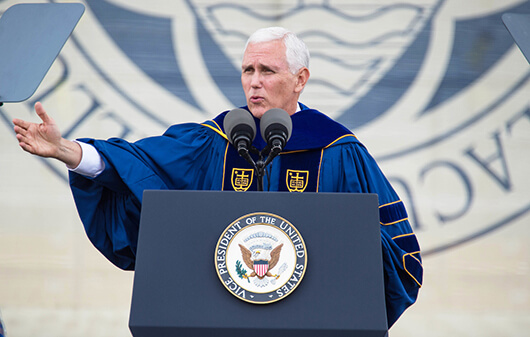 Wet spring weather dampened festivities throughout the May 19-21 celebration of academic achievement and threatened to force Sunday morning’s grand climax indoors. Instead of ditching their preparations in Notre Dame Stadium for the more exclusive confines of the Joyce Center, commencement organizers chose to delay the day’s start by one hour and keep the afternoon’s degree ceremonies on schedule, streamlining some of the main event’s pomp and circumstance in favor of what became a series of powerful statements about the nature and exercise of free speech and the essential value of listening to all voices, great and small.

An estimated 24,000 guests, many wearing plastic ponchos and glancing warily up at the skies, had assembled inside the stadium by 9:45 a.m. Soon, one of the chief marshals, political science professor Michael Desch, appeared on the video boards flanking the stage to announce the academic procession as it approached the stadium tunnel from Library Quad. Amid the familiar sights of colored banners and professors marching in robes and hoods over the next 40 minutes, unique moments captured many visitors’ attention. One student found her seat with the help of a service dog dressed in cap and gown. Three architecture graduates walked in with their mortarboards conjoined by a scale model of the Campus Crossroads Project. Last to enter the arena — to applause and cheers as the concert band played the vice-presidential anthem, “Hail, Columbia” — were Notre Dame’s president, Father John Jenkins, CSC, ’76, ’78M.A. and his much-anticipated guest, former Indiana governor Mike Pence. 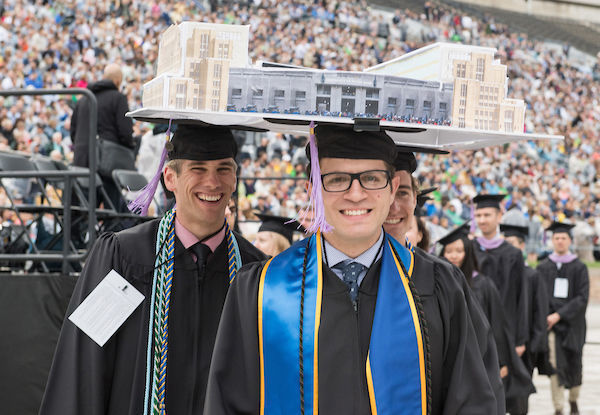 At the University’s Main Gate, a crowd of 125 off-campus protestors had gathered to voice disapproval of the vice president’s visit to campus. Early in the semester, Jenkins had invited Pence to deliver the commencement speech and receive an honorary doctor of laws degree. The move drew praise from some on campus and sharp criticism from others, particularly students and faculty who objected to Pence’s positions as governor on issues from religious freedom and LGBT rights to the relocation of Syrian refugees into the state. Chanting, “No Pence! No KKK! No fascist USA!” and waving signs challenging the legitimacy of the Trump White House, the demonstrators waved at cars that honked affirmations as they passed by along Angela Boulevard.

Inside the stadium, salutatorian José Alberto Suárez Martínez, a computer science and engineering major from Monterrey, Mexico, led the invocation, and valedictorian C.J. Pine greeted everyone in Arabic, his major, and Chinese, the language he learned from infancy after his parents moved the family to China, “inspired by their faith to work in education.” Pine borrowed the concept of “deep magic” from Christian author C.S. Lewis’ Chronicles of Narnia to describe the “transformative power . . . to care for the dignity of our friends” that he encountered at Notre Dame, especially in the lives of a classmate from South Sudan who had returned home to start a school and the singing, joyful housekeeper of Siegfried Hall.

Turning beyond campus to world affairs, exploring themes of humility and the meaning of sacrifice, Pine drew from his childhood experiences living in a Muslim village to criticize the “scapegoating of Muslims” for violent conflict in the world and the treatment of Middle Eastern refugees at home. “If we are going to build walls between American students and international students, then I am skewered on the fence,” he said, leaving the public-policy implications of his remarks to be inferred. “It is precisely in response to the suffering of Syrian refugees, fleeing war, that the arms of Jesus, outstretched on God Quad, call for a courageous response.”

Pence was one of seven dignitaries whose honorary doctorates, Provost Thomas G. Burish ’72 reminded the crowd, are more difficult to obtain than academic degrees, since they are “not awarded for demonstrating the potential to improve the world but rather for actually improving it.” The vice president was joined by former NASA administrator Charles Bolden; Cardinal Kevin Farrell of the Vatican’s new Dicastery of Laity, Family and Life; Imperial College London president Alice Gast; the Rev. Martin Junge, general secretary of the Lutheran World Federation; trustee emeritus Philip J. Purcell ’65; and the architect and Walt Disney Co. developer Martha Lampkin Welborne ’75.

Moments later, introducing Pence as speaker, Jenkins invoked the University’s tradition of inviting political leaders to campus while noting the “deep divisions and raw political feelings” of the times and “challenges that demand from us near-Solomonic wisdom.”

“We must find a way to protect the life of the unborn child and respect the rights of women, particularly those who are most vulnerable and alone,” he said, leading off a litany of political flashpoints over issues in which “the love that fires our passion is twisted into a hatred for those who disagree.”

“At Notre Dame,” he said, “we must strive for something higher.”

Jenkins praised Pence as a servant of the common good, the grandson of a hardworking Irish immigrant, a former Indiana congressman praised by Esquire magazine in 2008 as “one of the most principled members from either party,” a “voice of balance, reason and continuity” in the current administration. And, as “a friend.” 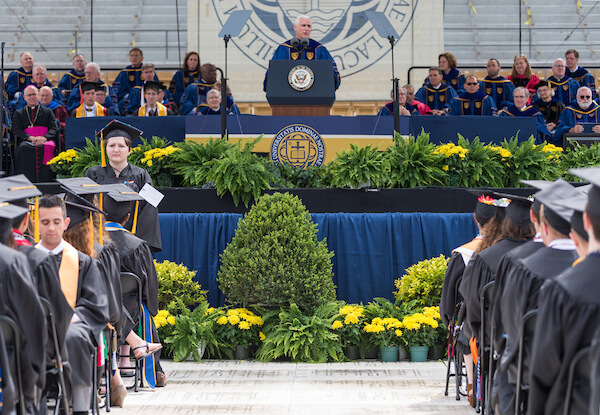 As Pence approached the podium, the sun came out for the first time in days. Meanwhile, dozens of students who had announced their opposition to the choice of speaker stood up without a word and walked toward the nearest steps, exiting under a short chorus of boos to join in a student-faculty protest rally outside the stadium.

No stranger to controversy, the former talk radio host and Republican budget hawk delivered his prepared remarks without commenting on the walkout but, in remarks on free speech and universities as places of principled disagreement, appeared to affirm the students’ freedom to stay or leave. “Notre Dame is a campus where deliberation is welcomed,” he said, “and where every speaker, no matter how unpopular and unfashionable, is afforded the right to air their views in the open for all to hear.”

But Pence drew the line at trends that he said silence disagreement: “speech codes, safe zones, tone policing, administration-sanctioned political correctness, all of which amounts to nothing less than the suppression of the freedom of speech,” he said.

That left it to Father Gregory Boyle, “Father G,” the white-bearded Laetare medalist in sunglasses who seemed to enjoy dropping a few colorful phrases into his acceptance remarks, to shift the focus from the din of the public square to those whose voices never enter it.

The Jesuit priest founded Homeboy Industries in East Lost Angeles in 1988 and, in the words of the Laetare citation, turned “that quixotic bakery-café-silkscreen-embroidery-landscaping ‘homie-staffed’ enterprise” into “the largest gang intervention, rehabilitation and re-entry program in the world” serving “ten thousand souls each year.”

“You know,” he told the graduates, “what Martin Luther King says about church could well be said about your time here at Notre Dame: ‘It’s not the place you’ve come to, it’s the place you go from,’ and you go from here to create a community of kinship such that God, in fact, might recognize it.”

The only way to do that, he said, is to go to society’s margins and stand with the poor, the powerless and the voiceless, “those whose dignity has been denied, and . . . those whose burdens are more than they can bear.”

Minutes later, as the ceremony drew to a close, the Sacred Music Choir stood to sing in German a hymn of healing — written by Martin Luther and based on a Catholic prayer calling on the Holy Spirit — to mark one of the deepest divisions of the modern world on the 500th anniversary of the Protestant Reformation.

Father Jenkins called the hymn “a reminder that our task, under the guidance of the Holy Spirit, is to take the broken pieces of our world, shattered by misunderstanding and division, and put them together to make something beautiful and harmonious for God.”