Walk out the front door of Notre Dame’s “Global Gateway” in Rome and you can turn one way for the ancient Colosseum or the other for fourth century churches and catacombs — all within a few blocks. 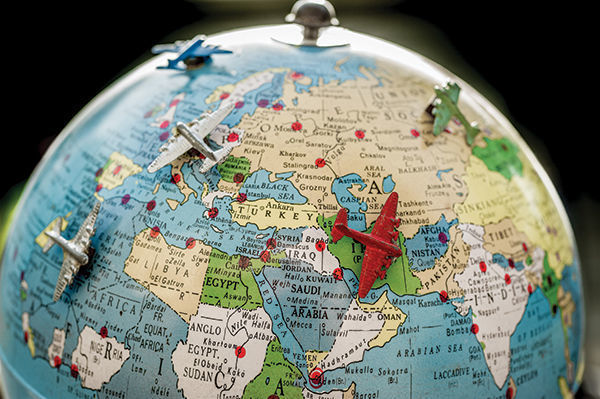 The neighborhood exhibits such a rich blend of Roman and Church history that Notre Dame created a series of nine walking tours, which all start at the Gateway building on Via Ostilia. To research and write the tours, Italian Studies at Notre Dame tapped a former instructor, Chiara Sbordoni, an expert in Roman literature and culture who actually grew up in that neighborhood. That’s only one example of the international educational connections the Gateway concept hopes to nourish.

The Global Gateway designation indicates that the University is setting its international sights higher than a simple expansion of its traditional study abroad programs in strategically selected major cities. The concept, which comprises Notre Dame facilities in Dublin, London, Rome, Jerusalem, Beijing and Chicago, is designed to extend the University’s international reach and create places for worldwide cultural and intellectual exchange. Increased investment in these facilities and the academic exchange opportunities they provide makes them important global nodes where Notre Dame scholars at all levels may connect and collaborate with their international peers.

Under the direction of Notre Dame International, an initiative of the provost’s office dedicated to increasing the University’s overseas influence and visibility, the Global Gateways bill themselves as “academic and intellectual centers, where scholars, students and leaders from universities, government, business and the broader community gather to discuss, discover and debate issues of topical and enduring relevance.”

“The concept of a Global Gateway is a portal so we can look out on the world and it can look at Notre Dame,” says J. Nicholas Entrikin, the University’s vice president and associate provost who heads Notre Dame International. “It’s an opportunity to have a global footprint and let the world know more about our great research and teaching.”

As an example, von Eschenbach points to Professor Scott Appleby ’78, until recently the director of the Kroc Institute for International Peace Studies, who wants to make London the hub for Contending Modernities. That multiyear, interdisciplinary research and education initiative explores how religious and secular forces interact in the modern world. It’s much easier to convene scholars in London than South Bend, von Eschenbach explains. 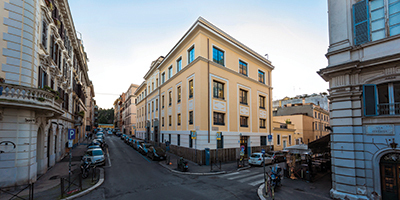 The Rome facility, which on April 9 became the first to be blessed as a Global Gateway, offers similar opportunities. The Italian Studies program already has hosted a seminar there on Dante’s intellectual formation with scholars from all over Italy. In June, the Gateway hosted an interdisciplinary seminar on the historical interaction between the Church as a European institution and American culture, and the Kellogg Institute for International Studies will sponsor a conference on human dignity in the fall. Looking further ahead, the Rome Gateway can coordinate Holy Week pilgrimages for Notre Dame students studying abroad.

Father Bill Lies, CSC, ’93M.Div., vice president for mission engagement and Church affairs, says the expanded facility, staff and resources in Rome will enable the University to broaden its service to the Holy See.

“The Vatican deals with intractable problems all over the world,” Lies says. “They are often in need of great scholars to help with that. Now we can invite people to our place to really collaborate and think together.”

Notre Dame also serves the Church at its Global Gateway in Jerusalem, the Tantur Ecumenical Institute. In 1967, the Vatican bought land to further the ecumenical spirit of Vatican II near the place where three years earlier a Roman Catholic pope had met with a patriarch of Constantinople, the nominal head of the Eastern Orthodox communion, for the first time since the ninth century. Pope Paul VI entrusted the project to Rev. Theodore Hesburgh, CSC.

Notre Dame leased the land from the Holy See and opened Tantur in 1972, hosting over the years more than 5,000 Orthodox, Protestant, Anglican and Roman Catholic participants in its programs. Besides Christian unity, the Tantur institute seeks to develop understanding and relationships with other faiths, especially Jews and Muslims. Gateway opportunities range from ecumenical conferences and research to study programs for scholars that can last from three weeks to three months.

One of the more established Gateway sites is the Keough-Naughton Notre Dame Centre in Dublin. Its home base is O’Connell House, an 18th century Georgian building that was once home to Daniel O’Connell, known as “The Liberator” for his leadership in the battle for Catholic rights in Ireland’s long struggle with England.

Kevin Whelan, the program director in Ireland, says the recent growth of internships has helped transform O’Connell House into a true Gateway. Whelan says local interest in Notre Dame peaked after the 2012 football game in Dublin, boosting the number of student work opportunities from a handful to nearly 50 today.

“It’s a very broad engagement across every sector of Irish culture, business and politics,” Whelan says. “It’s a way for us to project Notre Dame in Ireland, and the students are brilliant ambassadors. Once we get a foot in the door, people ask for more of our students.”

Samantha Caesar ’14 completed an internship with the Irish Department of Foreign Affairs and Trade last summer. The Long Island native assisted with a research project and also helped distribute money from a reconciliation fund to projects in Northern Ireland that bring Catholics and Protestants together, including a YMCA in Belfast where she conducted a site visit.

“It perfectly fused my interests because I’m a political science major with minors in Irish and peace studies,” Caesar says. “Working there was a little more structured than studying. They treated me like a professional from the moment I arrived. I loved discussing international politics with my co-workers, who were so informed on the issues.”

On the other end of the Global Gateway spectrum, Notre Dame’s new program in Beijing is small but has enormous potential for growth. Acting as the hub for study abroad options springing up across Asia, the Beijing Gateway has established exchange programs with four of the top universities in Asia, including three in India. It also helps to bring hundreds of Chinese students to Notre Dame for summer research projects, as well as to identify learning opportunities for Notre Dame students in China — from business and engineering internships and projects to service programs and Chinese language classes.

“Beijing, as the capital of the world’s second largest economy, is not just a very important place for international business but for higher education as well,” says Professor Jonathan Noble, assistant provost for ND International and director of the Institute for Asia and Asian Studies.

Closer to home, the Notre Dame facility in Chicago’s historic Motorola Building is also a Global Gateway because such University institutes as Kroc and Kellogg often use it to connect with international partners who can’t make it all the way to South Bend, associate provost Entrikin says. In May, the Kellogg Institute hosted a former president of Chile there in conjunction with a Latin American Studies Association conference.

There have been debates in higher education about how universities should approach international expansion. Some schools build large, independent branch campuses — about 100 of these currently exist overseas, according to one study — while others create smaller, collaborative hubs or global centers.

On one end of that scale, New York University has invested heavily in establishing brick-and-mortar campuses in Abu Dhabi and Shanghai. At the other, Columbia University has created eight global centers with temporary spaces and locally hired staffs that facilitate student and faculty projects and academic exchange. Safwan Masri, Columbia’s executive vice president for global centers, told Inside Higher Ed that concerns about economic feasibility, institutional autonomy, the environment for academic freedom in certain countries and faculty interest in teaching abroad led Columbia to establish these centers while limiting long-term investment in each.

Notre Dame’s direction appears to be a combination of both — Global Gateways that are owned by the University and locally staffed, large enough to coordinate student programs as well as significant international conferences and events, but not so large as to become new satellite campuses.

Ingrid Rowland, a Rome-based Notre Dame professor of classical architecture and history, says the Rome Gateway now has the space to bring in more students as well as some Italian colleagues. It also provides opportunities for interdisciplinary work and media coverage.

“We can really upgrade the magnitude of everything,” says Rowland, who gave some members of Notre Dame’s Board of Trustees a special tour of ancient Roman churches in January. “I’ve always been interdisciplinary, but now I can really be me. The options are amazing — it reflects the interdisciplinary nature of Rome.”

Brendan O’Shaughnessy is a communications writer at Notre Dame.