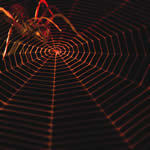 As anyone who has ever seen a Spiderman movie knows, spider silk is strong, helpful stuff. The problem is that spiders don’t make enough to be useful. Consequently, it would be difficult to gather a sufficient quantity to produce spider-silk fabric.

Or maybe not. Perhaps we don’t need spider webs to acquire enough of the slippery, tough material. If Professor Malcolm Fraser’s research goes as planned, one day you, too, may have clothing made of the incredibly strong silk — or it may be the airbag in your car or a synthetic ligament in your knee. With its greater tensile strength and elasticity, Fraser says the material is also ideal for the ultrafine sutures needed for ocular, neurological and cosmetic surgeries.

Along with colleagues from the University of Wyoming, the Notre Dame biologist is attempting to genetically engineer silkworms to produce the superior spider silk. Employing a technology called piggyBac, which Fraser developed earlier, the research team is attempting to take the silk-producing gene from the European garden spider and insert it into a mutant silkworm that lacks the ability to produce silk fibers.

PiggyBac, a so-called “transposon,” is a rogue snippet of DNA that can move from one place on a chromosome to another while at the same time carrying along whatever is attached to it. Using piggyBac, the spider silk-making protein can be targeted directly to the silkworm’s silk-making gland. In theory, Fraser says, it should be possible to make “designer silk fibers” in varying strength and elasticity.