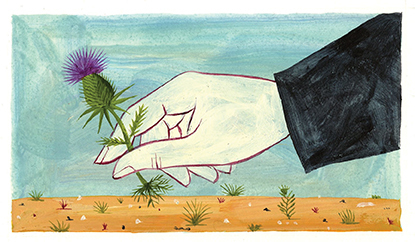 The work master wasn’t around that Monday morning, so there was no one to assign jobs to the half-dozen guests of the monastery who showed up at 9 a.m. for the day’s work session. We could take the morning off, if we wanted.

Surrounded by ochre mesas dotted with piñon trees, a perfectly blue sky above, the monastery is set in a canyon at the end of a 13-mile dirt road that runs beside a shimmering river in northern New Mexico. There’s no cell reception, no easy internet access. Not even a newspaper. It’s a perfect place to be still — to have leisure, that freedom from work and responsibility — and to try to know God.

But I had come to work. I’m a writer and sometime academic, and I was doing research for a book about work’s place in our lives. I wanted to understand Benedictine monks’ approach to ora et labora, prayer and work. So I was disappointed that morning. Without a job to do, would my whole trip — the flight, the bumpy drive, the days spent sealed off from the world I know — turn out to be pointless?

Other guests wanted to work, too, so we gave ourselves assignments. A tall, thin guy with graying hair said he would do some weeding on a gravel path that meandered among the outdoor Stations of the Cross. I said I would join him. I wouldn’t get to work alongside monks, but at least I would feel useful for a while.

The tall guy went with a brother to a small tool shed. He came back with a few dull, rusty implements. Weeding must not be a priority in the canyon.

We got to work, and as the sun broke the morning chill I removed my jacket, then my sweater. Then I rolled up my shirtsleeves. I gained new appreciation for the “thorns and thistles” God created to curse Adam’s work. Tiny burrs got under my gloves as I yanked up shallow-rooted desert flora crowding the path. Chanted psalms from the morning’s Liturgy of the Hours echoed in my mind.

Weeding is among the most futile human activities. Pulling up the big weeds just reveals smaller ones. And they grow fast — like weeds. Before long, you’ll be crouching down to do it all over again.

Jesus knew this. He tells a story about servants who discover that weeds have grown up in their lord’s wheat field. They ask him, “Do you want us to go and gather them?” The servants are thinking as human beings do. They’re anxious. They want things taken care of right away. They can’t bear unfinished work hanging over them. The lord has no such worries. “Let both of them grow together until the harvest,” he replies.

With winter approaching, our weeding probably didn’t matter much. It was make-work. The productivity was not the point. In his monastic rule, St. Benedict prescribes work even on Sunday for “anyone [who] is so remiss and indolent that he is unwilling or unable to study or to read.” By giving myself unnecessary work to do, what was I admitting about myself?

After an hour, we decided we were done weeding. With nothing better to do, I went to the guesthouse, where I was staying. Two other guests, both middle-aged women, were tidying the kitchen. Meanwhile, a few young brothers in hooded sweatshirts and skinny jeans were cleaning rooms to prepare for the next visitors.

I hid out in my room. I heard doors opening and closing in the guesthouse, wastebaskets clanking, and the hollow sound of a five-gallon bucket being set down roughly on the floor. I heard the brothers chatting. My conscience gnawed at me. I didn’t want to work. I didn’t have to work. I hadn’t been assigned any work. But I felt like I was supposed to work. It would have felt wrong to bask in the desert sun while others labored around me.

Like most Americans, I’m conditioned to equate work with virtue. Americans are like Martha, the diligent housekeeper who complains to Jesus that she has been working all day while her sister Mary was sitting and listening to him teach. It’s hard to accept Jesus’ reply, that “Mary has chosen the better part.”

We resent having to work but feel guilty about not working. As a result, we’re never entirely free from work.

In Leisure, the Basis of Culture, Josef Pieper writes that in the Middle Ages, “it was held that sloth and restlessness, ‘leisurelessness,’ the incapacity to enjoy leisure, were all closely connected; sloth was held to be the source of restlessness, and the ultimate cause of ‘work for work’s sake.’”

Acedia is not idleness. It is instead a refusal of the gratuity of your own existence. It’s why I was weeding the path. It may be why the women were straightening up the kitchen.

If you think, as hardworking Americans typically do, that you need to earn your right to exist, then of course you’ll feel unmoored when there’s no work to do, when the work master doesn’t show up to assign you a task. It makes no metaphysical sense for you to be without work.

Pieper would tell us to accept our existence as one accepts a gift. You show gratitude not by earning back what you’ve received, as if you had incurred a debt, but by relaxing and contemplating, or even celebrating. All time is free time; enjoy it.

Around noon, just a half-hour before the end of the work period, I ventured outside. The young monks were just finishing up. The two women had left the kitchen. I sat in a chair next to a cactus in the courtyard, wrote in my notebook, and soaked up the sun. Surely I was taking Pieper’s counsel to heart.

Soon I realized that I was working after all. What I do — read, think, observe, take notes — often doesn’t look like work, even to me. That’s part of its appeal. But it also fosters leisurelessness. There are few times when I couldn’t be working. Work crowds in on leisure, unnoticed.

I made myself sit and observe, without working. I watched two ravens spiral overhead, then head off to the east over the mesa. I listened to a locust rev its wings near my feet.

Then the chapel bell rang out. I put my notebook away and hurried toward it for the next Liturgy of the Hours.

The workaday world drives us always to the next meeting, the next project, the next goal. Moments of true leisure and contemplation are hard-won and fleeting, even a bit unsettling. Unstructured time is a gift, but when you’re faced with it, there is often relief in knowing you have to be in a certain place doing a certain thing — even if it’s communal prayer, and nothing like work.

Jonathan Malesic is a theologian and writer living in Dallas who is working on a book about the spiritual costs of the American work ethic. His work has appeared in America, Commonweal, The New Republic and The Chronicle of Higher Education.