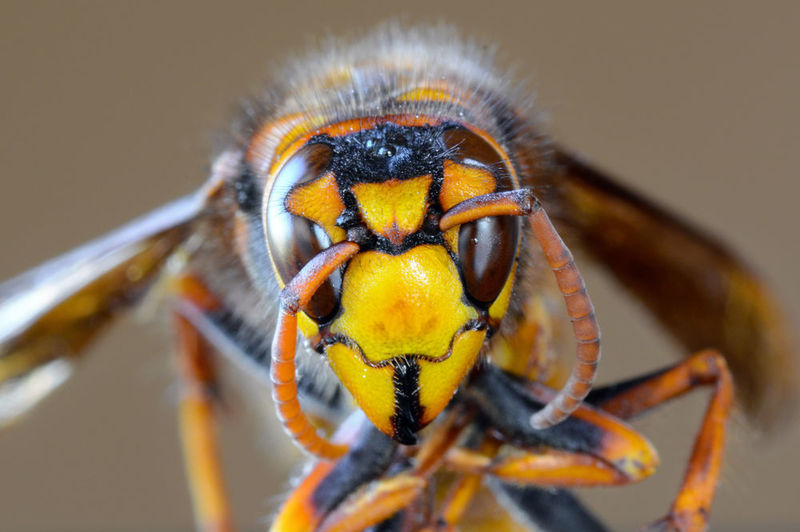 Not that you'd want to encounter one. Photo by David Carillet/Shutterstock

It took only about a week in early May for the news media to start walking back the scare stories that outlets of every stripe — from Fox to CNN — had ballyhooed about a looming nationwide invasion of the so-called “murder hornet.”

They had barraged nation’s frayed collective psyche, already battered by 24/7 coronavirus coverage, with warnings that huge hornets from Asia were about to swarm the populace, coast to coast, with their fatal stings. As people looked hopefully to an end of lockdowns, it was a “just when you thought it was safe to go back outside” moment.

By the time the newsies reported more measured facts about the situation, jittery people were squashing and spraying beneficial bees and other assorted winged hymenopterans, fearing they were the Asian giant hornet, another melodramatic moniker for the species scientists know as (Vespa mandarinia). Once the true details became evidence, the story disappeared.

The lurid warnings may not have been a case of now-proverbial fake news but were assuredly an egregious example of hyperbole: harmful and verging on the unethical. The latest threat of the week fizzled only after a few science-oriented news outlets revealed that the panic was based solely on four hornets, two of questionable identity and one dead, reported by people in Washington state — last year. The reports that appeared in May were mostly a rehash of news accounts that appeared in December. A few writers manage to justify their story by hanging it on a news peg, that spring starts a new season of feeding and breeding for the hornets.

Overhype on one hand, and lazy journalism on the other, distorted a story which, with a little digging to provide perspective, could have been informative and instructive, rather than the bust it became. The few reports that did put it in proper context mostly were by trained science writers, increasingly an endangered species in news organizations, who actually had done their homework.

As far as today’s journalism goes, I am an aging curmudgeon, among rapidly thinning ranks of those who started in the trade the way everybody once did, as a copy boy, in my case at the New York Daily Mirror, where my main responsibility seemed to be remembering which reporter liked Russian on his pastrami and which preferred mustard. It was 1959, the twilight of a glory time for newspapers, when scowling city editors sat enthroned surrounded by copy editors peering under green eyeshades at typing on sheets of copy paper.

Those crusty old-timers advised young reporters to approach a story from scratch, to make no assumptions and, as time permitted, thoroughly research background information; in the case of the horrifying hornets, background information that few heeded included the fact that a nest of them had already been found, and destroyed, last August on Vancouver Island, British Columbia, about 50 miles from the U.S. sightings.

Hardly mentioned, if at all, was that this is not the first time the reports surfaced that these big buzz bombs from Asia might gain a foothold here. There have been several such over the years, none of which panned out despite dire headlines. As far as I could determine, moreover, no article mentioned that the hornets have been in Europe since they were introduced in France during 2003 from — dare I say it — China. The hornet’s penchant for killing bees and other beneficial insects has mandated control measures costing millions in Europe but it’s a good bet that chances of a human being killed on the continent by one of these hornets are only a bit higher than death by Vespa.

Overall the number of people killed annually by the hornets in China and Japan — less than 100 and usually about 50 — is about the same as those from bee and wasp stings here and most because of mass stinging or anaphylactic shock.  Stories touted the hornet’s deadly sting, but many did not mention that it delivers venom less toxic than a honeybee but much greater quantity, which is why it has such a wallop.

Over the years, I have written lots about wasps, of which hornets are a subgroup, because articles editors frequently bite on them when queried.  Right, now, in fact, I am writing articles mentioning hornets, for a nature website and a pest management magazine. I have followed the saga of the “Asian giant hornet” for years as it has spread from one country to another. It is an unwelcome immigrant, but the threat it poses is readily manageable.

Speaking of hornets spreading around the world, I found no mention in the stories I checked that a close cousin of the Asian hornet, Vespa crabro, has established itself through much of the United States since it was introduced here — all the way back in 1840. Almost as big as the Asian, with a mean sting of its own, it has been labelled the “European giant hornet.” Most Americans are unaware of it, even though it has spread through the eastern half of the nation. As far as impact goes, it has been mostly beneficial because it kills several pest insects, preferring them, apparently, over humans.

If you ask an entomological purist about the European giant hornet, you might trigger a quizzically raised eyebrow. As far as taxonomic validity goes, there is no European giant hornet. No Asian giant hornet. And, certainly, no murder hornet. The Entomological Society of America Common Names Database, which has biblical authority among people who work with insects, recognizes none of these labels. Admittedly, the name “murder hornet” supposedly was coined by Japanese researchers. American scientists would consider the name X-rated.  Remember, however, the Japanese are the guys who gave us Godzilla.

Speaking of names, there are hornets and then there are “hornets.”  Hornets are wasps but not all wasps are hornets. About 20 or so wasps that belong to the genus Vespa, all of which are native to Eurasia and Africa. The so-called white-faced, or bald-faced, “hornet” of North America really is a yellowjacket wasp. No true hornet is native to the Americas.

Even if it becomes established here, the big hornet from Asia likely will be relegated to the ranks of the introduced insect boogeymen that weren’t. Red fire ants and African honeybees — “killer bees” — were the murder hornets of yesteryear, as far as the press is concerned.

Do they kill an occasional person? Do they cost a bunch of money to control? The answer to both is yes.

But an entomological apocalypse?  Most definitely not.

Ed Ricciuti has been reporting and writing for 60 years. He has covered assignments around the globe, written more than 70 books and is a contributing writer for Entomology Today, a project of the Entomological Society of America. When not writing he teaches martial arts near his home in Killingworth, Connecticut.