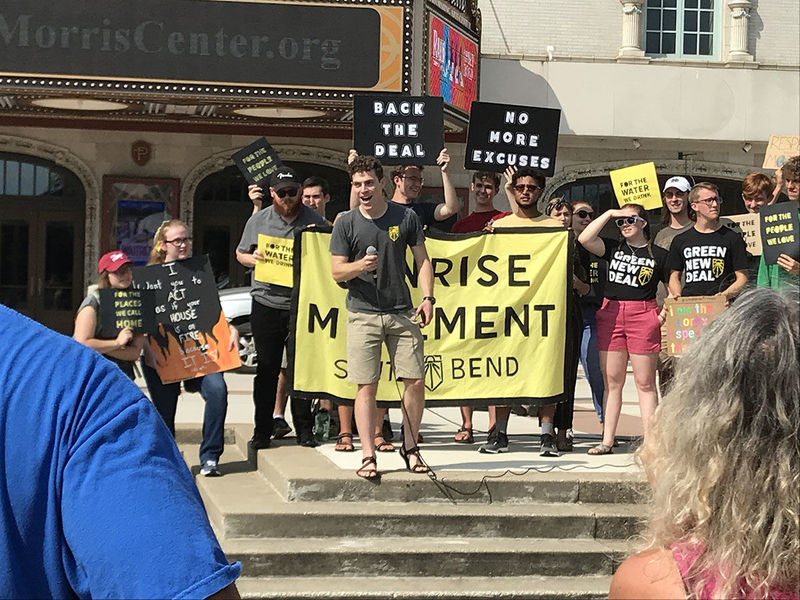 There looked to be about 30 of us gathered at the Main Circle at 10 a.m. Friday, September 20, the day of a global Climate Strike. The plan was to weave our way downtown where we would join other climate change protesters at a rally there — one of thousands throughout the world to call attention to the climate crisis, most organized by the young people who will be living on the planet whose very future is threatened.

Some carried signs. They said FOR THE AIR WE BREATHE and FOR THE WATER WE DRINK. But there was no chanting or fist waving, just conversations about plastic bags and fossil fuels and farms versus corporate agricultural practices.

Our small band appeared to double in size by the time we had traveled the length of Notre Dame Avenue, then angled downhill past Rocco’s, eventually crossing the river and arriving at the civic plaza about 45 minutes after setting out. Maybe 50 or 60 or 100 people were already gathered there, awaiting talks that were to begin at 11.

These people, too — mostly older folks — carried signs. They said things like OUR KIDS DESERVE A FUTURE and THE HOUSE IS ON FIRE. Sweaty from our hike downtown, I found a spot of shade, standing next to an older couple whose sign read WE’RE HERE FOR YOU Leif (13) Luke (6).

A few minutes later, a stream of young people coursed into the plaza, greeted by cheers. They had come from Goshen College, 35 miles away, and from the South Bend branch of Indiana University. Signs read ECOSYSTEM COLLAPSE = ECONOMIC COLLAPSE and IF NOT NOW, WHEN, attributing the last statement to Greta Thunberg, the 16-year-old Swedish girl whose plainspoken call for action has captivated the world and fueled this global youth movement. 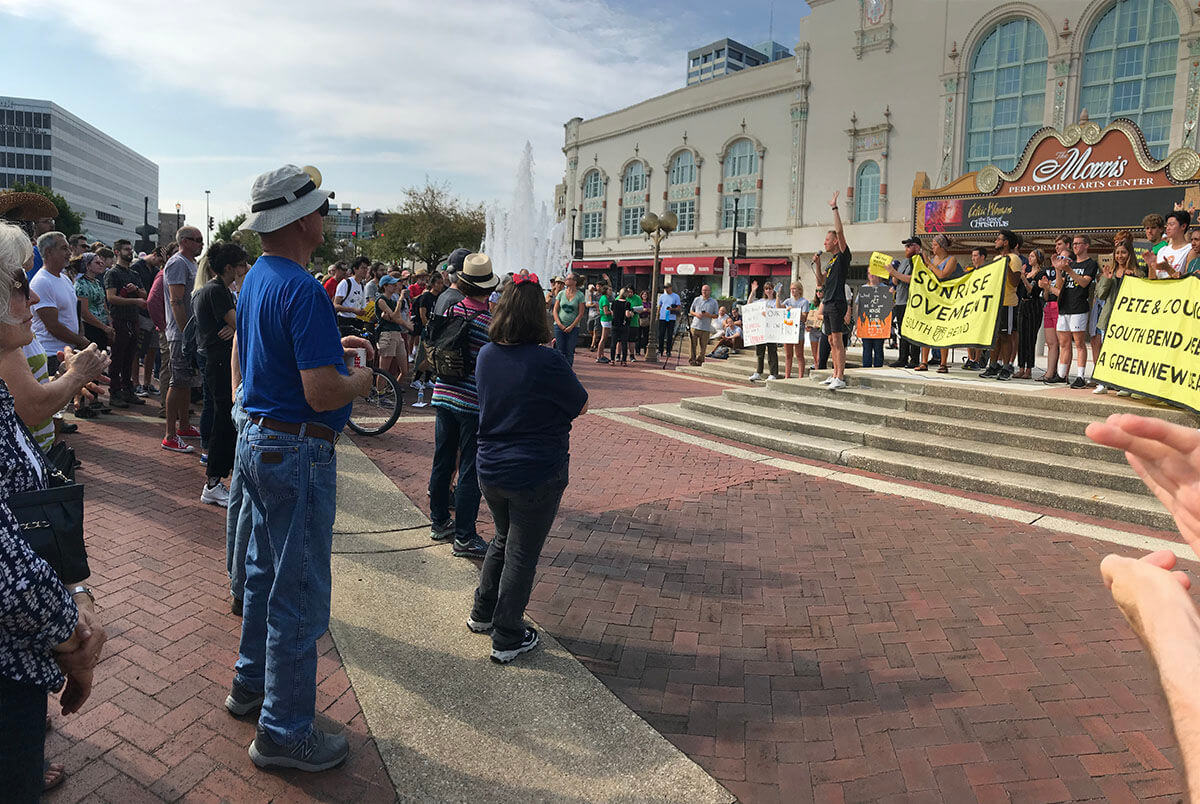 Now, at 11, Garrett Blad takes the microphone and calls the crowd forward, to approach the steps where a few dozen young people have assembled behind him, holding signs. Blad is a 2015 Notre Dame graduate and climate advocate who grew up in a farming community not far from the city. His bio says he has spoken to 150 audiences, more than 5,000 people, and his energy and ease in front of the crowd is convincing, compelling. He is also, among other activities, the national press coordinator for the Sunrise Movement, a youth-led organization that works for climate action and the Green New Deal.

Blad talks about his family farm and his grandmother’s way of life, about a future in jeopardy, that the climate crisis predicted decades ago is no longer theoretical, that powerful industry and government leaders have known this for a long time and have not done enough, in fact have sought to confuse people about the realities, have influenced the politicians, have denied what is happening.

A sign reads I CAN’T BELIEVE WE’RE PROTESTING FOR FACTS. Another says COME, LET US REASON TOGETHER.

Blad says that now this generation, the young people here today who face the consequences, and have felt powerless, are stepping up, in the millions, to stop this crisis, re-envisioning society, a society working for all of us, not just for those at the top. He says U.N. scientists estimate we have about 11 years to act in order to prevent the worst from happening, and we’re now gaining the power for a Green New Deal.

After cheers and applause from the 300, maybe 350 in attendance, Blad gives way to Julia McKenna, a Notre Dame freshman and graduate of a local high school.

LOVE YOUR MOTHER says one sign. NO MORE EXCUSES, says another. 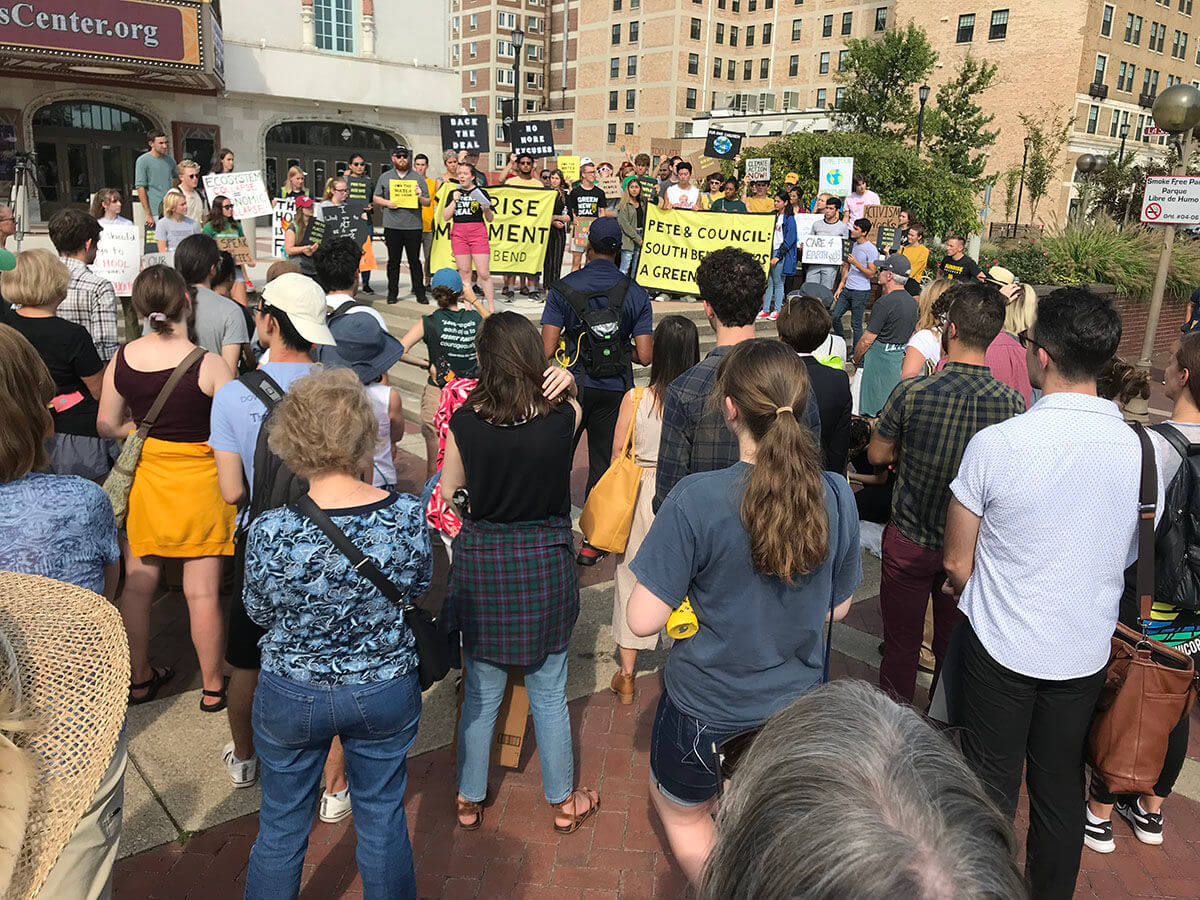 McKenna, who led an activist group that got South Bend to pass a climate ordinance last spring, says she’s just an average teenager, but driven to speak up because the planet’s future is in jeopardy and the prevailing inaction has gone on too long. Despite the warnings 50 years ago, she says, those concerned have not been moved to action. “I hate talking gloom and doom,” she says, “but it’s really urgent.”

IT’S GETTING HOT IN HERE

I SPEAK FOR THE TREES

McKenna is followed by a DACA student from Goshen College, then a local environmental activist fighting against plans to develop — “pave over” — thousands of acres of farmland west of the city and calling for the crowd to show up in a few weeks when the proposal again goes before county leaders. And that, of course, is where reality collides with the theoretical and philosophical, where the ideals of nurturing the land and protecting community and a way of life butt up against the lure of jobs and progress and financial prosperity in a region experiencing economic straits.

Where do you draw the line? When do you decide to say no more? And what is meant by quality of life — if the world itself is in existential peril?

Those questions will haunt us on other days. Today is a time for idealism and enthusiasm, for generating the groundswell of a social movement, for rhetoric and unity. To feel like you can really make a difference.

Two local Democratic candidates running for the House of Representatives tell the crowd they’re on their side, plea for votes, say they’ll make a change if elected. You want to believe it’s true.

More than a few signs read FOR OUR CHILDREN.