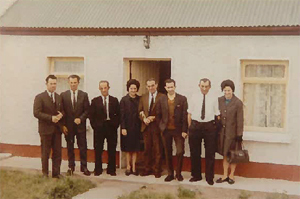 At 16 she was one of nine children to a widowed mother on a failing farm in Bonniconlon, County Mayo, Ireland. Shortly after their father’s death, the siblings were distributed to family members and friends, as their mother couldn’t afford to support all of them. An uncle from Chicago laid claim on my grandmother. She was given a piece of paper with her new address and some money and was dropped at a train stop. From there she would take a train and a boat and another train thousands of miles to reach Chicago.

While the promise of jobs and homes in America was luring boatloads of Irish from the many counties, towns and villages of the Emerald Isle, my grandmother begged to return home. Her request was denied again and again by her uncle, who insisted she repay him for the voyage he had funded. She moved in with a wealthy family on the Southeast side of Chicago to serve as a nanny six days a week, giving half her paycheck to her uncle and sending the other half home to her siblings until she had repaid her debt and paid the passage for several of her brothers and sisters to America. 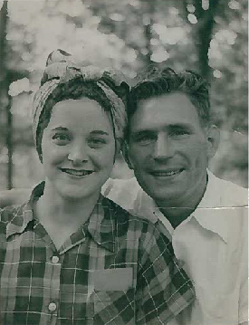 And so she continued her life, working in a factory and then a nursing home, meanwhile housing, feeding and supporting siblings, cousins and neighbors whom she helped bring over and start their own lives. The Irish banded together on Chicago’s Southside. They had dances and dinners, cheered for Irish football teams and traveled in packs. They fixed each other’s roofs, watched each other’s children and fed each other’s husbands. They married and had children who dropped the Irish brogue and grew up American, but with Irish culture woven tightly into their lives.

The children played on Irish field hockey teams, drank in Irish pubs, worked for Irish employers, attended their own Irish dances and listened to the Irish hour on the radio every Saturday morning to get news of the Irish community, even as many dispersed from the once-concentrated Irish Southside.

Then they married other Irish and had children. Children of the children of the Irish immigrant population. Children who have an even more watered-down Irish-American upbringing, but still some sort of one. I am one of those children.

I grew up 30 minutes west of the meat-and-potatoes district where my grandparents once rooted, and just far enough from that Irish enclave that my classmates weren’t all Irish. My classmates didn’t have immigrant grandparents, nor did they plug their ears every Saturday morning when the Irish hour, which actually lasts two hours but feels like 15 to a child who does not want to listen to jigs and reels over their cartoons, echoed throughout the entire house. They didn’t go to brunches at Gaelic Park, a familiar gathering place for the Irish community but a foreign land to us children-of-children who spent the meals trying to discern what exactly the man with the thick accent was saying and why our pudding looked like sausage. Nor did my classmates’ parents know everyone within a 50-mile radius whose names began with O, Mc or Mac and who had surnames like Padrig and Grainna and Siobahn, which sound nothing like how they’re spelled.

No, I certainly had a cultured upbringing in comparison to my classmates. At the same time, however, much of the Irish culture faded away as my siblings and I grew and protested, a complaint I now regret. The Irish hour doesn’t play too often in our parents’ house anymore, but remnants of their attempts to Irish-ize us still exist.

Months ago at a family wedding, my dad dragged me to the dance floor while a live Irish band played, eager to teach me the steps our older relatives know instinctively. My grandmother and great-aunt swung by us, gleefully laughing and perfectly stepping in time despite their creaking joints, while we clumsily tried to keep up with the spinning circle of people. After a few attempts, I realized my dad couldn’t remember a dance that had once been automatic to him. He quickly brushed it off and told me I’d have a better lesson with my mother or grandmother.

But maybe it’s more than that. Maybe he, too, has lost parts of the Irish culture that once were second-nature to him back when he lived with the Irish. Maybe the longer our family is American, the less we’re Irish.

I’ve told my 82-year-old grandmother I’ll return with her to Mayo under the feigned reason that she can see her home once more, but I think we both recognize that the Ireland of her childhood is long gone. The real reason for our trip, I’m sure, is to pass on to her grandchild the stories, traditions, memories and perhaps even a dance or two that shouldn’t be lost.