I’m going to start by saying that as I write this, I am, in fact, wearing red pants. If that strikes you as ludicrous, you probably won’t believe that even though I have never been to Italy, last week I was able to escape a few times a day from South Bend to Florence.

Both of these things — my red pants — more reddish orange, really — and Italy — are connected to each other and my begrudging acknowledgement of the miracles of 21st century technology.

That’s because this past week was Pitti. If you have no idea what that is, you probably do not follow men’s style that much, an interest I acknowledged last year in this magazine. “Pitti” is short for Pitti Immagine Uomo, a biannual men’s fashion expo in Italy. Pitti’s own modest PR says it is “the world’s most important platform for men’s clothing and accessory collections and for launching new projects in men’s fashion,” and it is probably not far off, but maybe not for the reasons originally intended. 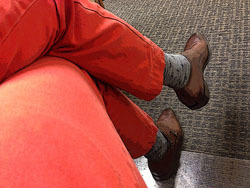 For the most important and most influential part of Pitti is not what is going on inside the expo, but the people coming in and out of it and the photos of them that get blasted around the world instantaneously through Twitter, Instagram, and a thousand fashion blogs and magazines. It is the pinnacle of “Street Style,” a genre of photography dedicated to capturing unique fashion looks in places around the world (To get a sense of this, visit The Sartorialist, a site run by photographer Scott Schuman, or take a look at anything by Bill Cunningham of The New York Times, who is probably the originator of the form).

So on a cold, dreary winter day in South Bend, Indiana, a few short clicks on the Internet were all that was needed for me to travel to the most stylish place on earth. And I’m sure the story is similar for people interested in all sorts of different subcultures — the Internet affords us a level of accessibility that simply did not exist before.

Which brings me to my reddish, orangey pants. Absent the stream of images from Pitti and other stylish parts of the globe, it’s possible I wouldn’t have wanted them, or even known where to find them, and certainly not had the first clue as to how to wear them (the key is to keep everything else basic and in plain colors). But the boundaries to that sort of knowledge — and many other, vastly more important things — have largely been knocked down if you have the desire to find out.

There is an Italian term, sprezzatura, used to denote the sort of fierce casualness, or blasé perfection, which is the height of stylish intent. It is not something that is easy to learn in South Bend without a Twitter feed. And man, can you go overboard. Love and hate get sped up on the Internet, and there is a lot to laugh at in street style, not to mention the weird meta process of some people whose sole ambition when getting dressed every morning appears to be making it onto a fashion blog.

And at the moment, tomorrow sure feels like a day for my bright blue pants.

Liam Farrell is this magazine’s senior alumni editor. Contact him at lfarrell@nd.edu.