One night at dinner ages ago, I abruptly announced that I wanted to go to nursing school.

Nancy, my beloved, looked up from feeding our infant daughter and said, “You’re crazy.” She added, “You have no background in science or healthcare, and nursing school is really hard.”

I shrugged and replied, “How hard can it be?”

Boy, did I ever come to regret that comment. Nursing school about knocked me out and I developed a deep respect for those who survive. Now that I’m a nursing instructor myself, I feel obliged to eat my words on a regular basis. 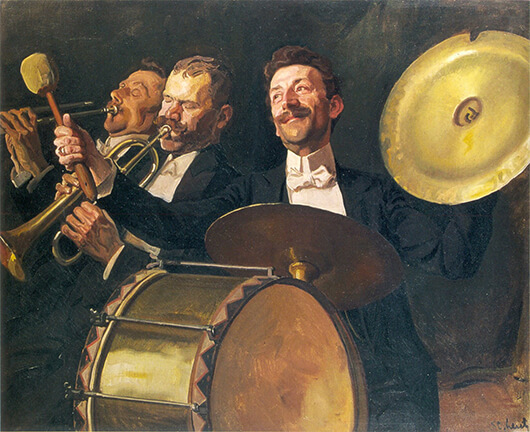 Last year, after attending the Notre Dame Summer Band’s free concert on the Irish Green, I made another abrupt decision. Since the band is open to amateurs from the area, I determined to join up next go around, which happened this past June. I hadn’t really played concert percussion since high school — oh, some 35 years ago — and the only time I pick up sticks these days is when I sneak in a few fills on my son’s drum kit.

But I was a pretty hot drummer in my day (as I recall), so when I thought about joining the summer ensemble this year, I once again made the presumptuous “How-hard-could-it-be?” leap.

Once again, I’m eating my words.

I should’ve known better when I contacted band director Sam Sanchez to sign up. I was glad he didn’t balk at my decades-long performance hiatus, but maybe I should’ve given greater heed to the rehearsal schedule he provided: A mere five meetings in the weeks leading up to the June 28 concert.

To be honest, I ought to have cleared my June calendar to devote to extra time in the practice rooms.

Nonetheless, I showed up for the first rehearsal at Ricci Band Building full of confidence. I headed to the back of the room where I spied the bass drum, gong and snares. Patrick and Jake were there warming up along with Luisa, Matthew and James — all Notre Dame marching band regulars during the school year. I also met Lauren, a high school student, and Jordan, who goes to another college. I saw other seasoned musicians among the brass and woodwinds, but I was the only old-timer among the drummers.

Sanchez got the rehearsal rolling with a brief history of the Summer Band series. I was joining its ninth iteration, and Sanchez confirmed that its overall membership — about 100 strong — was as diverse as the percussion section’s: Notre Dame students, alumni, faculty and staff along with musicians of all ages from the community, all coming together to enjoy a musical experience and share it with the public. “It’s not exactly a July Fourth concert,” co-director Alison Thigpen later added, “but it’s close enough — and we include all the expected favorites.”

True. Rummaging through the music, I discovered a couple John Philip Sousa standards, along with “God Bless America,” “America the Beautiful” and an armed forces tribute. In addition, there were some contemporary pieces, including a Pirates of the Caribbean medley and the Captain America theme song, not to mention Notre Dame’s alma mater and fight song.

No one was directing traffic with regard to percussion assignments, so we gravitated to instruments and parts based on need, skill level and an unspoken egalitarianism. The ND students were generous in making sure everyone had good opportunities to participate.

At one point, I tried my hand at a timpani part but floundered miserably.

“How about I trade you for cymbals on that one,” I suggested to Matthew. He readily agreed, and my musical presumption dropped a couple pegs.

It dropped several more during the next rehearsal when I missed an important extended rest during a run-through of Franz von Suppé’s “Poet and Peasant Overture.” Everyone else silently awaited Director Sanchez’s release, but I let bass drum mallet fly with extra oomph — an inadvertent and humiliating solo.

Sanchez, himself a percussionist, looked up at me with mock despair. “Like a spear through a director’s heart,” he said.

Everyone chuckled; I winced and turned red. The rehearsal continued, and I determined not to goof again.

Of course, I did — and on the Victory March of all things, the last piece of the night. “Is there something I can take on this?” I asked Matthew, as Thigpen asked us to pull out the sheet music. “I’d love to tell my family that I get to play on the fight song.”

“How about bass drum?” he said. An opportunity for redemption!

I followed the music closely, keeping an eye on Thigpen’s baton. “Not bad,” I thought to myself as we came to the end. “Maybe I can do this after all.”

Then, again, a sudden silence followed by another loud bass drum solo, and, again, more chuckles and chagrin from a director. “Remember,” Thigpen said, “no stinger” — a reference to a concluding note with emphasis at the end of a march. It’s a term I wasn’t familiar with, so I’d missed Thigpen’s correction to our scores.

The night of the performance on June 28 arrived, and I showed up early and a little nervous, but psyched to perform. The final rehearsals had gone well — the band sounded great, and I avoided any glaring mishaps. Everyone was decked out in green Notre Dame Summer Band polo shirts, smiling and chatting. There was a cool breeze, and it looked like the dark clouds were holding off to the west. An audience took shape as we warmed up: families spreading out blankets, folks setting up chairs, kids flitting around here and there. My own family showed up in time to get decent seats near the front.

Just before the concert kicked off, I invited my son Nicky, a budding drummer, to come up and see the instruments. He met all the percussionists, and Luisa even gave him a tutorial in kettle drum technique. Nicky beamed.

Local radio announcer Jon Thompson welcomed the guests and introduced the band, and we commenced. The mood was buoyant, the audience generous in their applause, and the air was filled with rich sound. People young and old tapped their feet to the Glenn Miller and Motown medleys — a good sign.

For my part, I managed to keep time, proudly pounding drums and crashing cymbals alongside my more proficient colleagues. As we closed out the program with Victory March, the audience sang along with pleasure, and I avoided a repeat surprise bass drum solo at its conclusion — a victory indeed.

Later, before we loaded up chairs and instruments into waiting trucks, we had a chance to greet friends and family in the audience.

“Can I play in the band next summer?” was Nicky’s first comment — no surprise.

What I didn’t expect was the assessment of my teenage daughter, Cecilia. “Pretty lit, dad,” she said.

It was an unprecedented and unscripted stinger of praise, and it capped off a wonderful night.