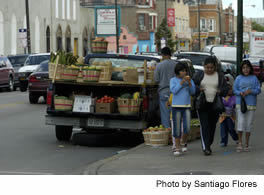 The Metropolitan Chicago Initiative (MCI) occupies a spacious office above a bank in the heart of a small, blue-collar and increasingly Hispanic suburb just west of Chicago called Berwyn.

The MCI is an arm of Notre Dame’s Institute for Latino Studies, which was created in 1999 to study critical issues facing Latinos in the United States. If you think of the institute as an earnest academic entity, then consider the MCI its gruffer kid brother. It opened its doors almost four years ago with two employees and now boasts a staff of seven. Its goal from the beginning was not merely to study the Latino community around it but to improve it.

With sleeves rolled up, officials at the MCI—and the various researchers employed by them at any one time—are out on the streets, in apartments and at school board meetings, conducting surveys and assessments on topics from health care to job growth to minority education achievement gaps. All this is in an effort to bring vital social and economic issues as they relate to area Latinos to the forefront of policy discussions.

Last year, the MCI embarked on its Chicago Area Survey—believed to be the most sweeping survey of a Latino community ever conducted in the Midwest.

Throughout the summer and fall of 2003, the MCI dispatched more than 40 researchers across Chicago and the surrounding suburbs in an attempt to gain the most comprehensive portrait ever produced of the Latinos in the region. The researchers helped 2,300 randomly selected residents (1,500 Latinos, 400 African Americans and 400 Caucasians) complete a questionnaire the size of football play book.

The resulting data, officials hope, will produce a powerful declaration about Chicago-area Latinos and provide answers to a host of essential questions about them: Who are they? How are they doing? What do they want? What can they contribute? How do they fit in?

A number of observers already are applauding the survey and stressing a similar point regarding this growing population: It’s about time someone found out what they’re thinking.

By the middle of this century, roughly one in four persons in America is expected to be of Hispanic origin. In and around the Metropolitan Chicago Initiative’s home base, Berwyn and the neighboring suburb of Cicero, this changing demographic has made itself felt. Between 1990 and 2000, Cicero’s Hispanic population more than doubled to about 66,000, or roughly 76 percent of the town’s total population. In Berwyn, the town’s Hispanic population jumped from 3,500 to about 20,500 and now constitutes about 40 percent of the total population.

The changing demographics in these suburbs are apparent all around. Just outside Berwyn’s small downtown, with its sports bar and designer coffee shop, sits a Hispanic grocery store and several restaurants advertising Mexican dishes. Along the town’s tree-lined streets, Hispanic music emanates from passing cars, while brown-skinned children run across the lawns outside small brick bungalows and three-story apartment buildings.

It was in such homes that the MCI researchers would help residents answer a largely multiple-choice survey containing more than 700 questions covering such areas as ethnic relations, living and work conditions, and political and religious beliefs.

“It was a long questionnaire, and it took a lot of time from everyone involved,” says Tim Ready ‘73, director of research at the Institute for Latino Studies. “But it was what we needed to do to get detailed information.”

MCI researchers also asked 1,000 non-Hispanic residents to complete a separate survey that sought to capture their overall view of their Latino neighbors. “There seems to be a lot of information about what African Americans and whites think about each other,” says Sylvia Puente, MCI director. "But there is not much out there that tells us what these two groups think about Latinos. It’s all part of our effort to gain a fuller picture of the Hispanic experience."

The MCI has enlisted the help of about 20 local scholars to analyze the survey data and help formulate its findings. One of those scholars is Maria de los Angeles Torres, a professor of political science at DePaul University in Chicago.

“I’m extremely excited about this initiative,” Torres says. “There is such a lack of information about Latinos in this region. By obtaining so much valuable data on Midwest Latinos, we’re going to provide a piece to the national puzzle that’s been missing.”

But will mainstream America care? Torres acknowledges the irony that has accompanied the Latino population in the United States—as it continues to grow bigger, it remains largely without power. It could be that the Chicago Area Survey will reveal that lack of power. Indeed, one need not be a statistician to guess that many Latinos in this country are riding a rough and bumpy path toward their American Dream.

And yet the fact that the University would devote the time and resources to taking the pulse of this population leads one to an equally clear conclusion: It seems wise to learn as much as we can about the growing Latino population right now—so we all can benefit down the road.