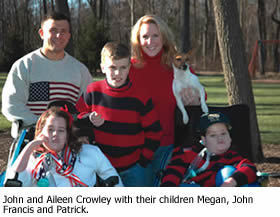 Ten years ago John Crowley was heading up the ladder of success. He had earned a bachelor’s degree from Georgetown’s School of Foreign Service in 1989, a law degree from Notre Dame in 1992 and an MBA from Harvard in 1997, all leading to a job he enjoyed in management consulting in San Francisco. But one day in March of 1998, in the office of his daughter’s pediatrician, the trajectory of his life took an unexpected and frightful turn.

The doctor told Crowley and his wife, Aileen, that tests indicated their 15-month-old daughter, Megan, was suffering from Pompe disease, a rare genetic disorder related to muscular dystrophy that afflicts fewer than 10,000 people worldwide. The couple had their first inkling that something might be seriously wrong with Megan when she was 5 months old. By that age, most infants begin to roll over and crawl. Their daughter had difficulty turning over and never even attempted to crawl. They also noticed she had trouble swallowing.

The doctor said Megan’s problems were due to a genetic enzyme deficiency that made her body store a sticky substance in her muscles, eventually destroying them. By the age of 2, afflicted children usually require a respirator to breathe, by 4 they are paralyzed and by 5 most die from respiratory failure. There was no cure, no treatment, he said.

The news left the couple reeling. When it seemed things couldn’t get worse, they learned a few months later that the second of their three children, Patrick, who was a year younger than Megan, also suffered from the disease. Once they got over the shock of the diagnoses, the family moved to New Jersey to be close to doctors specializing in Pompe disease, John took a job with Bristol-Myers Squibb, and the Crowleys resolved to do whatever they could to find a cure for their children.

Frustrated with the slow pace of Pompe research in the pharmaceutical industry, John left his job in 2000 to head up Novazyme Pharmaceuticals, Inc., a tiny biotech firm that had a promising therapeutic approach for Pompe disease. What it didn’t have was the funding to develop that therapy.

The company desperately needed Crowley’s skills. In his first week as CEO, he was horrified to discover the firm had only $37,000 in its checking account. To keep the company temporarily afloat, Crowley and his wife took out a second mortgage on their New Jersey home for $100,000. Within a year, John had raised $27 million in venture capital for the firm and brokered a deal, selling Novazyme to a competitor, Genzyme Corporation, for $137.5 million. With the acquisition, Crowley was named a senior vice president and head of Genzyme’s Pompe program.

In a cruel irony, just when scientists finally had a test version of a drug ready, the Crowley children were disqualified from the initial trial. “That was more than frustrating,” John recalls. “Even though the FDA was comfortable with Megan and Patrick being part of the trial, the hospital’s Internal Review Board rejected their application because they claimed it was a conflict of interest for me to be an executive of the company and have my children treated.”

Fortunately, a few months after the first drug trial, another hospital accepted Megan and Patrick and they became the 27th and 28th patients in the world to be treated with the drug called Myozyme. To make sure his children could qualify for treatment, Crowley resigned from Genzyme. Since then his daughter and son have received twice-weekly infusions of the drug. While the therapy is not a cure, it has improved their condition. Most dramatically, the drug has reduced the size of their dangerously enlarged hearts, and Megan and Patrick, now age 10 and 9 respectively, have surpassed their initial life expectancy.

“The kids are doing pretty well,” John says. “The medicine has stabilized them, and they’re able to go to public school.” Their health remains fragile, however, and they still require wheelchairs to move, ventilators to breathe and food pumps to eat.

In a hopeful recent development, this past December Amicus Therapeutics, a new biotech firm that John has headed since 2005, began clinical trials of a novel drug for Pompe disease. Instead of replacing the defective enzyme, which is the conventional approach, the Amicus drug binds with the patient’s own enzyme, tricking the body into thinking it is “good” and causing it to do its intended job.

John and Aileen’s efforts for their children have not gone unnoticed by the media. Besides being the subject of countless newspaper and TV interviews, a critically acclaimed book, The Cure: How a Father Raised $100 Million—and Bucked the Medical Establishment—in a Quest to Save His Children, was published last fall. Written by the Pulitzer-Prize-winning Wall Street Journal reporter Geeta Anand, the book is the basis for a Hollywood movie about the Crowleys. The film, which will star Harrison Ford, is slated for release in 2008.