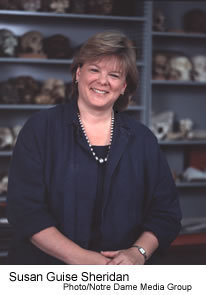 The Dead Sea scroll bones tell a tale. Unfortunately, it’s much sketchier than Susan Guise Sheridan and other anthropologists had hoped it would be.

After a recent analysis of skeletal remains exhumed from 18 graves at Qumran, the archeological site in Israel associated with the ancient Dead Sea biblical scrolls, the Notre Dame forensic anthropologist can say this for sure: One was a teenager who had been ill most of his life, another was an old man who died in his 60s, another was an older woman, and the remainder were adult men, between 30 and 60 years of age. Nails from the coffins appear to be Roman in origin. And that, more or less, is it. Scholars have long believed the bones could shed light on the community that created the earliest extant biblical texts dating to the first century A.D. However, Sheridan says working on the Qumran remains has been frustrating. Improper storage after excavation, a small sample size and contamination prevented her from conducting a full scientific analysis that would have yielded more than individual life details. Over the years, heat and salinity have eroded many scientific clues. The Notre Dame anthropologist also was hampered because in most cases only portions of the cranium and pelvis had been exhumed instead of full skeletons. For these reasons, Sheridan was unable to answer larger questions about the community’s diet, overall health and other characteristics of the population. Perhaps most critically, she was unable to assign a date to the remains through carbon-dating techniques. The bones lacked enough collagen for analysis, and wood from the graves had been contaminated by the paraffin preservation method used by earlier anthropologists. For nearly half a century an aura of mystery has swirled around the bones, which were exhumed in the early 1950s. Shortly after being cataloged by age and sex, the material vanished. Apparently, the collection was subdivided and “lost” in museum storage for nearly 50 years, with some going to France, some to Germany and the remainder staying in Jerusalem. Finally, in 1999 a team of German researchers came upon their portion of the collection and published an analysis of 22 skeletons. Shortly thereafter the Jerusalem collection was found in an unmarked storage box, and the chief archeologist of Jerusalem’s Ecole Biblique invited Sheridan to examine the material. He was familiar with the Notre Dame anthropologist because for many years she has been studying skeletal remains from an ancient Byzantine monastery on the grounds of the French school, which is the oldest research institute for biblical and archeological study in the Holy Land. Subsequently, Sheridan also analyzed the remains in Paris, and this past summer she inspected those in Germany. This made her the only anthropologist to examine the entire collection.