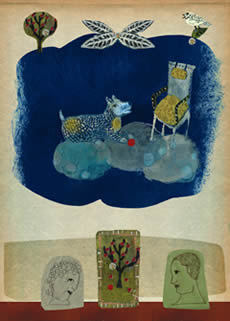 My understanding of the Divine Mystery goes back to 1994 with a sleepless night in a Japanese hospital where I was recovering from a near-fatal illness. I had been transferred from the ICU to an eight-person ward where a patient in his mid-30s with advanced lung cancer periodically pierced the night calm with agonizing moans of pain. At first I felt something close to resentment for this intrusion into the relative silence, but I soon realized what the phrase “arrogance of good health” meant. I was going to live; he was going to die.

As the night moved slowly on, my upset turned to compassion, and I found myself recalling all the people I knew who had died — starting with Mrs. Clash, our next-door neighbor who died on Thanksgiving morning when I was 8. As my list progressed, it led to a startling awareness: This is my “Communion of Saints.” They are, I believe, with God.

After leaving my teaching job in Japan, retiring and working as a hospice volunteer for 12 years, my “Communion” has grown considerably. It’s a group that is certainly eclectic and hardly meritorious by Church standards, but I have no doubt about its members’ “salvation” or concern about a “hierarchy in heaven.”

Isaac and Katy, a Jew and an Irish Catholic in their early 90s, had recently celebrated 20 years of marriage. They had been high school sweethearts in Nova Scotia, but parental prejudice on each side severed the relationship. They had each enjoyed good lives and successful marriages — until the deaths of their respective spouses. Their serendipitous reunion in Seattle brought them into my life. I met them in a retirement facility, where Katy was on hospice care with multiple health issues.

In our first meeting my preference for piano jazz surfaced, and Isaac immediately wanted to know my favorite performer. I could tell by his tone this was not merely a polite conversation question, so I mentally raced through my list before settling on Oscar Peterson. I could tell by Isaac’s and Katy’s responses that I clearly fell a bit short. Among other life pursuits, Isaac had played jazz piano professionally, as had Katy’s first husband, and there was only one acceptable answer — Art Tatum.

Our subsequent visits entailed many Tatum anecdotes and the disclosure that Isaac had donated to a local university his “complete” collection of Tatum’s recordings. I was able to bring CDs of more current artists from my collection, and Isaac paid me a genuine compliment by inquiring with interest, “Where did you get this stuff?” He clearly had not kept pace with the field, but we agreed if there ever was a stopping place, Tatum was the right one.

With Katy’s decline, Isaac’s duties included grocery shopping, which provided treats equal to enjoying good jazz. Isaac proclaimed to be an “abjured Jew,” but — other than in a theological sense — this was impossible to perceive. Most of his working life was in the dry goods business, and that success permeated his demeanor. At the supermarket he would caution me to “get to know the manager of the meat department,” whom he always sought out and who always gave him preferential treatment. He couldn’t buy anything without first checking the expiration dates.

I’m not a shopper, but with Isaac it was an adventure . . . and fun. One day in the deli section, as he carefully perused the packaged bacon, I asked, “Isaac, what are you doing?” He replied wide-eyed with a hint of a smile, “It’s kosher!” and put it in the cart.

Much later, after Katy had died and Isaac was also on hospice care, his sense of humor didn’t fade. One day, while he struggled to get to the bathroom from his bed, I was walking by his side and he came up with, “Now I know why they call this the last mile.” Near his last days, however, the real Isaac was absent, given to delusions and “wanting to go home.” I believe he meant it in the literal sense rather than metaphorically, as is often the case with patients. It was not an exit he would have scripted, but choice was not an option, and I was told by his caregivers that he was truly at peace when he died.

Katy never lost her Irish grace and charm, though among her many ailments was a loss of peripheral vision and fading eyesight in general. I never heard a complaint, even though her hobby had been designing and sewing incredible creations for her Barbie doll collection. She often spoke of her brother, a Jesuit in Africa who wanted to stay there for life. Later, when bedridden, Katy was not able to go to Mass, but her Catholicism was like a second skin.

Once she asked me to pray a rosary with her on my next visit. When I showed up with my rosary and confessed that it had been years since I last prayed one, she immediately slapped my hand — not gently — and told me, “You ought to be ashamed!” I couldn’t resist replying, “Yes, Mother Superior,” which produced a forgiving smile.

Another highlight occurred on a Good Friday when she asked me to read her the Passion of our Lord. Even as a lector in our parish I don’t recall reading a Scripture with such a depth of feeling or receiving such an appreciation as she showered on me. Much earlier, Katy’s aside about the merits of papal celibacy would require a context that cannot be replicated, so it shall remain “our secret.” I doubt its relevance to her sainthood!

Not all hospice experiences have such a positive ring, but the complexity of Alex and his family deserve telling. Alex was born in Jerusalem, raised in Jordan and adopted by a Catholic couple in the United States, where he was enrolled in high school. He became involved with a girl who was a Presbyterian. This ultimately led to a complete break with his adoptive parents, but love found its way to the state university where Alex proceeded to graduate at the top of his pharmacy class and marry his high school sweetheart. They soon had a baby girl, and all was fine until their 4-month-old daughter acquired spinal meningitis.

I met Alex and his family when he became a hospice patient with advanced cancer of the tongue. His wife, now a Jehovah’s Witness, needed respite care for Alex while she and their now 40-year-old daughter attended services at the Kingdom Hall. The daughter could not speak, was not toilet-trained and had made minimal mental progress. It took a while before the magnitude of this family’s trauma registered with me because of the grace with which Alex and his wife handled it.

My visits with Alex in his home generally were spent watching baseball on TV and simply getting to know each other. Talking was not easy for him, but he was eager to converse with a man, and his pain meds made conversation possible. His wife insisted on providing dessert for us. They were most gracious and appreciative hosts.

As Alex’s condition deteriorated, the family stress increased. Differences over the care and treatment of their daughter were evident, but Alex’s inconsistent and sometime irrational behavior contributed also. One evening Alex vented his frustration with his cancer and sense of aloneness. My response was something I regretted as soon as my words became sound. “God loves you, Alex.” His look and the question that followed remain a searing memory. “If he loves me, WHY . . . ?”

Fortunately, we had better moments before Alex’s decline led to his being first hospitalized and then placed in a nursing home. Neither option was acceptable to him. Violence and escape attempts became a normal pattern. Alex was taken off hospice care, but I was able to locate him at a nursing home and went to see him. He was sitting alone, constrained in a wheelchair in a hallway. I was pleased and surprised that he even recognized me, as he looked in considerable pain and was unable to speak with any clarity. However, we did “connect,” for which I am most grateful as I could feel his desperation and loneliness.

As I left the secured ward, I spoke with the nurse who had just come on duty and who had no idea who Alex was, but knew he was being moved to a private room. I poured out a brief history of Alex that brought surprise and wonder, and which I hoped would lead to more caring attention.

I found out that Alex died that night, so the “rescue” he seemed to want from me was realized from a more able source. His gracious and strong wife, his forever-baby daughter and his incredible journey are the stuff of sainthood in my book. And my “judgment” of Jehovah’s Witnesses has become softly muted.

Unlike many of my patients over the past 12 years, Ralph and I had little, if anything, in common. He was raised on a farm and had no time for sports or education beyond high school. His only musical taste favored country-western. He was in combat in Vietnam; I was a noncombatant in Korea. He became a successful one-man roofing contractor whose life was being cut short by advanced lung cancer. I was healthy and a dad whose children took broken toys to their mother for repair.

It’s funny how the externals can fool you, though. Our weekly visits showed what really matters between humans starts with respect. And that blossomed in our first meeting and grew as naturally as a tomato ripens with sunshine. Friendship may be too strong to describe what existed, but the connection was real and rewarding.

Ralph eventually left hospice care for treatment at the Veterans Affairs hospital. I only visited him once, as the hospital was quite a distance away, and he seemed to be almost comatose. I didn’t think he had long to live. He once had told me he had no real fear of death but had some concerns about knowing “when.” I’m not sure if he ever knew the “when,” but I found out he hung on to life for a couple more months. I wasn’t surprised at the will and strength he must have exerted. Our final conversation took place beside the urn at his funeral Mass. The connection felt as real as ever, and I never even knew he was a Catholic.

Whenever I recall such hospice experiences and consider my personal Communion of Saints, I think of a word from a book by Heather Lende, Take Good Care of the Garden and the Dogs. The word is “namaste” (NAH-mahs-stay), and the brilliant and insightful Joan Chittister, a Benedictine nun, defines it as, “The divine in me greets the divine in you. The Holy Spirit in me touches the Holy Spirit in you.” That captures the hospice experience perfectly and provides a cornerstone for my litany of saints. So . . . namaste.