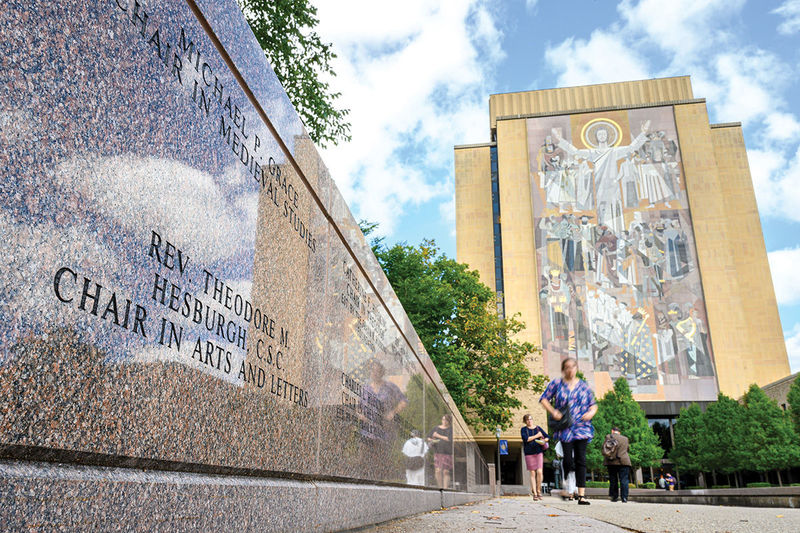 Back in the 1950s, when University president Rev. Theodore Hesburgh, CSC, was envisioning how to lead Notre Dame into the front ranks of American higher education, he made a crucial discovery. The nation’s best schools had the largest endowments. So he made that a priority — creating a healthy endowment that would generate income for financial aid, library holdings, faculty salaries and other academic endeavors, and be there in perpetuity.

Notre Dame educated its graduates on the importance of the endowment, and over time has benefited from the generosity of its alumni and friends, a thriving development operation, wise fiscal management and stellar investment strategies. The University has been so successful in building its endowment that, when Congress passed the Tax Cuts and Jobs Act in 2017, Notre Dame was one of about 30 private colleges and universities targeted for an excise tax on endowment earnings.

It’s there on the list along with Harvard, Princeton, Yale, Stanford, Dartmouth, MIT and Cal Tech — an indication that Hesburgh’s aspirations for Notre Dame, now ranked academically among the top 20 U.S. colleges and universities, have been realized.

The endowment tax, which became law on January 1, 2018, imposes a 1.4 percent excise tax on net investment income at private schools with at least 500 tuition-paying students and assets of at least $500,000 per student. Notre Dame’s $11 billion endowment qualifies, and the University estimates the tax will cost the institution about $8 million to $10 million annually — an amount, it is pointed out, that could be going toward financial aid for needy students.

About 60 percent of the $154 million that Notre Dame provides annually in financial aid is underwritten by its endowment — a percentage the University has worked hard to increase over the years. “In trying to maximize the amount of financial aid funded by the endowment,” says Andrew Paluf ’80, associate vice president and controller of the University, “having to pay this excise tax moves us in the wrong direction.”

In response to the endowment tax, University president Rev. John I. Jenkins, CSC, ’76, ’78M.A. noted that public universities were exempt, even though some state schools have larger endowments than those saddled with the tax, while other private institutions were also exempt “due to the vagaries of the formula.” He added, “I agree with those who suggest the tax was politically motivated.” Jenkins pointed out that Congress initially identified 160 universities to tax. “By the time the bill passed and various interests had prevailed,” he said, “Congress had manipulated the formula to bring the number down to 30.” Making the tax “politically palatable,” he said, were “negative public perceptions about higher education.”

While the bill caused consternation among leaders in higher education, the endowment tax has presented Notre Dame’s financial officers with a thicket of uncertainty as they puzzle over the law’s implementation. Because the law was enacted so quickly, little guidance has come from federal authorities, and any counsel has been unclear and short on detail. One suggestion from government officials was to follow those guidelines directing private foundations — a very different species from colleges and universities, which operate so many auxiliary enterprises in their multifaceted educational missions.

In the absence of clearly defined regulations have come questions about royalties and dividends and corporate sponsorships. Do dormitories supply rental earnings, or are the residence halls central to Notre Dame’s educational mission? And what about capital gains taxes when benefactors donate stocks to the University?

The schools and government tax officials have been sifting through such dilemmas during a comment period that ended October 1, 2019. In doing so, Notre Dame has joined a consortium of affected schools while also pursuing its own discernment because of issues unique to the University. Approaching a deadline of November 15 to calculate its taxes under the new law, it is working toward a position paper that makes reasonable arguments based on its best readings of the guidelines.

Bringing the institution into compliance has been an all-hands-on-deck effort of University auditors, accountants, investment officers, tax experts, business and financial leaders.

Officials point out that the government’s total anticipated earnings from the endowment tax on the 30 schools is about $200 million. The 2019 federal budget is about $4.4 trillion.