The fishermen of Lampedusa, a tiny Italian island 180 miles north of Libya, are seasoned professionals. Over the years, they have come to know the ongoing refugee crisis from daily experience. These fishermen might ignore the statistics, but they confront an inescapable truth: they live on the world’s deadliest frontier.

They know they should avoid the stretch of sea to the south — their nets are likely to be torn by the many shipwrecks on the seabed. They know the Mediterranean Sea constitutes a lethal border for people originating in Syria, Afghanistan, Iraq, Eritrea, Pakistan, Nigeria, Somalia, Sudan, Gambia, Mali, Bangladesh, and other refugee-producing countries. What is it that distant observers don’t know or have forgotten, buried between the lines of the news cycle?

1. The current refugee crisis adds a new layer to an entrenched issue. Italy, Spain, Greece, and Malta have been experiencing the challenges and tragedies of maritime migration since the early 1990s. The world first took notice on October 3, 2013, when a boat capsized in the vicinity of Lampedusa, taking the lives of at least 366 refugees mostly from authoritarian Eritrea. One week later, on October 11, another shipwreck between Libya, Malta and Lampedusa resulted in the deaths of dozens more refugees, mostly from Syria.

In the immediate aftermath of these events, the Italian government launched a meticulous search and rescue operation named “Mare Nostrum.” Over a 12-month period, some 170,000 people were rescued at sea. The operation, coordinated by the Italian navy, soon became controversial. Elsewhere in Europe it was perceived as facilitating unauthorized migration. Rather than engaging the limitations of existing legislation, especially in light of Syrians’ displacement, Italian and European Union politicians merely terminated the operation. Italy and Greece should secure their borders, is the 20-year-old demand. But how do you fence the sea? How do you secure the fault lines between Europe, Africa, and the Middle East?

2. If the sea could speak, what would it say? That there are no coincidences. On April 19, 2015 an estimated 850 people from Eritrea, Syria, Ethiopia and several West African countries drowned north of Tripoli. They were on their way to Lampedusa, crammed into a single boat. 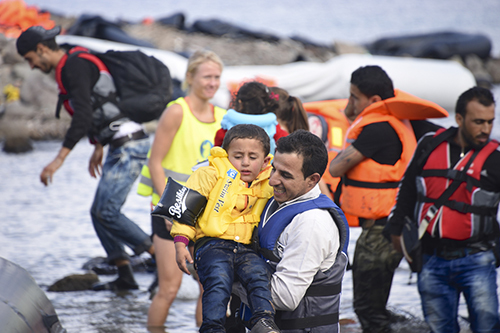 Refugees resort to crossing the Aegean Sea from Turkey to Greece because both Bulgaria and Greece have fenced their land border with Turkey.

3. Short-term responses cannot be a prerogative of single countries acting alone. In May, landlocked Serbia began preparing for large refugee arrivals transiting from Greece and Macedonia. Serbia’s EU neighbors and even Germany — all of which are among the refugees’ intended destinations — procrastinated until this past August. Newly installed barbed-wire fences between Hungary and its southern neighbors, Serbia and Croatia, soon proved futile. They contributed to additional suffering for vulnerable families who had survived many stages of peril, including at sea.

4. Alan Kurdi was not the last child to die. Last September, global observers shed tears for little Alan Kurdi, lying still on the Turkish beach of Bodrum on the Aegean Sea. One quarter of all maritime arrivals in Italy and Greece are children. In October alone, 90 minors died in the Aegean. Among them, 20 were younger than two years of age.

5. This is the deadliest year on record. Again. During the first 11 months of 2015, at least 3,515 persons died or went missing in the Mediterranean Sea, making this “the deadliest year on record.” Observers deployed the exact same phrase in 2011, and then again in 2014. I am forcing myself, in sharing these harrowing statistics without the context of my larger work. For they are unspeakable — unless we are willing to imagine 30,000 faces and 30,000 histories: Thirty thousand refugees have died or gone missing in the Mediterranean Sea since the year 2000. Most of their families mourn with neither a phone call nor a grave.

6. Pope Francis’ challenge: Pope Francis’ first journey after election was, quite tellingly, to Lampedusa. Throwing flowers into the sea, he bitterly criticized “the cruelty" of our own hearts, and of all those who . . . make social and economic decisions which open the door to tragic situations like this.” He thanked Lampedusa’s residents for their exemplary love and charity, but also spoke of the “anesthesia of the heart” and of the “globalization of indifference” robbing us even of “the ability to weep.”

More recently, Pope Francis called on each parish, convent and monastery in Europe to shelter refugee families. Refugees embody the portion of humanity with no access to “a roof, a job, and a piece of land,” as he put it in his address to the United Nations General Assembly in September. As war, violence, drug trafficking and environmental exploitation force people out of their homes, and as some governments fail to take responsibility for their own citizens, the pope has called for an equally shared global responsibility for refugees.

7. Calling the situation a “crisis” implies our obligation to think and act. The use of words such as “flood,” “flow,” “wave,” “influx” and “invasion” is neither accurate nor neutral when referring to refugees, especially in North America. The United States proactively takes an average of 70,000 refugees from around the world each year, following stringent vetting by the U.N. Refugee Agency and by a host of federal intelligence, security and law enforcement agencies. By contrast, there are currently 2.1 million Syrian refugees in Iraq, Jordan, Lebanon, and Egypt; and at least 1.9 million Syrian refugees in Turkey.

In Europe, refugees arrive essentially through unauthorized channels. Their surging numbers correlate with heightened violence and injustice in their home countries and, particularly in the case of Syria’s refugees, with dwindling international aid. There is nothing unexpected about them, and their numbers consist of individual persons with names and faces.

A flood is a disruptive tragedy. Do refugees pose such a disruptive threat to the fabric of liberal democracies? And is the ongoing crisis fostering a critical reassessment of the refugee and immigration legal framework? Are citizens helping out newcomers, and policymakers working on innovative provisions? If not, we have no excuse for using the word “crisis,” either.

8. Refugees won’t simply disappear. More than 900,000 people have already arrived in Greece and Italy by sea in 2015. The vast majority are presumed to need international protection, and thus cannot be repatriated. At least 800,000 people have lodged asylum applications in Germany alone. Can European countries and other leading liberal democracies, act in more rational, cost-effective and proactive ways, and allow for a more orderly welcome, a more dignified treatment, and a more thorough effort at identifying people? Can they share intelligence, implement family reunifications, study visas, and temporary protection, and boost the staff of asylum adjudication and resettlement committees? Can they, or should they, plan for realistic labor immigration quotas that reflect the needs of Europe’s aging societies, without undermining existing worker rights?

This, right here, would be my place to offer final remarks. I leave it blank, for you, because contention and conclusions rest collectively in our hands now.

Maurizio Albahari is an assistant professor of anthropology at Notre Dame, and the author of Crimes of Peace: Mediterranean Migrations at the World’s Deadliest Border (University of Pennsylvania Press, 2015). His essays have appeared in Anthropology Now, the Orlando Sentinel, CNN, History News Network and Fox News.