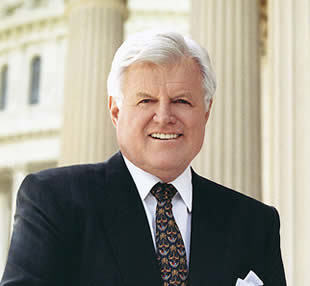 As best I can remember, it was a fine crisp day in October 1970. (I’m sure of the year, though not the date.) The day had started early at the Charles River Square townhouse, which was then the Boston home of U.S. Sen. Edward M. Kennedy. I was a Washington correspondent for The Boston Globe. This was just a few months after his disastrous behavior at Chappaquiddick. Kennedy was campaigning not only for his own re-election, which, despite the scandal of the previous summer, was expected, but also for a young man named Gerry Studds, running for Congress in the southeastern part of the state.

All day long Kennedy and Studds made joint appearances before welcoming though smallish crowds around New Bedford. Frankly, it had all been a bit dull. I kept my ears open for any comments about Chappaquiddick but heard none.

Toward dinner time, Kennedy left Studds behind (he would win his Congressional race in November) and visited the home of a long-time supporter in the fishing hub of New Bedford. He was able to ease his aching back (from a 1964 plane crash) in a bathtub, and we all enjoyed some delicious Portuguese food. Then it was on to the last appearance: what today would be called a “town meeting,” at a school in West Bridgewater.

That’s when things got interesting.

Kennedy’s opponent that year was a Republican named Josiah “Si” Spaulding, a young and relatively inexperienced politician. Just what Kennedy had been when he was first elected in 1964. Because Spaulding was relatively unknown, Kennedy had dodged his calls for public debates. But Spaulding had somehow learned Kennedy’s schedule for that day, and he showed up that night at the school. He asked for time to address the crowd, and Kennedy had to oblige rather than appear cowardly in front to the crowd of about 200 people.

I don’t have precise recall, but Spaulding must have raised the issue of abortion, which was not a hot-button topic in those pre-Roe v. Wade days. Spaulding was what today would be called “pro-choice,” and Kennedy, at that time, was passionately opposed to abortion. So when the subject came up, the senator was in full voice. He screamed, “Don’t tell me there isn’t enough love in the world to care for all the unwanted babies.” He mentioned that adoption agencies had waiting lists.

Although I had covered Kennedy closely for several years before that date, I had never heard his comment on abortion. I also had never heard him speak at such full volume. Although I interacted with the senator from time to time in future years, when I was an editor at the Globe and elsewhere, I never heard him take that position again. Within a few years, Roe v. Wade had been decided, and, like many other liberals, Kennedy became “pro-choice.” Kennedy defeated Spaulding in November with more than 62 percent of the vote.

Considering his thoughtfulness about his Catholic faith, as reflected in the letter he wrote to Pope Benedict XVI, which was read at his graveside, Kennedy must have grappled with the issue of abortion more than once. Though he never revealed his personal thoughts, so far as I know, I am left believing he was a holder of the Cuomo position — much criticized by anti-abortion activists — that he was personally opposed to abortion but supported the public policy, as established by the Supreme Court of the United States. Possibly his memoir, True Compass, to be published later this month, will give us greater insight into this thinking. Publicly he never wavered after changing his position, but the passion he demonstrated that night in 1970 remains firmly in my memory.