7:30 a.m. is way too early to be answering the phone on a Sunday morning. I hear my sister’s voice on the other end of the line: “Mom has something to tell you.”

Now I’m wide awake, with just enough time to think of every horrible possibility except what Mom says next.

I’m on the floor, because standing isn’t an option right now. Mom is still talking, but I can’t listen. I’m too busy trying to form words. It seems really important to tell her that John’s car was impounded last night. I know; I talked to him less than 10 hours ago. I still have the texts on my phone he later sent.

I say “I love you” and hang up the phone, acutely aware of my own breathing. My thoughts are oddly action-focused: I have to get home. It’s a nine-hour drive from Nashville, so I should probably get some more sleep before I get back in the car. Okay.

It only takes about 15 minutes in bed for me to realize I’m not going to get back to sleep. I’ll figure out something else. My brother is dead. 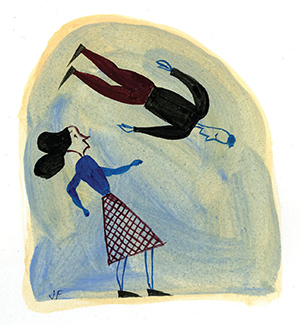 I get online to search flights back to Ohio. I have some Christmas money that will cover a one-way flight. I don’t know how long I’ll stay, so I don’t plan for a trip back. The airline website doesn’t work, so I have to call the hotline. The man on the phone is very nice. I wonder if they get sensitivity training for people booking last-minute flights.

Now I have three hours before I have to leave for the airport. I call my friend Oscar, even though it’s only 7 a.m. where he is.

“Tell me it’s going to be OK,” I whisper, before even saying hello, because that’s all I want right now.

“It’s going to be OK,” he says, without hesitation.

I got what I needed. I hang up and let Oscar go back to sleep.

I repack my bags, still open on the floor from my trip home for Christmas. Have you ever noticed how many people at the airport tell you to have a nice day? It’s a lot. I hope I’m responding civilly. I’m not really sure.

I have a layover in Detroit. I buy coffee, purely out of a sense of obligation, and I call another friend, Jennie. I ask her to tell people. I don’t want to bother telling anyone else, but I know that dozens of extra prayers can’t hurt at this point, and Jennie knows plenty of people who are really good at praying. It seems like an efficient plan.

At my parent’s house, three of my mom’s five siblings and their families, four of my eight siblings and their families, and a few neighbors and friends crowd the kitchen and living room, because that’s apparently what you do when someone dies. I make my way through the crowd, hugging lots of people and trying to come up with an honest answer when they ask how I am. How am I supposed to know how I am? My brother’s never died before. I settle for telling them I’m in denial.

As usual, I am the last one to go to bed. Somehow, in a house full of people, I end up with a room to myself. Alone, I cry harder than I have all day, mentally screaming at my idiot of a brother. His responses are so clear, it’s as if he’s sitting on the bed with me.

The next day, I start receiving phone calls. Each time, I am humbled and grateful for people taking the time to offer their condolences. Most of the conversations are short; no one knows what to say, myself included.

Then one more friend calls, direct from the Holy Cross seminary at Notre Dame. For the first time, I want to continue the conversation beyond just thanking him for his thoughts.

“Tell me he’s in heaven,” I beg, because if a seminarian says it, it must be true.

His response is beautiful and compassionate, and I share his words with family countless times over the next few days: “God reaches out to all of us in our darkest times. Sometimes he doesn’t catch us until we’re on the other side of this life.”

On New Year’s Day, two of my friends from Cleveland drive down to take me to lunch. I’m still not hungry, but watching bowl games seems like a reasonable distraction technique, only I want to hear something else first.

“Tell me he’s in heaven,” I ask again, more calmly this time, because Pat is a theology doctoral student, and if a theologian says it, it must be true. Pat’s response is logical and educated, with facts, history and quotes. I am now armed with assurance that neither God nor the Catholic Church is sending my brother to hell for killing himself, in case anyone tries to tell me otherwise.

That night in my room, John’s voice isn’t as clear as before. For some reason, this is nearly as wrenching as the initial phone call. “Don’t go!” I sob. “Please don’t go. Your voice is all that’s left. Please let me keep it.”

The calling hours are on Thursday. We decide to hold them at the high school to accommodate the expected crowd. My family arrives an hour early. I can see the coffin through the glass doors. Not yet. Instead, I help set up the displays and pictures.

I walk in the chapel and force myself to look at my baby brother’s body. Every muscle in my body tenses against this unnatural sight. My 21-year-old brother is dead and his body is lying in a coffin in front of me and WHY IS NO ONE HUGGING ME?!?!?

I try to moderate my tears as Mom comes over. The second-worst moment of my life passes, and I tell her that his makeup looks funny. I can’t imagine there are many ways to make a dead 21-year-old look good, anyway. In my mind, God tells me that John doesn’t need his body any more. John tells me he’s even better looking in heaven. I’m inclined to stick my tongue out at both of them.

The babies are running around before the crowds arrive. Mom asks my niece Susie if she’s said goodbye to Uncle John yet. Susie nods and, in her perfect, little 3-year-old voice, repeats what her wonderful parents told her: “Him’s gone to a place to be with baby Jesus!” It’s the most beautiful and horrible sentence I’ve ever heard. On the chairs along the walls, 18-month-old Sydney gleefully points to the picture on the prayer cards, then to the coffin. She’s proud that she recognizes Uncle John, even though she won’t remember him.

The calling hours are scheduled from 4 to 7; they last until 9:30. Friends, co-workers and distant relatives all wait for hours in line. Someone comments, “It’s like he’s a rock star.” John’s classmates from elementary school hug me, and I nearly break down at seeing these boys’ devastation. In my mind, they’re still 6 years old, throwing water balloons in our yard.

The church is full for the funeral. The procession arrives just in time to hear my sisters singing “Fire and Rain,” John’s dreadfully appropriate favorite song. I’m holding the words to the eulogy in my hand, because I have to give a eulogy for my little brother. My stepbrother and cousins are the pallbearers; none is older than 25.

John’s friends take up the gifts, their sobs incongruous against their bearded faces. I barely know most of them, but they are in as much pain as I am.

It’s after Communion, and my sisters are singing “I Can Only Imagine.” I sing along, possibly out of key and definitely too loud, because I have to stand up and speak in a few minutes, and if I can sing the song maybe I’ll be able to make it through the eulogy. He’s in heaven. He’s in heaven. That’s all I have to hold on to right now.

Father Dyer introduces me, and I start talking, giving less of a eulogy than a collection of stories. John made for a lot of great stories. I talk for more than the suggested five minutes, but no one seems to mind. I try to end with something conclusive:

“John could be a lot of things. But he is and always will be a son, a grandson, a cousin, a nephew, an uncle, a friend, a brother and a rock star.” And now, he’s in heaven.

This article was one of four second-place winners in this magazine’s 2013 Young Alumni Essay Contest. Carolyn Shivers earned a doctorate in developmental psychology from Vanderbilt University in 2013. She works as a research associate at Trinity College in Dublin, Ireland, for the DOCTRID International Research Institute, a consortium for advances in the field of intellectual and developmental disabilities.