As summer travel plans go, you could hardly beat the itinerary laid out before the Notre Dame Folk Choir this year. Just don’t call them tourists. 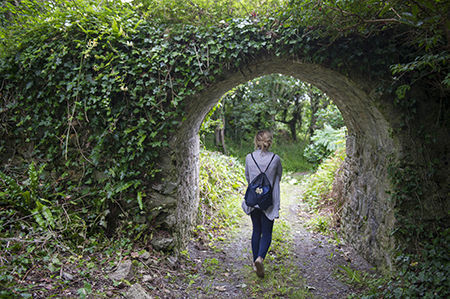 Wasting no time after the wrap-up of Commencement festivities on Sunday afternoon, the choir — several dozen students strong under the guidance of founding director Steve Warner ’80M.A. — landed in Edinburgh, Scotland’s historic and picturesque capital, early on Tuesday morning, May 17, where they are now singing — and staying — for a few days in the inner city.

Across the Irish Sea, the choir will soon visit Holy Family Church in Belfast, Northern Ireland, built on the site of a bombing that shook that city some 50 years ago at the start of the long, violent period of Protestant-Catholic conflict known as The Troubles.

Far to the south, they’ll sing at the National Opera House in Wexford, where for the past seven years a small, spiritual community of Folk Choir alumni known as the House of Brigid has led efforts to encourage singing in Irish parishes. The Catholic Diocese of Ferns, which includes Wexford, has created a diocesan choir that will debut there with the Folk Choir and will continue to grow after the Americans leave, says Warner, “just one more asset for the rebirthing of the faith” in Ireland.

The papal nuncio to Ireland, Archbishop Charles Brown ’81, who dropped in on a Folk Choir rehearsal during his ND campus visit in 2015, has invited the choir to sing at his residence and offices in Dublin. Another high-profile invitation, from former Irish president Mary McAleese, will take them back to Northern Ireland — to Rostrevor, which McAleese has long called her home. There, in June, they will kick off the four-day Rostrevor Choral Festival, “all the brain child of Mary McAleese and her friends in Rostrevor,” Warner says.

Warner promises to write up these adventures every day he’s able over at his blog, NDGuitarPilgrim, and here at the magazine we’ll be keeping an eye on their progress. But while Warner’s “Folkheads,” as the ND choir’s current and former members call themselves, may think of this trip as a “tour,” just as they have thought of their annual spring travels of the United States, the British Isles and Australia over the past few decades, Warner grimaces at the word.

He says a friend made the distinction for him years ago when Warner and his wife visited Rome during a long European holiday: Tourists demand; pilgrims are grateful. “ Gratitude became the compass point of the rest of our travels and the lens through which we revisited our experiences,” he writes.