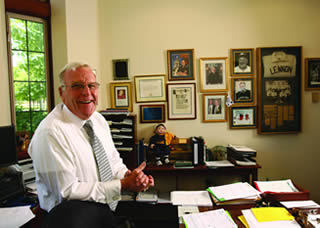 It was an early March day in 1999, and my wife, Annette, and I had just moved into a visiting-faculty house near campus after a major fire evicted us from our home. A knock came at the door. I opened it to find Chuck Lennon ’61, ’62M.A., laden with bedding, blankets and new ND-monogrammed outerwear. “I thought you might need these,” he said.

Even today, when I put on a worn Adidas windbreaker and think of Chuck, I get a little moist in the eyes. And I wonder whether I ought to tell him the zipper still sticks.

The man who lingers softly in my memory will retire this June after 30 years as executive director of the Notre Dame Alumni Association. In his half-century association with the University, he has been a student-athlete, graduate student, Main Building and athletic department administrator, coach, faculty member, club volunteer and, especially, quintessential Notre Dame ambassador. He will depart with virtually every honor the University can bestow, capped by an honorary degree in May.

Chuck Lennon always had your back. Ask former Notre Dame executive and heart bypass survivor Jim Frick ’51, one of about 100 persons to receive blood donated by Chuck over the years. Ask lifelong friend Paul Haley, who returned from work one day to find that his visitor from South Bend had spent the day rebuilding a broken picket fence in his Connecticut backyard. Ask Jim Gibbons ’53, forced by an illness early in his Notre Dame career to abandon coaching, which of his friends stepped in to mentor Irish baseball and basketball players. Ask classmates from Chuck’s Joliet, Illinois, parochial school who maintains the prayer list for the sick among them.

Chuck also never met a hand he didn’t want to shake. He never got “people fatigue” — witness the two generations of alumni lined up outside his office on football Fridays, not only for a trademark “Welcome home” greeting but also for one of his legendary hugs. They will marvel, as always, at how Chuck remembers names and graduation dates. Some will get his business card, on the back of which is a quote from Henry Ford that contains the key to Chuck Lennon: “You can do anything if you have enthusiasm.” That word, enthusiasm, appears more often than any in the 100 or so testimonial letters written for Chuck’s 25th anniversary in alumni affairs, missives signed by everyone from basketball star Ruth Riley ’01 to the president of the United States. The only word-count competitor is “commitment.”

Chuck Lennon came to Notre Dame from a Carmelite seminary as a second-semester freshman and received his B.A. in biology and education in 196l. He went on to earn a master’s degree in guidance and counseling and spent a few years in the Athletic Department and in research administration before leaving for 11 years in South Bend mental health, urban housing and redevelopment positions. These jobs honed his respect for racial, ethnic and gender diversity.

It was not an accident that Black, Hispanic, Asian Pacific and Native American alumni groups were formed during his Notre Dame tenure or that women and minorities steadily gained leadership responsibility in alumni affairs. His immersion in urban affairs, including several years on the South Bend Community School Corporation board, also gave him a deep appreciation for community service, another hallmark of the Lennon era.

He then spent three years in the insurance business in South Bend before returning to Notre Dame in 1981 to lead its alumni. The rest, as they say, is history. Lennon is now an associate vice president running the largest alumni association in the world, comprising about 132,000 living graduates, 214 Notre Dame Clubs inside the United States and 62 international. From a one-man operation under founder Jim Armstrong, the staff now includes 22 professionals, eight support persons and 36 student workers overseeing 74 programs from headquarters in the Eck Center.

Lennon believes in management-by-walking-around. He moves through the alumni office, saying “Good morning” to each person. It isn’t a perfunctory greeting; he often adds a personal touch, such as asking how a sick child is doing. As one member of his staff put it, “He is interested in us individually. He realizes that he can get the best out of people if he really knows them, if he treats them with respect, and if he is interested in their lives, not just their output.”

Once, when someone complained that he could not get anything done because alumni kept interrupting his work, Chuck gently reminded him, “Alumni don’t interrupt our business. Alumni are our business.” There is a corollary Lennon adage: “You can’t afford to have a bad day. People will forget what you said; people will forget what you did. But people will never forget how you made them feel.”

Chuck is unafraid to ask questions of his staff, and he is not nervous when the role is reversed. When Mackenzie and Associates was asked to review the Alumni Association a few years ago with an eye toward setting a strategic vision, some felt threatened, as is normal when a consultant arrives and change is in the air. Lennon’s response was to commission a large sign for the Eck Center lobby. It read: “We want to be better today than we were yesterday, and we want to be better tomorrow than we are today.” Over the ensuing month, the sign drew numerous signatures from staff, alumni, parents and friends who visibly committed to a shared goal.

Innovation and collaboration describe how the Notre Dame Alumni Association became a leader in programming, from the Hesburgh Lecture Series to the pray.nd.edu website. A Lennon colleague put it this way, “Chuck is like a guy who wants to go into the restaurant business serving exotic food, like bear meat. He recruits a partner and sets him up in a cabin in the woods with table, knives, saws — everything needed to skin a bear. He then disappears into the woods, returning a short time later yelling for the butcher to open the door. When he does, Chuck rushes in, chased by a grizzly. As he darts out the back door, Chuck shouts, ‘Clean this one while I get another!’” Collaboration, yes, but Chuck never let forming a committee stand in the way of getting something done.

You can put energy next to enthusiasm when describing Lennon, who as recently as last January walked home — at age 72 — from a campus basketball game through 30 inches of snow. It took him 50 minutes, traveling mainly on cleared streets. I always called him the “Energizer Bunny,” and you only had to see him emcee a pep rally to understand “shock and awe” at the level of athletic fans. As a two-monogram outfielder under the venerable Coach Jake Kline, Chuck often beat infielders to the dugout after a third out.

He remains a firm believer in the importance of athletics to character, both of the institution and the athlete. When he talks with prospective student-athletes, he winds up by stating, “If you want to be good as a person, if you want to be good as a student-athlete, go someplace else. If you want to be great, come to Notre Dame.” His close association with athletics gave him credibility when he would occasionally remind football-neuralgic alumni that graduation rates are as important as win-loss records and that there are 26 varsity teams, not just one.

Another legacy from athletics is a competitive spirit. “Forget Pete Rose,” advised Joe Kernan ’68, a former governor of Indiana and former mayor of South Bend. “The original ‘Charlie Hustle’ was Chuck Lennon. When he coached me on the Irish freshman baseball team, he only operated at one speed — full speed — and that has never changed.”

Another friend recalls a softball game between the offices of alumni relations and development. “We fundraisers never had a chance. Chuck was the oldest guy on the field, as well as one with a broken finger and bad knees. He approached the game just like he did every day in the alumni office, with great enthusiasm, positive reinforcement, creativity and aggressiveness. He never knew any other way.”

When alumni board winter meetings coincided with campus Late-Night Olympics, Chuck would put together a team of board members and himself to play against students in basketball and volleyball.

Chuck’s competitiveness affected others, sometimes in unintended ways. Lou Nanni ’84, ’88M.A., vice president for University Relations and Lennon’s boss, recalls jamming a finger in a South Bend City League championship basketball game some years ago. “I approached Chuck, our player-coach, during a timeout. He seemed to know first-aid, as well as everything else, and I asked him to get my finger back in place. He confidently yanked hard, causing a great deal of pain, and sent me back in. After the game, I went to the ER to have the finger checked out. They told me it was broken in three places and would require surgery.”

Chuck’s competitive streak seemingly extended to merchandising, a perception nurtured in days gone by when the campus bookstore did not extend its commerce to away football games (except for Southern California). To fill this commercial vacuum, Chuck would mount a logistics effort that moved an impressive amount of fleece, T-shirts and caps to bowl sites around the country where Notre Dame followers were waiting with cash and plastic. The resultant income stream supported alumni programming. The bookstore eventually bought out Chuck’s inventory and started to sell such clothing itself.

The film Rudy was ready-made for Lennon marketing. I never heard a happier Chuck than the day I called from the West Coast telling him that Tri-Star Picutres had agreed to a special alumni DVD of the film, this after earlier allowing Notre Dame clubs to preview the movie in special showings. Soon a mannequin of Rudy, wearing his No. 45 jersey from the film, appeared outside Chuck’s Main Building office. Father Bill Beauchamp could be seen wincing every time he passed the display, but the then-executive vice president helped promote the DVD, and 14,000 were sold.

Chuck seldom missed a marketing opportunity. I once gave him for safe-keeping a coffee can filled with tiny flakes of paint scraped from the Golden Dome in a restoration. Next I knew, they had been melted down, diluted and stamped into Alumni Association medallions given to graduating students. I managed to cage a few and have parceled them out to deserving Notre Dame lovers over the years.

I am now a decade into retirement, but a note from Dick Nussbaum ’74, ’77J.D., former president of the alumni association and a neighbor of the Lennons, reassures me that nothing has changed in the Sunnymede neighborhood of South Bend in which my wife and I once lived. Chuck still walks his dog, “Irish,” a leash in one hand while the other grasps the hand of his wife, Joan, his “best friend.” I would like to end with that picture, but my mind keeps returning to a scene 12 years ago. Chuck is standing on our temporary doorstep and asking, “Is there anything else I can do to help?”