If only those shadowy monsters hiding in the closet or under the bed or outside the window — a wide-eyed toddler can attest that you never know where they might be lurking — were the only threats kids face. Parents know better.

As do recent grandparents Jean Derbes Ratté ’74 and Geoffrey Ratté ’75. While they know they can’t vanquish the world’s very real dangers, the Rattés are doing what they can to enlist today’s children in safe, wholesome activities. 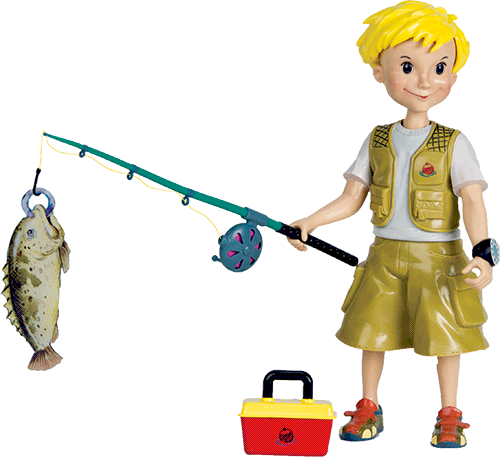 “We really wanted to create a world,” Jean says, “from a time when things were not as scary for kids. . . . [when] they could go outside by themselves. It’s that world where it’s always summer.”

That world created by the Rattés and their business partners, niece Megan Derbes McCarthy ’96 and Doug Ferron, is called FishingKids, and it comes with a line of books, toys, apparel and outdoor gear for boys and girls.

The business was launched in January 2012 when its website, FishingKids.com, went live. The first of its chapter books, The Monster of White Bear Lake, does tackle something the 10-year-old main characters Spinner (Steve Pinner) and his buddy Bobber (Bobby Ernest) find a little scary,

a creature Bobber describes as “a super crazy fish missile with giant teeth and a rocket tail” which might be responsible for some missing ducklings. As the pals plot ways of capturing the “monster,” they enlist Spinner’s grandfather, known as The Chief, in their quest.

“They’re fun little stories,” says Geoffrey, “the friendship of two boys, adventures they have. . . . It’s about getting along; it’s about stewardship.”

Written by Mike Holliday, a photographer, writer and fishing guide based in Stuart, Florida, the chapter books — The Mystery of Porpoise Point and The Pirate of Creole Bay are also available — sneak

in education, too. Throughout their playful escapades, Spinner and Bobber learn about fishing skills, safety and sportsmanship. Spinner fills a notebook with pictures of and facts about fish, and other “cool fishing stuff” he learns. Yet another Notre Dame graduate, Marilyn Emma Bellis Anderson ’95, creates the artwork for Spinner’s notebook.

The boys also learn about geography as they travel to different states on vacations, meeting a new fishing kid in each place and exploring different terrain.

“These are real places, destinations that [kids] can go to in real life,” says Jean. The first book is set in Minnesota, where the Rattés live. For the second, the boys travel in an RV with the Chief and Spinner’s Uncle Pete to the Florida Keys. The third adventure finds them camping in the Louisiana marshes. “My mom grew up in Louisiana,” Spinner tells Bobber. Perhaps not coincidentally, Jean grew up in New Orleans and the Rattés raised their three children there.

The idea for FishingKids resulted from the confluence of Geoff’s background in the fishing industry and Jean’s marketing sensibilities. “My husband was in the fishing tackle industry for about 40 years,” says Jean, “making fishing sinkers here in White Bear Lake in Minnesota.” In his role on the board of the Sport Fishing Association, she says, “Geoff did a lot of outreach to get kids interested in fishing, camping.”

Nothing seemed to work, she says, so the couple decided to attempt that same outreach through a private company they would create.

For those who may have missed the juggernaut, American Girl, a subsidiary of Mattel, introduced a line of historical dolls in 1986. Along with the 18-inch dolls came

books detailing the characters’ “lives” and, of course, clothing and accessories. Since then, the company has launched a magazine, other versions of its trademark dolls and, beginning in 1998, branded retail stories. The vision of its founder was to “bring history alive” through the dolls and books.

As part of what Jean calls the “amazing” way FishingKids came together with the help and advice from family and Geoff’s business colleagues, they learned that John Sherry ’74, a Notre Dame professor of marketing, and five colleagues had recently researched the American Girl brand.

“Backed by a rich web of innovative and successful retail stores, lines of books and clothing, a series of how-to-live books, and more, the American Girl brand is simultaneously a toy, a library of texts, and a set of values,” the research team wrote in the article “Why Are Themed Brandstores So Powerful? Retail Brand Ideology at American Girl Place.”

Geoff made it a point to meet with Sherry, to learn more about the business plan of American Girl. While none of the FishingKids founders foresees their company earning the mega-millions made by American Girl, they do see how the values of friendship, family and love of the outdoors, combined with a nostalgic vision of kids fishing with parents and grandparents, could strike a chord in families who enjoy outdoor activities.

“Most of our customers right now are grandparents buying for their grandkids,” says Jean.

That FishingKids customer base might have a lot in common with Geoff, who has a clear vision of what retirement should encompass. “We don’t want to work too hard,” he says, “but we want to go fishing.” And he wants to bring the kids along, too.