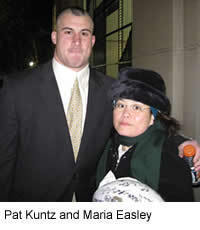 My wife, Maria, and I were on a mission. We had been assigned by the Notre Dame Alumni Club of Eastern North Carolina to get autographs from members of the 2008 Irish Football team on an ND football. The ball was to be presented to Eric “Rookie” Ruch (’00MBA) as a token of appreciation for his organizational efforts of the 2008 ND at UNC events.

Before the last home game of the 2008 season at Notre Dame Stadium, my son Mark Jr. (class of 2012, Keenan Hall) procured an appropriate football from the bookstore, and I inquired as to where we could get autographs. I was informed that the players would emerge from the gate at the north tunnel about an hour after the game. Little did we know that this would involve a fierce competition, which has come to be known as “The Autograph Bowl”.

After the game, Maria and I went over to the tunnel gate, and lo and behold, there was a mob of dozens of mostly 12- to 17-year-old fans waiting to pounce with their footballs, helmets, programs and Sharpies all poised and at the ready. I realized immediately that I was just too big and slow to play this game. So I did what any good QB would do, I called an audible:

I handed the ball (and the Sharpie) off to my wife, Maria. She plunged into the line full speed. She is short but strong, and a perfect fit for the autograph line of scrimmage. The crowd held its breath, and then, after 30 seconds, she burst out of the pileup, freshly autographed football in hand. The crowd went wild!

Spotting another player opportunity, I quickly called her number again:

Again she plunged in. Success! And then again! Time after time, she exploded into the line like a crazed leprechaun, each time scoring another autograph.

Her final challenge was the biggest of all. The last player to emerge, with just seconds to go, was famed Notre Dame senior defensive end Pat Kuntz. The crowd around him was huge, with ND fans of all sizes mobbing him for an autograph. In the huddle I looked at Maria, “Can you do it?” I asked. “Give me that ball,” she said, “I’ll win one for the Rookie.”

She plunged in again. Kuntz saw her coming, made some moves, but was finally forced into autograph position. As he signed the ball with a flourish, he told Maria “You’re good. I am proud to name you as the 2008 Autograph Bowl MVP!”

So now we award this football signed by 20 players of the 2008 Irish football team to Rookie and thank him for all his efforts this year.