Notre Dame Magazine started doing posters more than 15 years ago. We thought it would be nice to offer a gift in return to those who contributed to the publication that depends so heavily upon the kindness of readers.

It’s worked out very well. We’ve done about a dozen posters and thousands are hanging in homes and offices across the country. In fact, our business manager, Julie Ettl, sometimes jokes about being in the poster business. The posters have proven quite popular, and they generate resources that enable us to do a popular, top-quality magazine. 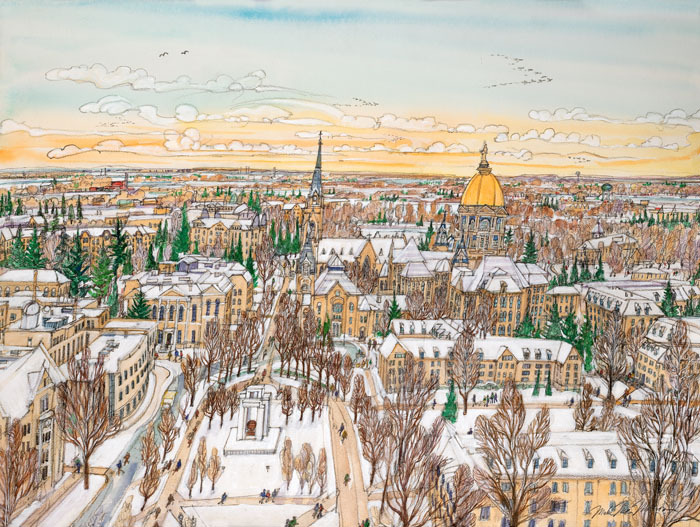 Mark McMahon is the Chicago artist we had chosen to do the artwork for our 2014 poster. His father, Franklin McMahon, who died in 2012, was an artist whose work had graced the magazine’s pages on numerous occasions. Kerry Prugh, the magazine’s art director, had been talking with Mark about doing the same.

“I’ll come next week,” Mark said one Thursday in the dead of winter — a week when temperatures hardly rose above single digits.

The McMahon style has long appealed to me — big, quick pencil sketches done on the spot, with an architect’s eye for precision and detail yet rendered with spontaneity and movement, impressionistic cityscapes with fluidity and skillful interpretation.

The pencil sketches get their watercolor hues and tints later.

McMahon came to campus and found some spots and did some sketches in the cold and snow. We arranged for him to see campus from the top of the library — where it proved difficult to peer over the top floor’s exterior walls.

So Melanie led McMahon to the window and let the artist sketch there for a couple of hours.

The drawing — an encompassing view of the central campus in winter — was fun and lively, tidily orchestrated and geometrically crafted. McMahon took it back home to Chicago and did the watercolor painting a few days later.

It’s shown here, and it’s available to those who donate $52 or more to Notre Dame Magazine. The print is 18 inches by 24 inches and fits standard-sized frames. You can make those arrangements here.

Offering posters as a premium to our donors is obviously intended to increase the revenues we need annually to maintain the magazine’s quality. But it is also a way to thank our readers and to return the favor, to give something back that also speaks of Notre Dame — something they cannot get anywhere else.

And it’s fun for us to produce these posters each year, hoping each time to come up with something our readers really like. We’re confident we did it again this year.