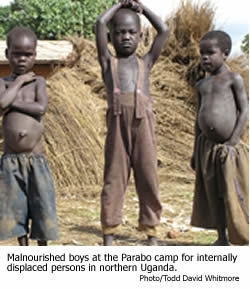 In the northern part of Uganda a violent conflict has raged for 19 years that few Americans have heard of and many will find unimaginable.

On one side are the government forces of President Yoweri Museveni, who is credited with stabilizing the country and fostering democracy after his National Resistance Army wrested power from a brutal dictator in 1986.

On the other side is the Lord’s Resistance Army (LRA), led by a self-proclaimed mystic, Joseph Kony. He claims to be on a mission from the Holy Spirit to build a new society based on the Ten Commandments. Instead of raising a conventional army, Kony has relied on abducting children and giving them the choice of killing for him or being beaten or killed themselves. Many girls are raped. Those caught trying to escape have been subjected to torture, mutilation and execution.

In the area of heaviest fighting, fear of LRA attacks has forced more than a million people to move into camp areas patrolled by a small number of government troops.

While studying abroad in Uganda last spring, Notre Dame senior Pete Quaranto visited some of these areas and found multitudes of frightened, starving people. The displaced residents don’t have enough land inside the camp boundaries to grow food to feed themselves, and they dare not venture outside the boundaries. LRA forces have been known to cut off the leg of a person caught riding a bicycle on their leader’s self-declared sabbaths (Friday, Sunday and Tuesday).

In the camps Quaranto interviewed several children who had escaped from the LRA. A 9-year-old gave him this gruesome account of how the abducted are indoctrinated:

“They collect all the children together and make you beat someone to death. Once there were about seven who tried to escape, including two girls. The commander decided not to kill the girls. He picked one boy to be killed. He placed his head on a piece of wood. He told one of the girls to come and chop this boy to small pieces. She started trying to cut his head off but was not doing a good job. The other boys were told to help. When they had almost taken the head off, they had to chop the body into small pieces. Then they were told to play with the dead person’s head. The boys had to throw it in the air four times, and the girls three times. The girls were bare-chested. After that, they commanded the girls to smear blood of the dead boy on their chest. After that, they put the head of the boy in a central place, put clubs all over it covering the head, and informed us that anyone who tries to escape will have the same thing.”

Of the estimated 25,000 children abducted by the LRA the past 19 years, about 15,000 have escaped and are trying to readjust to life, aid agencies report. The rest are presumed to have been killed or are still held captive.

Quaranto and Mike Poffenberger, a 2005 Notre Dame graduate who studied in Uganda in the spring of 2004, have formed the Uganda Conflict Action Network (www.ugandacan.org) to raise awareness of the conflict and lobby governments and others to exert whatever influence they can to end the conflict. Many international humanitarian and missionary organizations are on the ground trying to help in northern Uganda, and the country’s religious leaders have tried repeatedly to mediate a truce, so far to no avail.

Todd David Whitmore, a Notre Dame theology professor specializing in Catholic social teaching, visited northern Uganda earlier this year under the auspices of Catholic Relief Services. He says rebel leader Kony has resisted a truce because of the likelihood that he will face prosecution for war crimes. He also says President Museveni has little to gain by a negotiated peace because it would make him look weak. Also, the war has served as a check against any political opposition from the North, a region dominated by the Acholi tribe of Milton Obote, the brutal dictator toppled by Museveni’s rebellion.

The reasons the LRA initially enjoyed some support in the North are complex. The Ugandan government troops committed human rights violations of their own in the region, including forced conscription. Some also carried out revenge attacks on Acholi because they blamed the Acholi for the atrocities committed by Obote. Finally, the Acholi have been reluctant to strike back hard against the LRA because many of the attackers are their own abducted children.