Just as an artist uses negative space to strengthen a composition, Jim Swintal ’79 considers the spaces between race cars to make sure drivers traveling upwards of 200 mph have delineated boundaries. 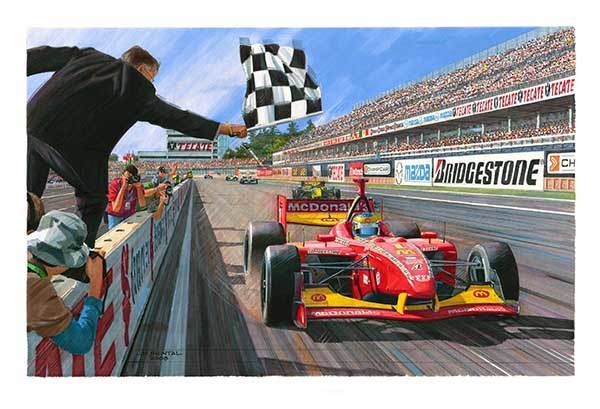 “I see the world a little differently than most people,” says Swintal, who works as the voice of race control with the IndyCar series, communicating with teams and pit officials during races across the country, including the Indianapolis 500. In the offseason, the Irvine, California, resident creates highly detailed, commissioned works of art depicting race cars during competitions.

In his mind’s eye, all is well if there is sufficient space between one car and another or between a car and the wall, for example. That spatial view of the world can be natural when it comes to architecture and art, but it is not always as intuitive when vehicles racing by.

“Let’s say there is an accident on turn one in Long Beach. I immediately tell teams at the exit on turn one there is an incident on the right. Go to the left,” says Swintal. “In the course of an event . . . part of my brain has to be set aside to react and the rest of it has to be dedicated to what I need to do.”

The path to IndyCar racing has been as circuitous as the racetracks where the 60-year-old officiates. Born and raised in South Bend, Indiana, Swintal says he knew from a young age he wanted to be an architect. But after eight years at one of the largest architectural firms in Chicago, Swintal realized architecture wasn’t his passion. It was racing that beckoned him.

Swintal had grown up listening to Sid Collins broadcast the Indianapolis 500 each Memorial Day. When he was 13, his dad had taken him to the Indianapolis Motor Speedway on the second day of qualifications. “It was wonderment for me. I could see, smell and feel the vibrations of the cars. I said to myself ‘I want more of this.’”

But it wasn’t until he started volunteering with CART (Championship Auto Racing Teams) in the 1980s that he realized how much more racing mattered to him than architecture. In 1990 he began a paying job with CART; in 2010 he became race control communicator for IndyCar.

Despite traveling 170 days last year, Swintal says racing just doesn’t get old for him. “I’m thankful I’m thriving at what makes me happy.” He even met his wife, Diane, a public relations coordinator and writer with the Mazda Road to Indy series, through racing.

JoAnne Jensen, chief observer for IndyCar, describes Swintal as a “student of the sport,” someone who is patient, upbeat and a good leader. Glenn Timmis, a track observer at the 500 for the past 47 years, is impressed by Swintal’s demeanor. “Jim is absolutely calm,” Timmis says of Swintal’s communications with teams. “It can get intense, but he knows what he’s doing.”

With a job as stressful as race control, it’s fitting that both Swintal and Jensen spend their offseason in solitude creating art. About three years ago, Swintal started painting commissioned works that begin with a black-and-white sketch and end up as a detailed painting of a race car, the track and the spectators. He also sells posters and lithographs to the public at jimswintal.com.

“I’m kind of a control freak. When I’m at the track, I’m always trying to make it a safe and fair race,” he says. “Notice that race control has the word ‘control’ in it, although we’re not in control really. When I sit at the drawing board, I am in 100 percent total control.”

Kathy Jonas is a freelance writer from South Bend and a former newspaper reporter and nonprofit executive director.