My love of the water began at an early age. In my baby book, my mom shares her account of my baptism, noting: “Gina did not cry as the water was poured over her head; in fact, she liked it!”

Growing up in northern California, I spend summer days splashing around the pool at the YMCA, stalking the teenage lifeguards who look impossibly cool in their red swimsuits. When I am 6 years old, my dad oversees the installation of an L-shaped pool in our backyard. It looks like something out of The Flintstones, all rounded edges and curves, complete with a banana-yellow slide that quickly becomes the main attraction for my brother, sister and me. During birthday parties, 20 or so kids cannonball into the deep end, then squeeze into the hot tub before retiring to the kitchen for pizza and cake.

After I join the swim team in fifth grade, jumping into the pool becomes an almost daily part of my routine. There are weekday practices and competitive meets on the weekends, which involve — besides swimming — a whole lot of waiting around. My teammates and I huddle in our sleeping bags between events, eating Twizzlers, playing the fortune-telling game M.A.S.H. and listening to our Discmans.

On October 17, 1989, when the Loma Prieta earthquake strikes the San Francisco Bay Area, I’m in the middle of swim practice. The lane lines twist and contort, and a great slosh of water practically catapults us all onto the deck. No one is hurt, and, oddly enough, no one seems to be alarmed. 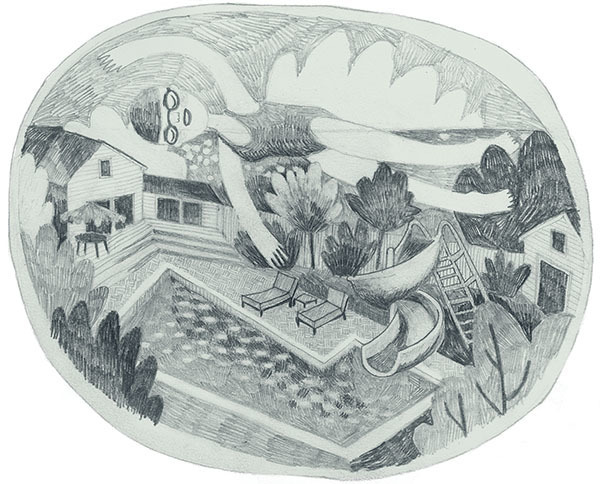 I discover some aspects of swimming that I don’t relish. Swimmer’s ear plagues me constantly, and I have to be scrupulous about using drops. One day, my mom takes me for a long overdue haircut. I feel distinctly offended when the stylist turns to my mother and says primly, “See that nice, glossy glow in her hair? That’s chlorine.”

There is also the embarrassing business of hair in other places. Our coaches instruct us to let all of our body hair grow out until the night before the meet, then shave it to reduce any drag in the water. I’m not sure if this makes anyone’s racing times faster, but it contributes to plenty of angst among the girls, who are convinced the entire school will notice and poke fun at the stubble on our legs.

Plenty of my teammates invest in paper swimsuits, which I am terrified to wear. Though the popular suits — which I later learn aren’t actually made of paper — are specifically designed for racing and claim to offer a performance edge, I can’t shake my nightmares of the suit suddenly disintegrating in the water on the final lap of an event.

Decades later, my time as a swimmer feels like an artifact of a different era. I’m now firmly entrenched in motherhood, with an opinionated toddler who rules my waking hours. Our days are an endless carousel of naps, diaper changes, reheated coffee and overflowing laundry baskets.

As we celebrate Halloween with our daughter, a subtle chill creeps into the autumn air, and we learn I’m expecting our second child. Life finally seems to be settling into a comfortable rhythm.

Then my immune system decides to turn on me.

While it’s not clear what provokes my body to destroy itself — the pregnancy, a random virus, or an ill-advised binge on Halloween candy — the damage is swift. My intestines take the brunt of the onslaught, which quickly batters my colon. By early December, I wind up in the hospital.

As snow falls outside the window, an ever-changing cast of gastroenterologists, surgeons and high-risk ob-gyns visits me, filling my charts with grim observations: “Inflammatory colonic Crohn’s disease. Persistent pain and fever. Treatment-refractory.” The doctors seem almost bewildered by the relentless progression of my symptoms. After I fail several rounds of medication, the poker-faced doctor who’s in charge says aloud what I’ve suspected for a while: I need surgery to remove most of my colon.

A team monitors my baby — a girl — throughout the procedure, which is a complete success. Surprising everyone, my daughter even hangs in there another week before being delivered early. She’s healthy but requires care in the neonatal intensive care unit for more than a month. By mid-April, we are both home.

There is something achingly beautiful about the return to ordinary life, in all of its drudgery, dirty dishes and sleep deprivation. For the next few years, I’m happily consumed by this transition out of crisis mode, reveling in the normalcy and stability that once seemed lost.

But when my younger daughter starts preschool, I’m jolted by the recognition that she’s no longer a tiny preemie. She’s growing up, a feat that once seemed impossible. And this compels me to pursue a milestone of my own: I sign up for a swimming class at the gym.

My surgical scars have long since healed, but I haven’t visited the pool in years. The idea of hitting the water again is both terrifying and thrilling. It feels like the ultimate test, an indisputable way to prove I am the same person I always was, that I am not broken.

I pull on my old swimsuit, stretched and wrinkled and a bit dusty after years of disuse. The water’s bracing cold greets me as I slog through the first few laps, my arms and legs resuming their long-lost rhythm — stroke-stroke-stroke-breathe. Gulps of air come in, stoking the fear in my chest that I might faint or sink to the bottom in a humiliating display of exertion.

But I don’t. And just like that, swimming becomes a regular part of my routine once again.

It’s fascinating to observe how much the body remembers. Though it’s been more than two decades since my last competitive swimming experience, I can still do all four official strokes — albeit slower than before. Butterfly remains my mortal enemy. And much to my dismay, my grown-up ears are still prone to getting water-logged.

I might be able to keep up with my younger self in an all-out effort, but there is one key difference between that girl and the present-day me. Now two miniature versions of me are out in the world, away from my watchful eyes for increasingly longer periods but always foremost in my thoughts. So before I hit the water, there’s always a digital handoff with my husband, a quick text: “Swimming now, back online in an hour.”

This hour is a rarity in my world. In this age of smart phones and constant connectivity, being “always on” is a reality for most parents. But when I’m in the water, I’m effectively unreachable. I can’t grasp for my phone, scour the latest news or get pulled into the abyss of social media.

While blocking out external distractions, the water also acts like a barrier between my body and the whirlwind of my thoughts, quieting a mind that typically buzzes with questions: When do I need to pick up the kids? Do we have enough snacks in the house? And when is someone going to fix that blasted doorbell? It’s like hitting the pause button, a brief but welcome reprieve for my mom brain.

Swimming cannot erase the hurts or scars of the past. It cannot transform me back to my younger, more carefree self. But it has created the quiet, undisturbed space necessary for me to reconnect with her, in a way that nothing else in my life has. And this is a gift.

Once my head dips beneath the pool’s surface, the sounds of the earth fall away, and my mind is focused only on the next breath, the force of the water against each kick, the number of strokes until I reach the wall. There’s a muffled stillness, a familiar gentle whirring, like the sound you get when you hold a seashell to your ear.

For just a moment, my eyes close, and the distant past comes alive.

Gina Rich lives in Mequon, Wisconsin, with her husband, Kevin Rich ’00, and their two daughters. She talks about motherhood in her blog lovehopeandcoffee.com.