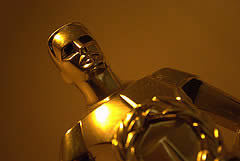 Of the 10 Academy Award nominees for Best Picture, two films offer the most compelling competitive storyline: Avatar and The Hurt Locker. This isn’t because they’re unquestionably superior to the rest of the nominees (though they did tie for the most total nominations with nine). Instead, their opposition crystallizes intensely held opinions about the state of the American film industry and the meaning bestowed by its most prestigious award. As with earlier heavyweight match-ups (Pulp Fiction vs. Forrest Gump, Saving Private Ryan vs. Shakespeare in Love), money, aesthetics, politics and personalities underpin this Oscar battle.

First and foremost, this is the Hollywood behemoth against the indie underdog. James Cameron’s science fiction eco-parable Avatar, in which a mining company in pursuit of profit destroys the wondrous habitat of the planet Pandora, embodies U.S. studio filmmaking at its most dominant, from the film’s massive budget (reportedly over $400 million) to its global reach (a record $1.9 billion in worldwide box office gross and counting).

The Academy likes to reward popular, epic blockbusters (Braveheart, Gladiator, Cameron’s own Titanic ), as if to affirm that Hollywood’s excesses are in the service of the audience, not the industry’s profit motive. That said, Oscar has rewarded modestly budgeted independent cinema frequently since the 1990s (American Beauty, Crash, Slumdog Millionaire). A win for the $11 million The Hurt Locker would signal that, despite the dire economic state of indie filmmaking today and The Hurt Locker’s mere $16 million box office take, the American film industry must support its best artistic work, regardless of its profit potential.

Indicative of its artistry, The Hurt Locker, an intense film about an Army bomb disposal unit in Iraq, has dominated the various film critic awards. Avatar’s special effects-driven spectacle is certainly revolutionary, but many critics find the film’s story to be highly derivative and shallow. In contrast, The Hurt Locker’s intimate scope and quiet narrative offer the chance to truly contemplate the ideas contained within the images. And while The Hurt Locker’s handheld aesthetic, guided by director Kathryn Bigelow, is not the step forward that Avatar’s fantastical 3-D and CGI effects are, the intensity of the experience prompted by that realistic style can be no less transformative for the spectator. Here the battle rages between rewarding either technological revolution or narrative integrity in filmic storytelling.

Politically speaking, both films offer messages that speak to Hollywood’s left-leaning constituency; in fact, they are actually united in highlighting the dehumanizing impact of militarism. However, Avatar’s overt moralizing contrasts with The Hurt Locker’s more subtle stance. The Academy has rewarded righteousness in the past (Schindler’s List, Dances With Wolves), but for those disdainful of Avatar’s bombast, The Hurt Locker is the ideal alternative for making a political statement with the Best Picture vote.

Finally, because this is Hollywood, one has to consider the gossip angle: directors Cameron and Bigelow used to be married. Cameron has a reputation as an egotistical despot, and, perhaps indicative of that, Bigelow is only one among four ex-wives. Bigelow is well-respected for being one of the few female directors to thrive in Hollywood (she’s only the fourth woman ever to receive a Best Director nomination). Thus, a vote for The Hurt Locker would be a call for greater female prominence in the director’s chair; at that same time, it would be a vote against the prospect of Cameron delivering another galling “king of the world” Oscar speech.

Of course, it’s possible that Inglorious Basterds or one of the other nominees will make this particular cage match moot. But at least until Oscar night on March 7, The Hurt Locker vs. Avatar will remain the most compelling, meaning-laden storyline of the Academy Awards.