Seventy years ago this fall, a college football dynasty began that stands as one of the best ever. Andy Panelli ’77, ’83MBA would consider the qualifier superfluous. To Panelli, the son of postwar fullback John “Pep” Panelli ’49, the 1946 and 1947 Notre Dame teams remain unmatched in the history of college football. 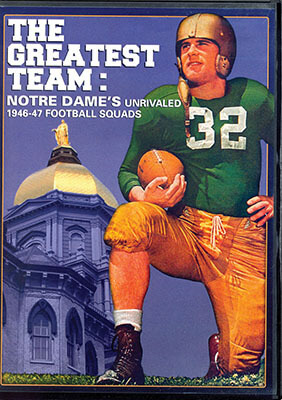 That’s not just a son talking. Sports Illustrated came to a similar conclusion in 1997, saying the designation “best ever” belonged to one of those two teams, each so dominant that the magazine couldn’t decide between them.

Many players were returning World War II veterans, giving coach Frank Leahy an overabundance of talent and physical maturity. So much so, in fact, that Leahy alternated the first and second strings each quarter in 1946. The de facto backups, playing in the second and fourth quarters, actually outperformed the starters, which reserve quarterback George Ratterman ’49 attributed in Sports Illustrated to the first team wearing down the opposition.

Leahy’s notoriously intense practices were probably harder on the players than the games. He pushed them to physical extremes to identify the best among so many excellent players. As Pep Panelli put it, “He worked us so incredibly hard, and if he didn’t see blood, you were loafing.”

The combination of talent, maturity and effort produced extraordinary results. Notre Dame went 17-0-1 over those two seasons — the famous 0-0 tie against Army the only mark against them — and won two national titles. Through those 18 games, Notre Dame never once fell behind, steamrolling opponents by an average score of 31-4.

Two more seasons would pass before Notre Dame lost a game, a span of 37 wins, two ties and three national championships. Even in that triumphant era of Fighting Irish football history, the first two years stand out, memorable as the work of one indistinguishable, incomparable team.

Jason Kelly ’95 is an associate editor of this magazine.