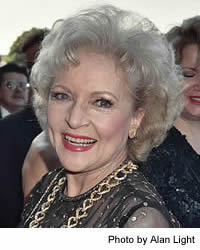 The most talked about popular culture figure right now isn’t a Twilight starlet, a teen pop sensation, or a reality TV publicity hound. Contrary to the obsessive focus on youth in contemporary media entertainment, the flavor of the month is an octogenarian: Betty White, who has emerged as the hippest grandmother a college student could imagine.

The Screen Actors Guild gave the 88-year-old legend a Life Achievement Award last month, but what has particularly stirred attention around White in the past few weeks is an achievement she hasn’t yet added to her filmography: host of NBC’s Saturday Night Live. Specifically, a 29-year-old fan recently launched a campaign via the social media networking site Facebook urging NBC to hire White to host an episode of the network’s long-running comedy sketch show, and over 400,000 Facebook users have signed on as fans of the idea. Unquestionably, this exaltation of Betty White is coming from younger generations, which raises the questions of why? And why now?

One of the foundational concepts behind stardom is authenticity; we connect with our favorite stars because we perceive them to be genuine in some way. Media-steeped youth are aware of how packaged and contrived stardom can be today and often respond positively to anything they perceive as operating outside of such calculated machinery. Thus, a fan-fostered movement surrounding a star whose age alone makes her unlikely to be part of a corporate marketing agenda is readily attractive.

White’s Facebook supporters also rightfully insist that she deserves to be featured by Saturday Night Live because she’s a genuinely talented, nimble comedienne who thrives in live settings. She has proven this on television over many, many decades and, for the YouTube generation, via countless online video clips, which particularly show her excelling at spontaneous humor, from game show retorts to awards show banter.

In that regard, White’s support can also be taken as a backlash against the perceived plunge in Saturday Night Live’s quality over the past decade and the transparently commercial hosts offered by the show as a matter of course, such as the selection of actress Megan Fox, not because she has any aptitude as a host or comedian but because she’s a headline-grabbing name with a blockbuster film to hawk. One can even see this movement dovetailing with the resentment generated by NBC’s Tonight Show debacle, which similarly saw youth culture and social media mobilize behind what was decried as the profit-driven mistreatment of Conan O’Brien.

As this indicates, the role of social media popularity waves must be considered too. It’s likely the majority of those who aligned with “Team Coco” on Facebook to rally behind O’Brien had rarely, if ever, watched his show (If they had, O’Brien might still have one). But joining a Facebook page or tweeting support takes little time and effort. With a mere mouse click, you can become part of the clever vanguard, and you can broadcast that perception to the rest of the online community. This is not to question the sincerity of the members of White’s Facebook fan page but to acknowledge how readily such social media trends can snowball.

In White’s case, we can’t discount the role of traditional media either. Generation Y grew up with Golden Girls reruns on television, and White’s bemused reactions to Facebook (“I’m such a technological spaz, I can’t…I don’t understand any of that stuff”) echo her Golden Girls character Rose’s befuddlement. Further, White still embodies the social taboo, and hence the hilarity, of seniors acting naughty, which helped to sustain Golden Girls for seven seasons. During her Screen Actors Guild acceptance speech, White bawdily commented, “I look out at this audience and I see so many famous faces. But what really boggles my mind is that I actually know many of you. And I’ve worked with quite a few. Maybe had a couple.” And during a recent appearance on Late Night With Jimmy Fallon, White played a spirited game of beer pong with the host. A college student couldn’t conceive a cooler grandmother.

That ability to stay relevant in popular culture generation after generation has enabled Betty White to appear on television in an astounding eight different decades. Whether she’ll add Saturday Night Light to her filmography remains to be seen, but even if that hope goes unfulfilled, she has to be the only actor who can point to both a 1949 TV show, Hollywood on Televison, and a 2010 Facebook campaign as markers of achievement.