When Daniel, our daughter Elaine’s boyfriend at the time, needed to store his Harley-Davidson motorcycle over the winter, he asked if we had any available space. Sure — just enough room in our one-car garage to accommodate a shiny chrome and turquoise Harley Sportster.

Daniel worked at the Saint Peter Claver Catholic Worker House in South Bend. That nonprofit served the homeless but was not known for its storage facilities for staff vehicles. Two days before Christmas, his father had died unexpectedly of a seizure at age 53. Daniel and Elaine had flown to Boise for the funeral but were returning to Indiana in a U-Haul truck packed with selected treasures from his father’s life — tools, Navy uniform, a model train collection. And a Harley. Traveling on I-80, their truck buffeted by high winds, they took a five-hour detour northward to Marshall, Minnesota, the drop-off spot for the Harley.

The looming question: How do you unload a heavy cycle from a U-Haul truck unequipped with a ramp? My husband, Jim, a creative problem-solver, had the solution. 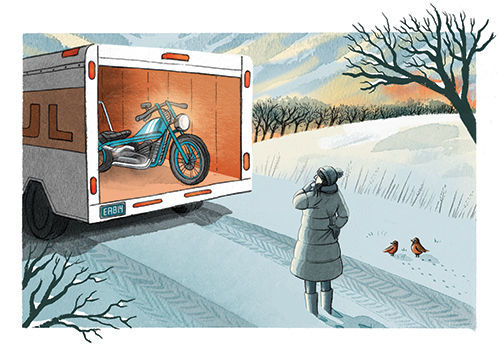 We’d drive seven blocks to Southwest Minnesota State University, where we both taught, back up to the loading dock by the mailroom and behind the theater, flip the hinged metal flap on the dock to create a bridge into the truck, roll the cycle onto the dock, rev it up and drive down the ramp. The college wasn’t in session over Christmas break, not many people were on campus and few deliveries were being made. The job would be a snap.

All went according to plan — until Daniel rolled the cycle onto the dock and tried to start it. Nothing. Nada. Zip. The sun beamed down from a cloudless blue sky over the prairie, but the temperature hovered just above zero, colder with the wind chill and probably much colder than the Sportster had ever experienced in Boise. One option: Daniel could walk the cycle to our home. But between dodging icy patches and dealing with the bitter cold, he’d be the lead actor in a cross between Survivor and The Great Race. We needed to come up with Plan B.

Then a door swung open onto the loading dock. Were we going to get busted for using state property unlawfully? There stood our friend Jan, who also taught at the college. She’s a seasoned Harley rider who makes an annual summer trek with her husband, Doug, to Sturgis, South Dakota, for the big rally. Her expression was incredulous.

“What are you guys doing?!”

We explained our predicament through chattering teeth, and Jan high-tailed it to the parking lot to get Doug, who was waiting for her in their pick-up truck. Doug tried pushing the bike down a sloping sidewalk in an attempt to jumpstart it but failed to achieve lift-off. The crank case oil was too viscous. Nothing was happening. Stumped, the six of us brainstormed.

“Why not take it inside and roll it into the Theatre Department shop, set up the hot lights to heat it up and thaw it out?” Jan suggested.

As chair of the department, Jan had the shop keys in her pocket. Once inside the deserted campus building, we spotted another friend and professor, Ray, who does set design. We shared our scheme, and he jumped on board.

In the Black Box Theatre, Ray arranged a bank of six spotlights on the Harley — now the star of the show. We all hoped for a quick thaw — and ignition. In the meantime, we gave Daniel an impromptu grand tour of the college — Student Center, sports facilities, courtyards, our offices, the Walt Whitman Room, the hangout for English majors, the works.

Two hours later, we returned, and Daniel rolled the bike into the hallway with all of us trailing him. When he turned the handle, we held our collective breath. But not for long. The cycle roared to life with that distinctive Harley-Davidson growl reverberating through the halls of academia. Daniel grinned boyishly, the same expression he and his father shared in a photo of the two of them he’d brought back from Boise. The maestro-like head of a music professor suddenly popped out from behind a closed office door, his eyebrows arched in wonder. A gray-bearded art professor strode onto the scene and began snapping pictures. A maintenance worker wearing a SMSU sweatshirt rounded the corner, surveyed us, smiled, shook his head. Other gawkers swelled the crowd. How often is a Harley revved to life in a college corridor?

Rolling the bike out into the parking lot, Daniel did a skittery dance on an icy patch. Once he got to the main campus road, he peeled off, slicing the frigid air.

We thanked Jan and Doug for going out of their way to help Daniel. Doug shrugged, said matter-of-factly, “Just following The Code.”

“The Biker Code,” Doug replied. “Always help another biker in need until you’ve exhausted all possibilities.”

Not a bad code to live by.

Jim and I have since renamed that stretch of the Fine Arts Building “The Harley Hallway.” Now, after work hours, when we switch to walking shoes and stride briskly side by side through SMSU’s interconnected buildings, passing through The Harley Hallway, we still hear echoes of Daniel’s shiny Sportster roaring back to life, the unlikely sound of resurrection.