Forgiveness can change the one who hurt you.

God has forgiven you (remember the unforgiving servant).

It makes you a craftsman of a better world, not forever an objectified victim.

Forgiveness derives power from being unexpected and undeserved and is therefore dramatic and startling.

Revenge, like a sneeze, feels good for a moment but leaves behind a mess.

— Daniel Philpott is a Notre Dame professor of political science and peace studies, and director of the Center for Civil and Human Rights.

Children (with gratitude for the hope, innocence, wonder and joy they bring to the world)

The universe (whose beauty, bounty and exquisite order can only inspire awe — when we pause long enough to notice)

Those occasional, heart-leaping, inspiring triumphs in sport (despite all the misguided, shameful, greedy, megalomaniac cancers that have corrupted the games we play)

The good guys still outnumber the bad guys (I think)

Human genius still loose in the world (showing up in science, art, medicine, technology and all the innovations, creations and organizations that do good)

Instantaneous, handheld global communication in every corner of the planet (that must surely someday lead toward an understanding of our common enterprise as fellow human beings)

Life as a mysterious adventure (whose secret meaning will ultimately be revealed, so that it will all make sense someday and maybe have a happy ending. One can only hope.)

— Kerry Temple is the editor of this magazine.

Google the Serenity Prayer, and take it all to heart.

Charity begins at home, and so does peace, one person at a time. Practice random acts of kindness.

Forgive others for their sake and for your own. Most people are doing the best they know how to do.

Try to understand others. Listen; don’t shout. We have two ears and one mouth.

We all have a center of stillness surrounded by silence. Give yourself a rest every day.

There is no peace without justice. Support the common good always and all ways.

10 Reasons It’s Better than You May Think

It’s easy to get overwhelmed with all the bad news. The world seems to be going to hell in a handbasket. Fox News recently reported, in fact, that 58 percent of registered U.S. voters think exactly this. (It’s certainly a curious expression, though. Why is it described as to hell in a handbasket?) Clearly enough, news from around the world, and particularly the poorest parts, can be discouraging — the global economy is in a horrible fix, and then there’s Ebola and ISIS, just to name a few. 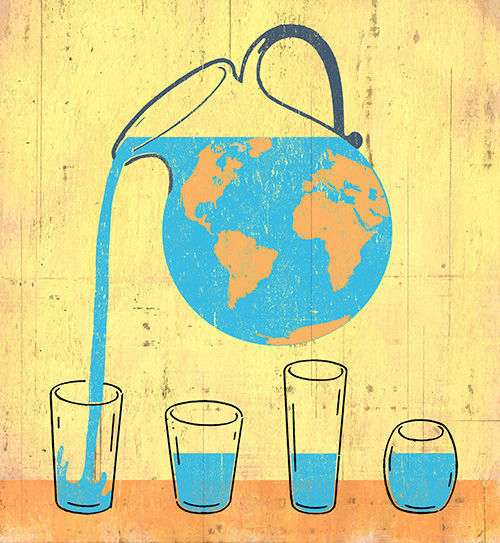 I teach a class at Notre Dame exploring “what works” in international development, particularly in the poorest countries in the world. My students recently wrote on examples of things that have gotten better, and they had to provide evidence. Using global development statistics from UNICEF, World Bank, World Health Organization and other sources, I share a few of their examples of why things may be better than you think.

• In the 20th century, the average life expectancy shot up 30 years — the greatest gain in human history.
• Global health conditions have improved more in the last 50 years than in all previous history.
• Dramatic declines in preventable child deaths with the global under-5 mortality rate nearly halved since 1990 — that’s 10,000 fewer children dying every day.
• Well-organized public health campaigns eliminated smallpox from the face of the earth, and polio has nearly been eliminated.
• On the poverty front: 200 years ago, 85 percent of the people in the world lived in poverty; today less than 20 percent do.
• Even in Africa, the world’s poorest region, more countries are turning toward strong sustained development, and seven of the 10 fastest-growing economies of the past half-decade are in Africa.
• On literacy: 150 years ago only 10 percent of the world’s population was literate, compared to approximately 80 percent today.
• Many nations that were once aid recipients are now self-sufficient.
• Increasingly those working on “international development” look beyond measuring just economic development to serious, rigorous work that pays attention to people’s “flourishing,” including their happiness and satisfaction.
• Global evidence suggests people who have a “significant purpose in life” are, in fact, happier. In turn, happy people tend to be healthier and live longer than those who are not.

The world’s problems are enormous and daunting — but evidence of all kinds shows we are making progress. Better news yet, a lot of recent empirical work supports what Ralph Waldo Emerson wrote some 150 years ago: “It is one of the most beautiful compensations of this life that no man can sincerely try to help another without helping himself.”

Treat everybody
else
the way
you want to be treated