I am sitting in my daughter’s bedroom at a table she has draped with a furry blanket covered in purple flowers. Trying to be a good role model, I’ve ordered broccoli from her play kitchen. She doesn’t have any broccoli, so instead she is preparing dessert.

As she is decorating slices of plastic cake with Velcro strawberries, she says, “We don’t have enough strawberries. Can you deal with it?”

Can I deal with it? Not enough strawberries? Yeah, this I can deal with. What I can’t deal with is the broccoli. 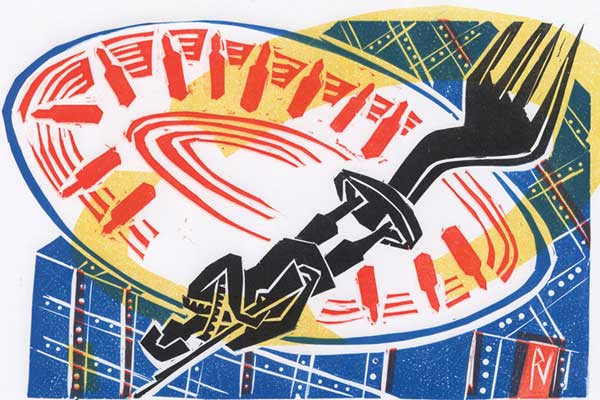 My son will only eat the bottoms not the tops; my older daughter will only eat the tops and not the bottoms, and only if it’s raw and slathered in ranch dressing. My youngest has now decided it doesn’t matter what I do to it — tops, bottoms, cooked, raw, ranch dressing, maple syrup, ketchup or cream cheese frosting — she won’t eat broccoli at all.

Last night at the dinner table she and my husband got into another broccoli battle, one of many in the ongoing broccoli war.

My husband at the head of the table, doling out expectations: “You eat your broccoli.”

My 5-year-old daughter, countering, “I’m not eating it.”

“You eat your broccoli.”

Then she brazenly got up from the table and flounced out of the kitchen. At this point our oldest child exclaimed in disbelief, “No way! You’re not going to let her get away with that are you?”

My husband, hesitant to admit defeat, “Well, I got her to eat the carrots.”

Until a screech was heard from the insolent child’s brother in the basement, “Gross! Mom, she just spit carrots all over me.” He bounded up the stairs and burst into the kitchen to show us the offending mound of orange spittle on his sleeve.

Another happy meal time, clearly illustrating, once again, that my husband and I don’t have the parenting skills to win at broccoli, or even carrots. And the meal where we claimed victory by forcing my son to eat four pieces of squash was enjoyed only until he barfed them up all over his dinner plate, a fait accompli he and his sisters still find hilarious.

I often feel defeated. How many times has my mother told me about my cousin’s children, who eat everything their mother puts in front of them? I’m tired of trying, preparing, cooking, caring. I can’t make them eat vegetables. So I decided to rethink my strategies and, in desperation, came up with another tactic: manipulation. I would play off sibling rivalry and my children’s ability to compete with each other over everything.

As my children sat down at the dinner table, I placed their plates in front of them. The plates were overloaded with broccoli, and I loudly asked, “Which one of you can eat the most broccoli?”

My children paused and looked at each other, looked at the broccoli on their plates and — before the girls could even say, “I couldn’t care less” — my son ate all the broccoli on his plate and my plate and was gobbling stems off every piece of broccoli he could find. A melee of boy and broccoli that left chomped broccoli bits strewn across the table and little drowned florets gasping for air as they bobbed in the ranch dressing.

My son stood up and did a victory dance around the table, a few air punches followed by a self-laudatory speech, “Yes, I am so awesome, I’m so awesome, I totally win.”

I conceded that this manipulative battle tactic would probably work best in a house with multiple boys. Since I have only one boy, our household produced only a 33 percent success rating. I then contemplated pureeing vegetables in a blender, mixing them with fat and sugar, and adding that into baked goods. I could borrow my aunt’s recipe and bake the broccoli into brownies, but I’m not sure that’s a deceit I want to try, since my childhood memories of my aunt’s brownies were my grandmother explicitly telling me not to eat them.

I also have bribed my children to eat vegetables, telling them they could have fries if they ate their broccoli. But that tactic only left me confused, because I don’t think the health benefits of a few bits of broccoli counter a plate of French fries. Then there is the classic vegetables-dessert threat: “Eat your vegetables or you won’t get dessert.” In our house that mostly just elicits, “What’s for dessert?”

I’ve got no good ideas on how to get these kids to eat broccoli. Maybe the broccoli hill isn’t a hill worth dying on, perhaps there are other choices we could make, other vegetables — not squash, not carrots — that might not cause children to be so disobedient and to flounce. Vegetables that won’t elicit so much drama at our table.

Or perhaps the broccoli war is just a part of the bigger vegetable war, a war eternal that all parents have been fighting with their children since man was hungry enough to forage broccoli. I just have to learn to deal with it.

Maraya Steadman is a stay-at-home mother who lives in a Chicago suburb. See her biweekly “The Playroom” column at magazine.nd.edu or at her website, marayasteadman.com. Email her at maraya@steadmans.org.