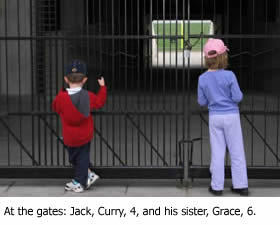 I was expecting this to be an emotional trip back to campus. It was to be mine and my mother’s first trip back to Notre Dame since the death of my father nearly six months prior. My father, Joseph L. Shilts, was a double Domer who had been born and raised in South Bend. He was the son of a Notre Dame graduate and a former dean of engineering as well. My mother, Gretchen Daschbach Shilts, went to Saint Mary’s, and my parents were married in the Basilica by my father’s brother, James L. Shilts, a Holy Cross priest. Notre Dame is my family.

I also knew the trip was going to be emotional because it was the first of what I hope to be many trips to the campus with my two young children, Grace, age 6, and Jack, 4. It was a trip that would stir up old memories as well as create new ones. It was my husband George’s and my first trip back since we witnessed the painful loss to Air Force in 1996; a game we had attended with my parents. It was my mother’s first trip back since last summer when she and my dad attended his 50th reunion. For this visit, we had not come for the game against North Carolina. We had come just to be.

The trip started out as well as I could have hoped—daily Mass at the Basilica with none other than Monk as celebrant. I felt that the red carpet was being rolled out just for us. Lunch with a dear CSC friend, who was able to squeeze us in between office hours and the afternoon class he was to teach. We walked (and walked) the campus until Jack finally understood that “Notre Dame” was far more than the stadium where he faithfully watches on TV his favorite Number 3 run fast. We stumbled across Mass at the Grotto, where the students looked so young and I felt so old.

Grace and Jack delighted not so much in the buildings and the statues but in running through the leaves on a campus where fall had definitely decided to stay. We were having a wonderful time, though the tears were present with the tangible loss of my father. Much to my mother’s delight, we even finagled an invitation for her, a hospice chaplain, to attend our friend’s afternoon lecture on medical ethics.

We had dropped my mom off in class, truly a Kodak moment for the family album of the 72-year-old grandmother sitting next to a sweet young 20-something in the classroom. We left DeBartolo Hall and found ourselves right outside the stadium. To my delight we happened upon the students in the stadium painting the helmets. The entry gate was open as we walked toward it, and my excitement grew at the thought of the amazing picture my kids would be able to bring to show-and-tell of them standing next to the big kids painting the Irish helmets gold.

As we approached the gate, a young woman was exiting. I asked with a smile if I could enter to take a picture of my kids standing next to the helmet-painting students. With a flip of her hair and the rudest of tones, she said only, “No.” Unable to stop myself, I replied, “I hope you remember that when you bring your kids back to campus for the first time.” As she walked away, she said over her shoulder, “That was uncalled for.”

We continued our walk around the stadium, Jack in pursuit of the much-anticipated meeting with his hero, Darius Walker. I was devastated. The lack of empathy by the current student for what could have been a legendary childhood moment was appalling. How simple it would have been to have said, “I’m sorry, but due to liability issues, we are not allowed to let anyone enter.” As an attorney quite sensitive to risk issues, I could have easily understood this explanation. I could actually have understood, or at the very least been ready to accept, any explanation. I was offered nothing.

I was also dismayed at my own behavior. How quick I was to put my children before the needs (wants?) of others! As we continued walking, my son called out in pure delight, “I see it.” We had come to the north tunnel, and through the gates he was able to see the field and the north goalpost. The two kids pressed their faces through the gate, staring longingly onto the field.

I won’t refer to him by his name on the off-chance that news of this could hurt his employment, but a man whom I will call Joe stopped his golf cart behind us as I was taking a picture of Grace and Jack. He said with a smile, “If you would like to follow me, I can let you in the stadium.” Reminiscent of one of my dad’s favorite jokes, “Wood Eye???"

He took off at a clip that I didn’t realize golf carts could travel at and passed the entrance where the students were still painting the helmets. Running with my daughter and my husband as he carried our son, we tried hard not to lose our newest best friend. He stood at a nondescript door waiting patiently for us to catch up. We entered a small room decorated with jerseys and what appeared to be visiting team paraphernalia, a Tar Heels image greeting us head-on. Joe called for the elevator and said, “I will show you where Regis watches the games when he is here.” We rose to the 5th floor of the press box, exiting the elevator with the same reverence and hushed voices we had used hours earlier at the Basilica.

At a rapid place, indicating we were definitely in a place we shouldn’t have been, we walked past staff setting up tables for the Victory Dinner. Joe explained that the team is served dinner together in this area after every win. Something I’d never heard of when I was a student!

We quickly came to end of the hall and stood outside a door marked “President’s Box.” Joe said this box is for invited guests of Father Jenkins. Regis will often watch the games from here, he noted. Ever searching for the perfect Christmas-card photo, I mentioned that I hoped we could get a good picture. As he unlocked the door, Joe said the view would make for an awesome shot.

The view was more than incredible. Joe graciously took on the role of photographer, positioning the entire family in different angles to provide us with several options. With a gentleness that immediately puts a mother’s heart at ease, he spoke of his own 6-year-old child, immediately establishing the connection between parents that we will work together to offer our children all we can. With a fleeting thought of the young woman, five flights below us, and, yes, selfishly hoping that she saw us enter the stadium door, I couldn’t help but think that this was the epitome of the Notre Dame family. We may not know each other’s name, but we know each other. We wish each other peace, we wish each other happiness and we wish each other true blessings. Joe was that for us.

Taking pleasure in our visible delight, Joe continued on his magical tour. Dragging the kids as fast as we could, we arrived at another door sporting a placard “Head Coach’s Box.” My favorite image from this past season is the TV shot of Charlie Weis with his arm around his son, singing and swaying to the alma mater after a win. An image that speaks volumes to me of a father’s love for his son and the pure delight of being able to bring the hallowed traditions alive to the next generation.

We snapped pictures, proof for the nonbelievers back at home that we were actually there, before continuing the tour. We passed the broadcast booth for NBC on our way to the third-floor press box. We passed the enlarged replicas of the magazine covers chronicling the legends of Notre Dame football. We passed the memorabilia on the wall, which instantly reminded me of stories of my dad selling programs as a young boy in this stadium.

Clearly enjoying his role as tour director, Joe unlocked a side room and handed each of the kids a program from last Saturday’s game. As the tour ended, we wished Joe well and thanked him profusely. My faith in the Notre Dame family was restored, and the memory of the young student was now compared to the incredible generosity of Joe. Had this young girl said yes to the picture, Joe would have driven past without seeing the kids’ longing at the gate. We would never have seen the stadium from the inside, nor would I have gotten the ever-elusive fabulous Christmas photo. I would not have experienced the disgust over the treatment of others, and therefore, would not have been as appreciative of the generosity of others.

I felt my dad’s loving care once again. He was there, looking out for me and my kids, helping me pass on to the next generation the beautiful traditions of Notre Dame and the important lesson in life—to give of ourselves to others.

Bernadette Shilts Curry and her family live in Fairfield, California. She can be reached at bernandgeorge@yahoo.com.