It’s fitting that Sheldon, the eponymous character in Dave Kellett’s comic strip, made his fortune in software. After all, his creator has maximized technological advances to become a leading online cartoonist.

Clinton Era readers of The Observer, Notre Dame’s student newspaper, fondly recall Four Food Groups of The Apocalypse, the ’96 grad’s daily comic strip following the on-campus lives of four students. “It was totally hilarious,” says Chris Stackowicz ’99, an artist in South Bend. “I remember it being just edgy enough to push buttons but not too much to incite total controversy. It really did provide a good gateway into student life and the mentality of Domers.”

Although Sheldon served as a minor character, Kellett eventually brought him to the forefront. “I just found the most joy in writing for him as time went on. It’s always fun to write for a short, somewhat sarcastic billionaire,” he says with a laugh over lunch at a locals’ favorite Mexican restaurant near Los Angeles International Airport.

During Kellett’s senior year, Notre Dame nominated him for a Rhodes scholarship. The committee did not select him, but Kellett’s disappointment was tempered by a most unlikely source. “Be happy you didn’t get it,” David Link ’58, ’61J.D., then dean of Notre Dame’s Law School, told him. “You would have ended up a lawyer — everybody who wins a Rhodes becomes a lawyer.” 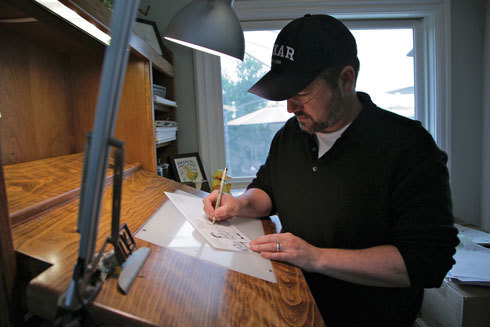 After graduating from ND, the Carlsbad, California, native moved closer to his hometown to pursue a master’s degree in literature at UC San Diego. But the Rhodes application process had planted a seed, and Kellett found himself hooked on the idea of a tuition-free, post-graduate year abroad. “I began searching for different programs. Fortunately, I won a Rotary scholarship to study World War II cartooning in England.”

Despite his natural affability, he struggled to find a social circle during that first semester at the University of Kent. So he picked up a pen and turned to an old friend for comfort: cartooning. “It was the perfect time to shoot for syndication, which was always a dream of mine.” Kellett then decided to give Sheldon his own comic. Although he had only minimal emailing experience, the cartoonist built a webpage and began posting his comics. He emailed the link to friends and family, and quickly found an exponential increase in viewership — one thousand unique visitors. “Still,” he says, “I never imagined that I could make a living online” with the cartooning.

Following his year overseas, Kellett moved with his high school sweetheart-turned-wife to Los Angeles, where he took a job at Mattel. “I started out as a writer, creating the toys’ names and their backgrounds and worlds. It was humorous, whimsical and joyful — a great job.” He kept drawing Sheldon at night, spending 30 hours per week on his passion project.

Nearly seven years later, he still revels in the freedoms absent in newspaper syndication. “The amazing thing for me is that, especially as an artist, I have no boss,” he says, “I can change my format, I can change the style of humor, I can cover whatever topic I want. If the idea requires a tall panel, then I do a tall panel. It’s liberating.”

This brave new world of online comic strips — where money can be made by allowing ads to appear around the strip and by selling T-shirts, books and original art — also has provided more opportunities for artists. “Back in the day, for Garfield to get added to the comics page, another strip had to be removed,” he says. “Online, there is no limit of successful titles.” A tradeoff exists, of course. “On the other hand, the overall size of the audience, much like every media form today, is much smaller.”

The father of two is quick to mention that fewer readers does not necessarily equate to less income. “If you crack the code with the right person, they will spend hundreds of dollars on your work. And you only need a few thousand of those, and you’re doing alright.”

Not all cartoonists share Kellett’s enthusiasm for the technological age, and he is empathetic to their plight. “Syndication was such a jewel. And people made a lot of money. That was the brass ring. And now it’s been taken away.” These days, he says, “the artists are being told to go sell things online. If you’ve been doing things a certain way for three or four decades, that’s a tough adjustment.”

But don’t go branding Kellett as the brash punk lacking respect for his elders. Gary Tyrrell, creator of fleen.com, a webcomics blog, says, “Dave’s very well-respected for his in-depth knowledge of both the history of comics and cartooning, and for the very careful thought he puts into both the current state of webcomics and its future.” Those qualities are evidenced by his dedication to Stripped, a documentary on the art of comic strips. He spent four years on the project, which he co-wrote, co-produced and co-directed with friend and filmmaker Fred Schroeder. Kellett calls it “a love letter to comic strips.”

The two men interviewed a veritable red carpet of cartooning celebrities — Mort Walker ( Beetle Bailey ), Jim Davis ( Garfield ), Cathy Guisewite ( Cathy ), and 70-plus others — and got them to talk about the art form they love and what happens to it as newspapers die. The film’s website describes it as discussing “how cartooning works, why it’s so loved,” as well as “pursuing art in an age when the business of art is changing constantly.”

Talking about the project, Kellett suddenly cannot contain his excitement. He leans forward to reveal Stripped ’s biggest news: legendary cartoonist Bill Watterson’s involvement. Following his abrupt discontinuation of Calvin and Hobbes, Watterson disappeared from public view and fiercely guarded his privacy. Fully aware it would be the longest of long shots, the documentary co-producers asked him if he would agree to be interviewed and if he would also do the artwork for the movie poster. To their utter amazement, he agreed to both.

Kellett bounces in his seat as he describes his reaction: “Unreal! The 10-year-old in me pinches myself. I gave him no notes. ‘Do whatever you want!’” He adds that the film’s team is thrilled with the result. Tyrrell says, “If there were nothing else to recommend the movie — and I do not believe that at all, having seen early clips and extended interviews with Jim Davis and Scott McCloud — it would still be a blockbuster for the very simple reason that Bill Watterson broke decades of reclusive retirement to participate.”

Stripped is an artist-controlled project. “We’re taking the middle man out of it,” Kellett says, with DVDs available at Topatoco.com and download sales available on iTunes and VHX.tv.

Yep, there’s that technology, again. Kellett illustrates his comics on a Cintiq, a graphics tablet that allows him to draw directly “on” the display surface. “Working digitally is kind of magical,” he says. “You can make digital changes that would take hours on paper.” But he’s not chained to his computer station. To keep things fresh, he’s teaching himself watercolors to “stretch a little bit. I wish at ND that I’d taken more art classes. I only took one, but I wish I’d taken 40 more.”

As an undergrad, the Grace Hall resident double majored in English and Spanish. So it was not that surprising when he doubled his comic workload in 2009 by introducing Drive. The weekly strip’s action takes place in the year 2401 under a second Spanish Empire. Naturally, Drive appears online.

Kellett has been using technology to reach his audience for 16 years, and drawing Sheldon ’s title character for four more. Has he grown tired of staring down at the same face for so long? The cartoonist shakes his head. “The beautiful thing about the strip in the format I’ve created is that if I ever get bored, I just bring in a new character.” His face lights up, like he’s thinking of an old college buddy. “I’ll be doing a version of Sheldon till the day I die.”

Jamie Reidy is an author and screenwriter in Manhattan Beach, California.