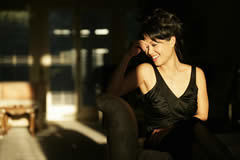 Ask actress Emily Liu, a Notre Dame graduate, how she knows she’s in the right business after nine years struggling to establish herself in Hollywood, and she’ll tell you about an audition she had a few years back.

She was in an improv comedy class when one of her classmates told her she should audition for a new improv TV series. The classmate, part of the production company doing the show, said they were looking for an Asian female. Liu is the daughter of Chinese immigrants.

Liu asked her agent to arrange an audition. The next morning the agent calls and tells her to be at Paramount in one hour. She rushes across town and enters the office where the auditions are being held. As she goes to sign in, she notices a photograph of someone she recognizes lying in the waste basket.

It’s her own headshot.

Daunted, she tells the receptionist that she’s there at the suggestion of her friend with the production company. Moments later she can overhear this information being relayed to the producers in the next room.

“Your girl is here,” says one of the producers.

“She’s not my girl,” replies the woman from class, tartly, which Liu interpreted as the woman covering herself in case Liu bombed.

Although tempted to bolt, Liu went through with the audition.

The producers — seven of them — laughed their heads off, she says, as she improvised an argument between a wife and husband, played by a staff member. A short time later she was invited back in and gave another bravura performance.

So she got the part, right?

“I didn’t get it,” she says without a note of regret.

Going into a Hollywood audition and coming away with the job, she explains, is like winning the lottery, a near-impossibility. You’re there more to show you can do the job of acting in the hope that they’ll remember you for their next project.

Because, she says, the experience taught her that she was now strong enough, resilient enough to do the job under the most confidence-killing of circumstances and not let the casting verdict condemn her to depression and self-doubt.

That might sound like delusional rationalization, especially after Liu tells you she’s forever finishing among the top three or four runners-up for parts.

But her resilience, mental toughness, talent, beauty, hard work, luck or something finally appears to be paying off. In the past year she’s had significant roles in two successful independent films — successful not because you’re likely to have heard of them but because they were both purchased for theatrical distribution. Rarer still, the actress herself served as one of the producers on one. She also appeared in three national commercials; the one she did for Cisco Systems ran during the Super Bowl.

She had her favorite theatrical experience to date in 2008, acting in a radio drama, Boats on a River. She also made guest appearances on a number of TV shows, the best-known being ABC’s Boston Legal.

“I play a lot of professionals — teachers, lawyers, doctors,” she says. “That’s just being Asian.”

And therein lies another career challenge. Hollywood has traditionally not been the land of lead-actor opportunities for racial minorities. “There’s no Asian Julia Roberts,” says Liu.

She’d love to be that breakthrough headliner or, better yet, become an A-list hyphenate like actor-producers Robert Redford or Don Cheadle. But first she has some catching up to do.

Liu didn’t start acting until she was six years out from Notre Dame, where she majored in psychology with a concentration in business. After college she took jobs in the corporate world in her hometown of Los Angeles.

She recalls one day looking at her bosses and trying to imagine herself in their shoes a few years down the road. “That’s when I realized I was in the wrong field.”

She first thought the right field might be journalism. A friend who worked for a movie channel in Taiwan asked if she’d be interested in doing interviews with Americans on press junkets promoting their films. Someone recommended she take acting classes to be more comfortable in front of the camera, which she did.

As revelations go, this one should have been about as shocking as jumping into the ocean and discovering it makes your clothes wet. She had been performing and creating almost her whole life.

Her father, Robert Liu, recalls sitting down to read a newspaper one day after dinner when Emily was 5. “I look up and notice that she’s drawing something. I say, ‘What are you doing?’ She says, ‘I’m drawing your necktie’ and she holds it up, and it looks just like my tie.”

She graduated to oil painting at 6. Then came art competitions. At 13 she was competing in ballroom dancing. She played piano for nine years. At Notre Dame she competed with the University’s dance club. She says she also acted in a few student films.

Still, being a performing artist never seemed like a realistic career goal growing up. Her parents, Robert and Mimi Liu, are the classic capitalist immigrant success story. They came to the United States from Taiwan as graduate students, meeting at the passport office. After graduation they started a successful business, Tireco, which imports and distributes tires throughout North America. Emily’s younger brother, Justin ’00, is being groomed to take over the family business.

Making one’s parents proud is a strong element of Chinese culture, Emily Liu says. That sense of responsibility weighed heavily on her as she considered abandoning a promising business career to become an actor, she says.

It also made her determined not to fail.

Already in her late 20s, she knew she had to catch up fast. First she enrolled in a concentrated program on Shakespeare at the Royal Academy of Dramatic Arts in London. Then came a summer at the American Conservatory Theater Program in San Francisco.

Returning to Los Angeles, she knew that success in the entertainment industry depended on connections. She didn’t have any. So for the next several years she spent nearly every waking hour in meetings, business lunches, auditions. If she didn’t attend at least two events every night, she says, she felt like she was loafing.

Professional acting gigs came slowly. One of her first was playing a potential love interest on the soap Port Charles. She landed a small role as a professor in Spike Lee’s 2004 TV movie Sucker Free City.

That same year she was cast in a low-budget independent film, A Good Day to Be Black and Sexy, by a first-time writer-director, Dennis Dortch. The movie consists of six vignettes; Liu appears in the last one, trying to keep her Chinese-American family from finding out about her African-American boyfriend, who is hiding upstairs.

The film was selected for the prestigious Sundance Film Festival in 2008 and drew critical acclaim and a distribution deal.

Liu wondered if she couldn’t produce her own movie. There were so few opportunities for minority actors, maybe she could create some.

She talked the idea over with friends. One was Jennifer Siebel, an actress she’d met at the conservatory program in San Francisco who is now Jennifer Siebel Newsom, wife of San Francisco Mayor Gavin Newsom. Another was Gene Rhee, an aspiring writer-director in Los Angeles who is Korean-American.

The result was The Trouble With Romance, a collection of four vignettes that takes place in a swanky California hotel. Rhee produced, directed and co-wrote the script in which Liu appears in the final segment. As producers, it was up to Rhee, Liu and Siebel to raise the approximately $200,000 it took to make the film.

“She pushed and pushed. She would not take ‘no’ for an answer,” remembers Liu friend Teddy Zee, a producer on Will Smith’s The Pursuit of Happyness and Hitch.

The reviews were mixed.

The New York Times reviewer Jeannette Catsoulis wrote that the vignettes ranged from “grating to pointless to thoroughly disgusting.”

But the San Francisco Chronicle cooed, “Rhee’s feature debut is in some ways a textbook for how to make a great low-budget feature: Start with a really good, tightly written script, hire some terrific, trained, hungry actors and shoot it economically on small interiors.”

Liu says the production team was simply looking for a script they could do easily (check) and cheaply (check), one that would have enough commercial appeal to attract a distributor (Warner Bros., check), so they could repay their investors (not yet, but possibly soon; Liu says they’re waiting on Warner Bros.).

Her hope is that by succeeding financially her first time out she’ll have the cred as a producer to do something closer to her heart next time. One possibility would be a movie about her paternal grandfather, Liu Fang-Wu, who in 1942 led a vastly outnumbered regiment of Chinese in the successful ousting of the Japanese from Burma.

In the meantime, Liu lives the surprisingly busy life of an intermittently employed actor. She still hustles auditions and meetings at almost every opportunity, though she’s no longer spending hours in her car, and her car is a BMW.

She works out five days a week, sometime chatting afterward with actress Cameron Diaz. She also works out her acting muscles. For five years Liu has studied under noted acting teacher-coach Diana Castle at Castle’s school in Los Angeles, The Imagined Life. Castle says her initial impression of Liu was that she was very beautiful and an “efficient” actress. Now, Castle says, “She’s gone from being a performer to being transformed by the story.”

Liu was involved in one other major production this past year: her wedding. The groom was Los Angeles attorney Clinton Foy ’93, whom she knew at Notre Dame but didn’t date. They ran into each other at a friend’s birthday party last year in Los Angeles, she says.

Now comes one more challenge: balancing her desire to start a family against her high ambitions in a field where the odds of success compare to Powerball drawings.

“Someone told me that Hollywood is like an abusive boyfriend,” she says. “Every time you want to leave, it sends you flowers.”

Tinseltown shows no signs of changing its cruel ways, but after nine years Emily Liu can at least take heart that the bouquets are coming more frequently.

Ed Cohen is a former associate editor of this magazine who now lives in Reno, Nevada.