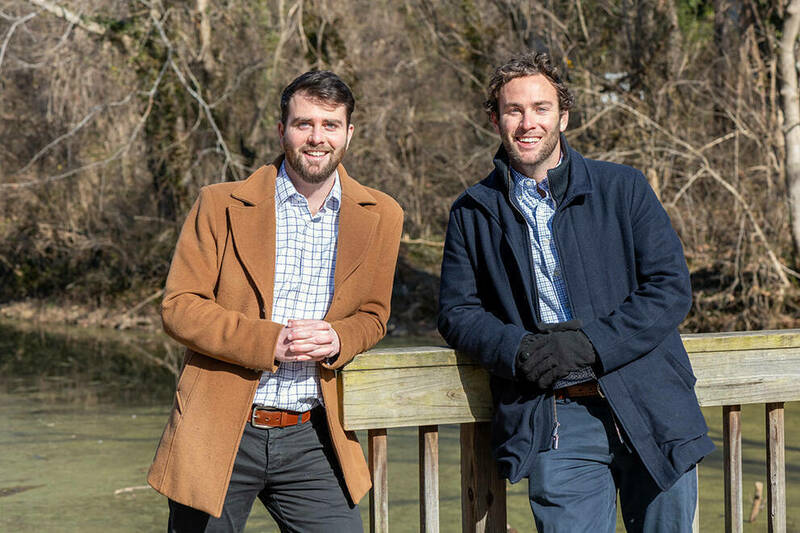 “I was a senior writer on the Olive Garden account, so it was a lot of talking breadsticks and family, just every day for a year,” he said. “So it got a little stale. Similar to breadsticks.”

By most standards, the former marketing major’s career was off to a strong start. He had already worked at two prestigious Chicago advertising firms in his first few years out of school. But Conaghan ’15 wanted more from his livelihood than financial security. Right on cue, his brother William, then a graduate business student at Trinity College Dublin, called with a proposition.

Two weeks later, Conaghan says, “I bought a one-way ticket to Dublin. I left Chicago, left my advertising job. . . . It was daunting, but it was great.”

William had offered Matthew a chance to make not only a living but an impact. Change Donations, which William co-founded as a Trinity College MBA project with classmate Lizzy Hayashida, enables consumers to donate their virtual spare change by rounding up their online purchase totals to the nearest dollar. Potential beneficiaries include dozens of partner charities from UNICEF to the local animal shelter.

Matthew says William, who’s a year older, had explained the concept to their family at the outset. “This donation idea . . . we thought would be really fun,” Matthew says, “but of course we’re all doing separate jobs and in [different] parts of the world, and we didn’t have a chance to make that happen.”

In 2017, the company took shape with the assistance of Enterprise Ireland and other agencies that support Irish entrepreneurs. “It’s becoming a reality,” William told Matthew in that fateful 2019 phone conversation. “We’d love for you to come over here and help [us] grow it.”

So Matthew Conaghan moved to Dublin to run marketing for Change Donations. This year the company expanded to include charities in the United States.

“My goal,” Conaghan says, “is to have any cause that anyone wants to support there with a click of a button.”

Donors can download the company’s mobile app and link their payment information for free. Purchases appear in the app, which allows the user to allocate money to as many as 10 charities that then receive their funds at the end of the month, minus the company’s 15 percent fee.

“In Ireland, it’s an entirely novel idea,” Conaghan says. “There’s no other company that does round-up donations.”

Credit cards and digital banking are less common in Ireland than in the U.S., which presented challenges of culture and habit. But the COVID-19 pandemic shifted Irish consumer behavior in favor of cashless transactions.

“There’s no more change in a bucket. . . . We are the safe alternative,” Conaghan says. “The other side of that coin, no pun intended, is that we don’t really want to ask people to be donating during a time of crisis.”

“We work with this really small mom-and-pop shop out in Galway, they’re an animal shelter run by two people in one house,” he says. “Their spare-change donations feed almost all the animals.”

Back at Notre Dame this past September for the first time in years, Conaghan sipped coffee as he admired the unfamiliar Duncan Student Center. He had been named one of the 2021 Domer Dozen, exemplary young alumni recognized at halftime of the ND-Toledo football game.

He recalled a course he took as a junior, Confronting Homelessness, that shapes his approach to Change Donations. Working with the South Bend Center for the Homeless, he learned that no blanket solution could address everyone’s problems. Meeting individual needs is essential.

“I think that mindset has really translated into how we talk with nonprofits and how we want to help people,” he says.

As a member of the Notre Dame Men’s Boxing Club, he helped raise money for Holy Cross missions in Bangladesh. The positive impact of small donations was always on his mind.

And, he adds, writing for the annual Keenan Revue helped him find the confidence he needed to advertise corporate brands those first few years out of school. The experience cultivated his creativity and an appreciation for the rewards of taking risks.

“You may think that everybody’s doing something great right away, but in reality, they’re not. Everyone’s learning and there’s a lot of trial and error, so I would say to any younger students, now’s the time to do what you love,” he says. “Now’s the time to fall on your face — or succeed.”