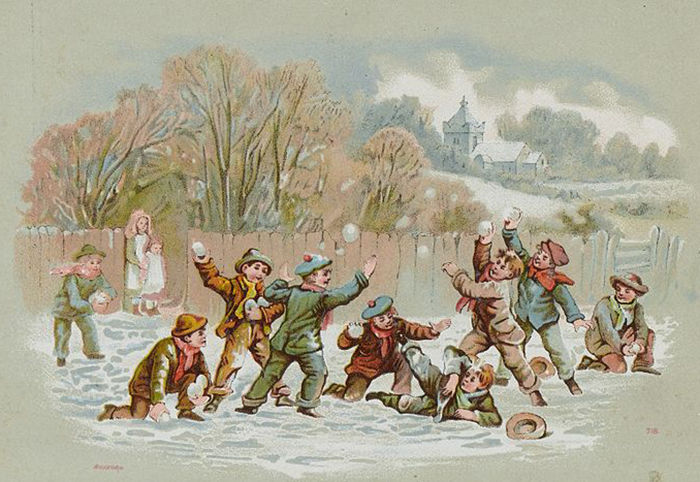 After the first two feet of snow fell on Christmas Eve, my father declared that we couldn’t drive into downtown Buffalo for midnight Mass at the cathedral. I was home from graduate school in Virginia at the time. That afternoon I stood at the living room window, disappointed, and watched him fire up the snowblower to clear the driveway and sidewalk, a futile task he’d just have to repeat in a couple hours. No one was walking past the house anyway.

My parents lived on the leading edge of suburban retreat from the city, in a development called The Meadows. When I was home for Christmas, I always badgered them to go to the cathedral. I was studying religion and reading books on theories of liturgy and celebration. The authors convinced me that the only way to honor God becoming flesh in the Incarnation was to give it your best. I figured that meant incense. Gothic grandeur. An erudite homily. A choir. A brass quintet. Every pew filled with well-dressed families singing every hymn. I wanted a Mass I could consider worthy of the world-changing event we would be celebrating. The cathedral delivered all of it, and this year, I would miss out.

Avoiding the long drive on slippery roads meant we would have to face something far riskier: midnight Mass at our parish. The church sits at the center of a working-class suburb, near where I went to middle school. In those days Dad was in middle management for banks and retailers, while many of my classmates’ fathers worked at places like the Chevy plant or an offset printer. That kind of work became scarce in the years after I went off to an all-boys Catholic high school and then away to college. I lost touch with those friends and don’t know how long their fathers stayed in those jobs, or what happened when they didn’t.

We took our usual pew for the midnight Mass: left side, a third of the way up from the back. I looked around at the faithful and saw men wearing jeans too small to keep their girth in decently and women whose hair had the crunchy, golden texture of a Friday-night, beer-battered haddock fillet. Many clad themselves in red, white and blue nylon Buffalo Bills jackets.

The pastor had the round face and bald head of a laughing Buddha, but he was no great preacher. While the bishop downtown was probably dropping references to Dante’s Paradiso, Father Dave told a story about Maggie, a little girl whose self-centeredness one Christmas was transformed by the plight of her seriously ill baby brother. I rolled my eyes at the treacly lesson.

The music was awful. The enthusiastic leader of the small folk group strummed three chords on her giant guitar, backed by a trumpet and a tambourine. I don’t recall if they attempted “Silent Night.” I hope not. Whatever they played, no one sang along.

During the Mass, another six inches of snow had fallen. Big flakes floated down from an infinite darkness into the yellow sodium glow of the streetlights. I tucked my scarf into my herringbone topcoat, a hand-me-down from my father. As we descended the narrow, unshoveled steps to the sidewalk, something zipped across my field of vision — a snowball. Then another, a hurried counterattack from the other direction.

The conflict escalated. One teenager in a Bills jacket and heavy snow boots pelted his sister in the back, right between the L’s on her jacket. A bearded, beer-bellied man bent down, scooped up some snow, packed it into a ball, reared back and — unaccustomed to throwing things anymore — slipped on the follow-through, grappling for balance as if gasping for air.

I want to picture the event as a magnificent chaos embroiling the whole congregation, including the altar boys and girls, the folk group with their guitar and trumpet cases, and even Father Dave in his vestments, all against all and spilling into the street, flailing and shrieking in pretend pain and real laughter. The truth is, it was probably just one or two families, and Father Dave was already safe and warm in the rectory.

As my parents and I brushed the snow off our car, I observed the scene but didn’t join in. How could I? It’s one thing to throw a snowball at your cousin. It’s something else — assault, arguably — to throw one at a stranger. Who does this guy think he is? my target might reasonably have thought. I’ve never seen him here before. Still, in that moment, I wished I was someone different. I wished I wasn’t a stranger. I wished I was someone who would see new snow and immediately sink his bare hands into it.

I magnify the snowball fight now because it crystallizes my misgivings about who I was then becoming, 18 years ago. My family’s upward trajectory had given me an acute sense of propriety and unseemliness. Academia trained me to stand at a safe, analytical distance from experience. These dispositions eased my path toward the professional and cultural world I wanted to inhabit. But they also removed me from a community I once knew and a willingness to indulge in fundamental joys. Now they seem directly opposed to what Christmas is about: fully accepting the experience of life in a human body, holding nothing back.

I had misread my theology books. The choir-and-incense Mass wasn’t the superior celebration; the snowball fight was. The right way to honor the Incarnation isn’t to offer up your best approximation of bourgeois goods. It’s to be comfortable in your own skin.

Jonathan Malesic is a writer living in Dallas who is working on a book about burnout. His work has appeared in America, Commonweal, The New Republic and The Chronicle of Higher Education.