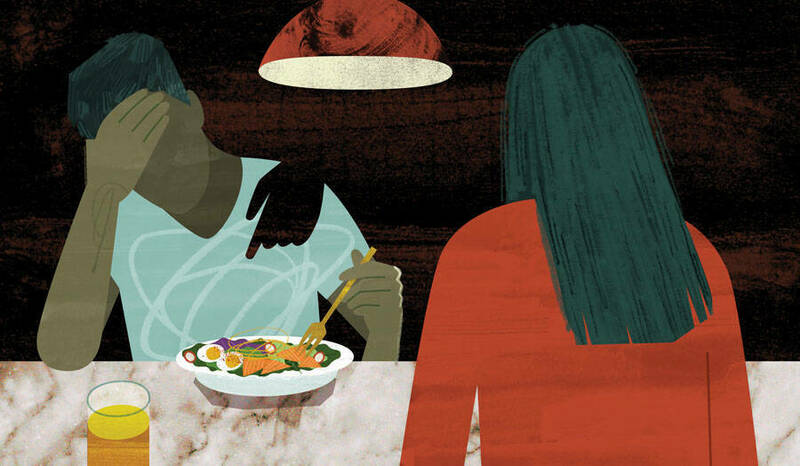 In late June four years ago, my 85-year-old father made several emergency visits to a hospital in Buffalo, New York, where I grew up. He was being treated for leukemia and got a C. diff infection along the way. If the chemo was going to work, he needed to beat the infection, but the chemo had ruined his immune system. He was sleeping 20 hours a day and seemed to spend the other four on the toilet. When he went back to sleep, my mother cleaned the bathroom with bleach top to bottom.

My family is scattered across the country. I live in Dallas, and my sister in Maryland was relaying sporadic updates about Dad’s condition from our mother. I had planned to fly up to visit in a couple weeks, to help out during his third scheduled round of treatment. But first, my wife and I had planned to drive down to Austin for a weekend so I could go to a conference and she could do archival research at the University of Texas. I weighed canceling the trip, but knowing I would be going to Buffalo soon, and assured that the doctors knew how to attack the infection, I figured I might as well go to the conference. If things took a bad turn, I could fly up as soon as I got home.

When I arrived at the conference hotel, I silenced my phone, but it buzzed anyway in the middle of a panel discussion. My sister had called twice in a row. I sneaked out to the lobby to take the call, and she delivered the news that Dad was in intensive care with pneumonia. His blood pressure was dropping. Damn, I shouldn’t have come, I thought. For the next hour, as people exchanged professional banter around me, I searched for flights, Googled C. diff and texted my sister to find out was happening and when everyone would arrive at our parents’ house. I emailed a friend who’s an oncologist to ask about the prospects for a man in my father’s condition, but I didn’t wait for a reply before booking the earliest flight I could get: a one-way leaving Austin the next morning.

Until then, what was there to do? Staring at my phone and worrying wouldn’t get me to Buffalo any sooner. It wouldn’t help Dad to hold on any longer. I would only have this one afternoon at the conference, so I was determined to get out of it what I could. I turned my phone off and went to a reception. I clamped down my emotions as I roamed around the beige-and-blue-carpeted ballroom clutching an overpriced bottle of Shiner Bock and schmoozed. What are you working on? Oh, wow! That’s really interesting. Great to meet you! At one point, someone mentioned his father, and a hot wave rushed from my chest to my head. I willed the tears to stay back.

The reception ended, and I checked my phone. Good news: Dad’s blood pressure was improving, and he was alert though breathing through a ventilator. I was not at all prepared for his death, but maybe this news meant I didn’t have to be. Not yet. My wife drove by to pick me up, and we went to dinner. Yelp steered us toward a cute corner brasserie with black-and-white-tiled floors and marble tabletops. I ordered a Kölsch and a smoked-salmon niçoise salad. I knew I couldn’t stomach anything heavier.

The feeling of anticipation after ordering your food at a busy restaurant is one of the greatest pleasures of life. It’s a rare experience of pure leisure. For a moment, you have nothing to do, nothing to decide. All will be provided in its time. The blissful enjoyment of your company, a sip of wine, a nibble of something: It’s often more satisfying than the meal itself. I like walking past the outdoor tables at restaurants in my neighborhood so I can see that feeling on couples’ faces. They grin, they sustain eye contact, and with nothing but a glass or two between them, they lean into each other. Just seeing it, I feel a lift, too. I sometimes think it may be the closest we can get to the eternal present enjoyed by the saints and angels. Theologians talk about a heavenly banquet, but maybe the eating isn’t the point. Maybe the highest happiness is to be at the banquet just before the food arrives.

I wasn’t sure if I should eat or not. I worried it would be disrespectful to cut into my potatoes, to drink any more beer. It seemed absurd to be at a decent restaurant at a moment of sudden grief.

Our evening in Austin was not like that. The good news about Dad’s blood pressure built my confidence I would see him the next day. But I was anxious anyway. While anticipating our entrees, and anticipating my visit to his bedside, I also anticipated something much worse. Or maybe it was the other way around. While anticipating the inevitable event — which could come in an hour, a day, a week, or, God willing, sometime much later — I waited for my dinner to arrive.

I don’t recall what words my wife and I exchanged after we ordered, just my worry. After a few minutes, my phone buzzed. It was my sister. I answered while walking out the door and onto the sidewalk. She asked if this was a good time to hear bad news. I said it didn’t matter. Whatever it is, I said, just tell me. Through tears, she said he was gone.

We spoke for several minutes. She told me how Mom was doing, how she was going to get home. I thought about what it would be like for my mother to sleep alone that night after 59 years of marriage. As the side of my face beaded with sweat against the phone, I looked down at wooden shelves of potted succulents in front of the small grocery next door to the restaurant. I gazed at those humble, spiky plants, becoming entranced. My sister’s voice seemed to grow more distant until I no longer heard what she was saying to me. All I could say was, “I know, I know. I love you, too.”

I went back inside, and my salad was on the table, its components glistening and topped by a tuft of frisée. I told my wife the news. She hadn’t touched her food yet.

I wasn’t sure if I should eat or not. I worried it would be disrespectful to cut into my potatoes, to drink any more beer. It seemed absurd to be at a decent restaurant at a moment of sudden grief. I thought I should be somewhere solemn. Or I should at least be at home, where it would be fine to be solemn, even miserable, where I could just lie down, numb, holding undue pleasure at arm’s length.

I thought maybe we should call for our check and a couple of boxes. But then what? When would it be OK to open them again? Humans have had millions of years to develop taboos around death, including how we communicate news of it, but it has only been in the last decade that you could find out that your parent died, thousands of miles away, while you’re eating at a restaurant or using a public  restroom or driving home from a movie.

We stayed and finished our meal. We were sad, but the food was good — as good as I’d anticipated. I still wish I hadn’t been there at all, that I had been at the hospital in Buffalo instead. Nevertheless, people will die, even the people we love the most. These losses are devastating, irreparable. We carry such absences with us forever. But sooner or later, we who remain will need to eat.

Jonathan Malesic’s essays have appeared in America, Commonweal, The New Republic and The New York Times. He is the author of The End of Burnout: Why Work Drains Us and How to Build Better Lives.