Day 1
It started innocently enough. We had scarcely enough time to swing from Houston to Chicago to Madison to South Bend to Bloomington in six days — no time to fool around — we had a job to do. 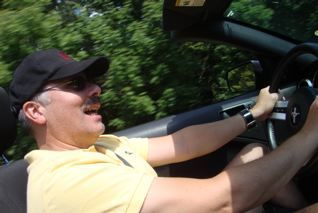 Who starts on a multi-thousand mile drive at 6:30 in the evening? I was worried about falling asleep. Leave it to my 17-year-old daughter to propose a solution: We’ll just drink Red Bull the whole way.

It takes being stuck with a teenager in a car for six days to discover the subtle differences between the seemingly hundreds of different flavors of energy drinks. It doesn’t take long to realize that if you are constantly slamming these little miracle cans you will have to stop quite often. We counted three bathroom breaks in the first 90 minutes alone!

We’re never going to get there…

It took about five seconds for my daughter to take possession of all music devices in the car. First request, Dad, stop at the next convenience store to get an iPod cord for your stereo (the purpose of this being that she could then act like a DJ with her iPod and my stereo). Then she adjusted all the controls to match the non 48-year-old settings of HER car. I actually believe my heart rate is now regulated by the bass in my car’s stereo system.

By the way, did I tell you I’m hooked on Monster…

It didn’t take long to pick our theme song for the trip: “No Sleep Tonight” by The Faders. In honor of The Faders we did not sleep until morning — 2:30 in the morning that is. We actually made it all the way to Little Rock in the first leg. 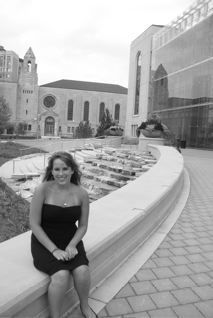 Day 2
Waking up at a truck stop motel after just a few hours sleep was interesting – it was pretty deserted by the time we got up. We headed to the diner next door. We went for a skillet breakfast with a Red Bull shot chaser. We did get some stares at the truck stop — I hope they are staring at her because she’s beautiful and not because they are wondering why she’s hanging out with a 48-year-old dude in a convertible Mustang, with music blaring, side mirrors pulsating to the bass turned to the max, cruising down the highway with a gorgeous 17-going-on-25-year-old, long-haired, mascara-clad, green-eyed brunette.

This morning’s epiphany: my daughter declared that mascara plus hair straightener does not fit into the trucking lifestyle — she decided to stick with college.

We proceeded to drive though Arkansas. Nothing but green. This is awesome weather though – I had forgotten that the rest of the country doesn’t bake like H-town (as my daughter informed me our home city is called these days).

We have grown attached to our growing collection of energy drink cans in the back seat — we really can’t part with them.

She laughed when I said just toss the empties in the back seat. Who knew coffee was such an ineffective drink? Starbucks is like drinking milk when compared to Red Bull. We are flying down the road, totally wired, not tired at all. What are a little headache and burning esophagus when you’re having fun?

Have you ever noticed that in a convertible all hard rock sounds good? As a matter of fact, I learned that today’s music is DAMN good – especially if it is real loud in a convertible with the top down as massive amounts of caffeine and taurine race through your blood stream. I might even warm up to rap before this trip is over.

Day 3
I have no idea where we are, space and time have become one. This second morning we decided to jumpstart a little faster than the first—breakfast of Red Bull with an egg/bacon chaser.

Braggaduccio, Missouri — my daughter pointed at the road sign and laughed. I spit my trail mix out all over the dashboard. Everything is funnier on less sleep. Note to parents considering this energy drink experience – drink it, but don’t look at it, they have a very disconcerting unnatural, iridescent color.

We keep sending random texts to my wife and youngest daughter still at home — who knows what they think is going on. I think my youngest daughter thinks the Midwest is a wild, rowdy place. She’s now considering it for college as well.

Day ?
1:30 PM – What day is it? I think we’ve only been gone less than a day? Did you ever notice you don’t get hungry when you’re on Red Bull? Lunch today was a banana and an energy drink.

You know how your electronic devices detect various networks as you drive through a city? We invented a new game – find the most unusual personalized network name. The winner: “underpants_gnomes.”

Loaded on Red Bull, 1,453 pieces of songs a day out of 2,859 on her iPod, jumping from topic to topic, I REALLY had forgotten what a teenage brain feels like!

And finally, there it is, our first stop, Chicago! A real hotel. Actual food. Sightseeing. Cleansing the system. Back to normal.

For the next four days I sat back and watched as she toured, asked questions and was interviewed, always looking for clues of what SHE thought was important in this quest. She quickly realized how each campus had a personality. Each school had something unique to offer. And that it was just as much about her interviewing the school to find the perfect place for her than it was the school’s job to select the best candidates. In this first big break towards adulthood, I found her taking charge. This was her life, not mine. This was her choice to make.

At the end of the trip, she did not choose any of the five outstanding colleges we visited.

To my daughter: I can now see that I will be ready to let you go. I have experienced the wonderful world of college life – and I want that for you. Thank you for letting me see this college search experience through your eyes. Thank you for this time together before I have to say goodbye to you. You don’t realize what a gift you gave me.

John Clements ’84 is a principal at Jackson & Ryan Architects in Houston, Texas, where he heads the firm’s design of churches and private schools.