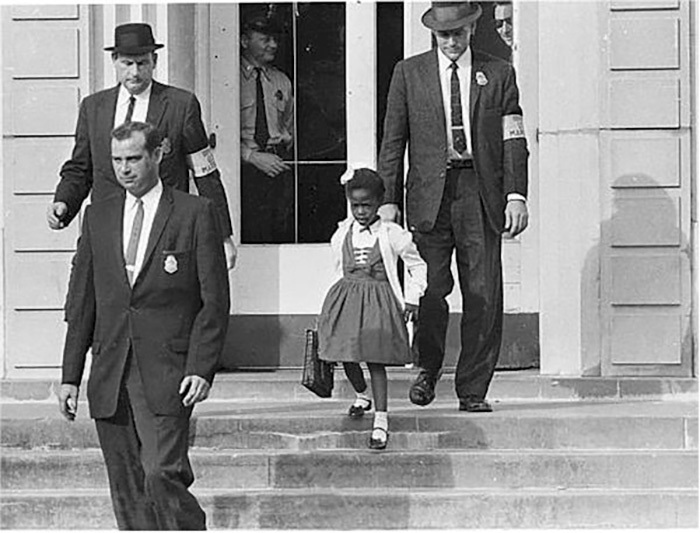 In New Orleans in 1960, 6-year-old Ruby Bridges needed protection from protestors objecting to her presence at school.

As crowds outside chanted, screamed and demanded continued segregation, Ruby Bridges learned a valuable lesson as the only Black child in a previously all-white school in New Orleans in 1960.

She and her teacher, Barbara Henry — a white woman who was the only instructor in the school who agreed to teach Ruby — proceeded with their lessons. When the angry crowd outside grew too loud, the teacher turned on the radio.

“The lesson that I took away from that classroom, that first-grade experience, is the exact same lesson that Dr. (Martin Luther) King tried to teach all of us,” Bridges said during a virtual talk November 5 to an audience at Notre Dame. “That we are to never look at a person and judge them by the color of their skin. You honestly have to judge a person by the content of their character. You have to allow yourself an opportunity to get to know them.”

Her teacher taught that lesson by opening her heart “and it shaped me into who I am today,” Bridges said.

“Racism is extremely dangerous. Racism has a way of making you think that you can only trust your own kind, people that look like you,” she said. “We know that it’s wrong, but I’m not sure we realize how dangerous it is to pass that on.”

Parents and other adults must keep in mind that evil comes in all colors, Bridges said. “And none of us really have the luxury of teaching our kids that you need to only trust people that look like you,” she said.

The event was part of the Klau Center for Civil & Human Rights’ dedication celebration and the center’s “Building an Anti-Racist Vocabulary” speaker series.

The audience included Notre Dame students, as well as invited groups of students from several public and Catholic schools in the South Bend area. The discussion was moderated by Dory Mitros Durham, the Klau Center associate director.

Bridges, now 67, is a civil rights activist, author and speaker. She was born in Tylertown, Mississippi in 1954, the year of the U.S. Supreme Court’s landmark decision in Brown v. Board of Education, which established that state laws requiring racial segregation in public schools were unconstitutional.

By 1960, many schools were still segregated, despite the court ruling. That year, then 6-year-old Ruby Bridges became the first Black child to attend a public school in Louisiana. As she entered William Frantz Elementary School in New Orleans, protesters outside shouted racial slurs, displayed signs demanding all-white schools and held up a coffin-like box containing a Black baby doll. The little girl was escorted by federal marshals to ensure her safety.

In protest over desegregation, parents withdrew their children from the school. Ruby Bridges attended the entire school year as the only child in her class.

Bridges said that she didn’t understand at the time what the loud crowds outside her school were about. Living in New Orleans, she remembers equating crowds of people with the annual Mardi Gras celebration, and she didn’t realize the protestors were angry at her.

Bridges said her parents never discussed the crowds, telling her simply to attend school and be on her best behavior. It was only later in the school year, when a white boy used a racial slur to explain why he couldn’t play with her, that she realized the crowds were there to protest her presence.

Bridges said she was a bit surprised to hear that the Tennessee group thinks her life story is harmful and wants her book banned. “I don’t think that they actually believe that, but I was surprised that they would outwardly say that,” she said. “But then I thought about it and I thought, ‘Well, why not me?’ To get the attention that they really need, they probably need to attack someone like me.”

In 1999, she founded the Ruby Bridges Foundation, with a mission of promoting tolerance and creating change through education.

Bridges said adults today are responsible for the racial discord playing out across the country “because we have taken racism and passed it on to our kids.” She told the students in the audience that important work is ahead for them. “If I could do what I did at 6 years old, you can make a difference in your own world and we are counting on you to do that,” she said.

Martin Luther King inspired young people to get involved during the civil rights movement and they made a difference, Bridges said. “They got us to this point where we are now and we cannot rest. You have to pick up the torch and you have to continue to move this country forward,” she said.

“You have to make sure that this country lives up to its name: the United States of America,” she said. “This country will never be united unless we, the people, are united.”