Richard III was the last monarch of the Plantagenet dynasty. His death in 1485 marked the end of Medieval England. His body had been lost for centuries, but it was discovered in the backlot of a churchyard, authenticated with DNA testing and subsequently reburied at Leicester Cathedral in 2015 with royal pomp and dignity. Members of the American press corps asked British subjects who attended the interment why they paid homage to a monster with a hunchback, a withered arm and a perversely twisted character, who usurped the throne and murdered his young nephews in the Tower of London so that there would never be any pretender with the slightest claim to legitimacy. The mourners, though five centuries late with their tears, responded, Because he was our king. And we left it at that. Brits are die-hard monarchists and democratic Americans will never understand that. 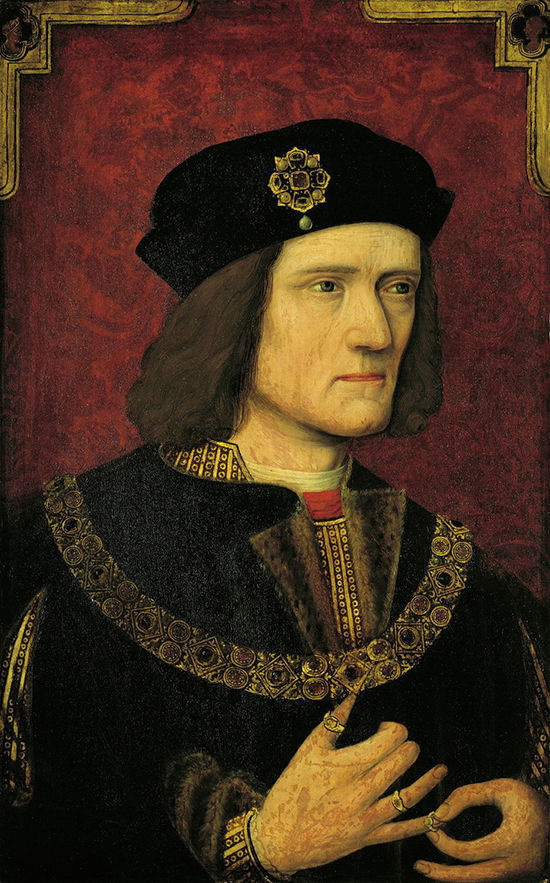 The problem is that Richard was not a hunchback. He didn’t have a withered arm. There always was a portrait, but now we have a body. I believe he was a good family man and a courageous soldier who gave his life in battle. He might have been ambitious, but despite the claims of most modern sources there is no evidence that he usurped the throne, as Harvard University Shakespeare scholar Marjorie Garber has pointed out. Instead the throne was offered to him after his dead brother’s marriage was annulled. Edward IV had married his widowed sister-in-law, so there was an issue of canonical consanguinity. That made the boys illegitimate. There is no evidence that Richard murdered them. They disappeared after Richard’s defeat at the Battle of Bosworth Field. It’s worth noting that the new king, Henry VII, first of the Tudors, stood to benefit the most from there not being any little Plantagenets lurking in the wings.

The Tudors created the myth of Evil Richard III. The victors write the history. Call it patriotism, or call it loyalty, but even St. Thomas More was called upon to write a tract demonizing Richard. Thomas never knew Richard. He was only 7 when Richard died. He skillfully reiterated the politically expedient lies of his day, what we now call spin. It was necessary in order to legitimize the Tudors, his patrons. These days, we would call it national security: Henry VIII could only lead England against the threat from Spain and France if, and only if, his somewhat dubious claim to the throne could be made to seem authentic.

The image of twisted Richard and his vile deeds is not going away any time soon. Most of us have only heard of Richard III because of Shakespeare’s play about him. Shakespeare is, after all, the Bard. The poet wrote his play more than 100 years after Richard’s death based on the accepted narrative of his time. How could he do otherwise? He was no less dependent on Tudor goodwill than Thomas More had been. Staging the party line kept the money flowing and the playwright’s head attached to his shoulders. All the world is a stage, my friend, and we are the players. More often than not, like it or not, we are often being played.

Spin is not new. Machiavelli shocked people in his day by being forthright and explicit about how things got done in the courtly centers of power. The Renaissance was, among other things, a rebirth of certain ancient traditions of treachery and deceit.

Karl Rove is regarded as the modern master. Like Bill Gates, President George W. Bush’s longtime senior policy advisor never finished a college degree, but he had a knack for how to get the story out there until it sounded true, even if it wasn’t. Inheritance tax for the wealthy went away when it occurred to him to popularize the conception of it as a death tax. Saddam Hussein became responsible for the 911 attacks because the right people said it loudly and often. So, there was a war. Rove was a genius at making the worse argument seem the better. That made him an invaluable right hand man for the commander in chief.

Until quite recently, however, there was such a thing as a counterargument. Facts, those illusive points of undeniable information on which interpretations and judgments should be based, could be invoked and agreed upon by men and women, black and white, left and right.

Facts did not depend on party lines. Matters of fact were not open to discussion. Matters of opinion were. Facts could overcome unfounded discourse, given time and space. The Red Scare of the 1950s was Senator Joseph McCarthy’s paranoid conviction that there was a communist under every bush, out to destroy life as we know it. His persecution of those he considered suspicious was very popular. It took time, but the Red Scare was argued into a corner for lack of evidence. It just wasn’t true. We have journalist Edward R. Murrow to thank for that.

My perception is that, today, some sort of critical mass has been surpassed. We have somehow tipped the scales in favor of fiction. We have chosen deception over perception. We have set myth on the all-powerful throne where truth once sat. Prejudice and irrational acrimony seem to have displaced the careful and objective regard for clear thinking and solid judgment.

That’s bad. Perhaps this is due to radicalized individualism. We live in what seems to be one great big politically correct kindergarten where every child has the inalienable right to choose what he wishes to consider true, even if there are no facts to support it, and many to contradict. We wouldn’t want to hurt little Johnny’s feelings, or stifle his creativity, now, would we?

The Oxford English Dictionary made an outrageous choice for its 2016 Word of the Year: “post-truth.” A play on “post-modern,” it would seem to indicate an age in which truth is nothing more than an eccentric personal obsession, a dated fashion from long ago. The venerable OED defines “post-truth” as “relating to or denoting circumstances in which objective facts are less influential in shaping public opinion than appeals to emotion and personal belief.” The editors have observed a 2,000 percent increase in the use of the term, and they attribute that to the Brexit vote, over there, and to the most divisive political campaign in history, over here.

The Washington Post reports, half in jest I hope: “It’s official. Truth is dead. Facts are passé.” Politicians have always lied, perhaps, but now it’s mainstream. David Frum of The Atlantic described the dishonesty of the president elect as “qualitatively different than anything before seen from a major-party nominee.” None of that, Post reporter Amy Wang commented, mattered to his supporters.

Ten years ago, comedian Stephen Colbert coined the term “truthiness” — which is not to be confused with “post-truth,” according to Stephen. He defined it as the phenomenon of believing something that feels true, even if it isn’t supported by fact. He was poking fun at right-wing pundits. But now, truthiness is not a joke anymore. Now that unreasonable feelings of racism, sexism and nationalist xenophobia appear to possess the keys to the kingdom, we will be ruled not by truth, dialogue and dignity, but by fear, scapegoating and finger-pointing. The powerful now have the authority to act on whatever feels true to them. No point in checking your facts. You can just make them up. If you are rich and famous, you will get away with it. If it fits your agenda, who cares?

The real problem with the post-truth era is not what happens in the White House, Trump Tower or Windsor Castle. The real problem is that the way in which power is exercised at the golden pinnacles of glory tends to replicate itself all the way down the food chain. In the workplace, at school, even in our families and among friends, what feels true will win out over what can be supported by fact. Machiavelli and Karl Rove are the new prophets. Hail, all hail.

After his dismissal as director of the CIA in 2005, Porter Goss was invited to deliver the commencement address at Tiffin University, near Cleveland. He told the graduates, “If this were a graduating class of CIA case officers, my advice would be short and to the point. Admit nothing, deny everything and make counteraccusations.”

I guess that was meant to be funny. It’s not, at least, not anymore. I once heard a Boy Scout leader say almost exactly the same thing. It wasn’t funny then, either. It’s not the scouting tradition: scouts promise to be trustworthy, loyal, helpful, courteous, kind, obedient, thrifty, brave, clean and reverent. This renegade was saying, Learn the arts of treachery and spin, my boy. Become a player or you will be played. I could never teach my children that. But I guess I am getting old. My world is probably gone for good.

Pessimism is not good, but realism is. Perhaps the truth will survive in the catacombs of society. (I hope there is room for me down there.) If it does, perhaps there will be a rebirth, and perhaps we will have learned a valuable lesson. It might take a while (I might not live to see the day) but anything worthwhile usually does.

Nathan Stone, a member of the Chilean province of the Society of Jesus, is on sabbatical from his work in the Amazon region of Brazil while he cares for an ailing relative. His essay, “The Boys of Brazil” will appear in our Winter 2016-17 issue, in which other essays explore themes of credibility, truth and civil discourse.