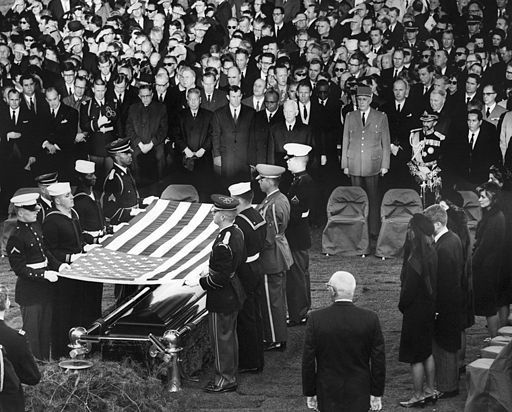 I was a junior at ND in the fall of 1963, living in Lyons Hall above the arch. Friday, November 22 was a typical overcast day. I was in my room after lunch with the window open preparing for my Shakespeare class at 3:00 p.m. We were playing at Iowa the next day and the campus was pretty quiet. A neighbor had his transistor radio on and I thought I heard something about the president being shot. I wandered out into the hallway and looked around and pretty soon there were a bunch of us talking about reports from Dallas that the President had been shot and was in critical condition. We were wondering about classes being cancelled but had heard nothing yet.

I went back to my room to keep on studying, and at 2:45 headed over to O’Shaughnessy Hall. There were about 30 of us in the class. We were feeling pretty isolated as most classes had apparently been cancelled and the building was quiet. At 3:00 p.m. Professor John Meagher walked in and with no preliminaries began lecturing about “King Lear,” which we were reading at the time. He didn’t say a word about what had happened in Dallas. The students looked at each other and just shrugged and started taking notes.

Meagher continued talking about the tragedy of Lear and the jealousies and murders and backstabbings and — slowly looking up to the ceiling with his arms outstretched — concluded with Cordelia’s words from the end of Act IV, “No cause, no cause.” Then he walked out of the room.

Nobody moved. We sat there stunned. It was a virtuoso performance. We realized he had been talking the whole time about what happened in Dallas. I have never forgotten it.

Jack O’Connell is “semi-retired” and lives in Boca Raton, Florida with his wife, Barbara.

November 22, 1967. I hear the tolling of the bell in the tower of Sacred Heart Church on the University of Notre Dame campus. It reverberates off the aged yellow brick of the building I’m sitting in and shakes the ancient, four paned, ten foot high window to my left. I’m sitting in a student desk, an ancient, wooden one that creaks and moans with my slightest movement. Its writing surface, etched with graffiti, is just slightly larger than my spiral notebook.

That school year our freshman composition class met in one of the few narrow, dank classrooms on the third floor of the Administration Building, the one with the famous dome atop it. Although this fortress of tradition consisted mostly of offices staffed by quiet, gray-haired secretaries, a few of the smallest rooms were still used for classes, and I was one of unfortunate few whose class met in one of them.

Staring straight ahead at the blank, white-dusted blackboard surrounded by cracked, faded yellow walls, I felt imprisoned. Although the room was wider and higher than most classrooms, it was deep enough for only four rows of desks. Two hanging spherical lights provided just barely enough light to write by, and the only window faced north.

I looked around. The faces of the twenty or so other students looked, probably like mine, even more troubled and more somber than usual. All I could hear was the creaking of the wooden desks and a few sighs. Though we had shared this classroom three hours a week for a bit over two months, we hadn’t yet gotten to know each other. Maybe they all still felt as I did, like a naïve, timid freshman.

Professor Vincent Tartella walked stiffly into the room at precisely 3 p.m., just as he always did. He carefully removed his gray topcoat, folded it, put it over the back of a chair as usual, and then brushed his hand across his balding head in a nervous gesture familiar to us all. The black hair that circled his head seemed to continue into the thick plastic frames of his glasses. With a faint frown, only slightly more pronounced than usual, he calmly opened the text and began the class session. We were examining the use of comparison and contrast in an excerpt from a book written by Bruce Catton about Generals Lee and Grant when they met at Appomattox Court House in April 1865. Later that week we would all write our own comparison and contrast essays and submit them on Friday, just as we did every week that year.

For two semesters we wrote a 500-word essay for Professor Tartella every single week. I probably wrote a total of 15,000 words in about 30 essays that academic year. I wrote more, I’m sure, than I had ever written in that amount of time in my whole life up to that point. Yet today, I can’t remember any of the writing I did for that course, not a subject or a title, not a word or phrase, not a thesis or an image. No, all that I remember about that course is that on November 22, l963, the day the president of our country had been shot and killed, Professor Tartella conducted class as usual.

For years I wondered why I could remember nothing about the writing I did for this course, one I now consider crucial in every college student’s curriculum. Gradually over my years of teaching, which now extends to more than 40, I figured out the answer. It’s because Professor Tartella, diligent, conscientious, and learned as he was, never invited me to write on a topic that really mattered to me. Indirectly, he taught me the importance, the absolute necessity, of not only allowing, but encouraging students to think, talk, read and write about the issues that touch their lives. All learning, by definition, I have now discovered, is personal learning, or it is not learning at all.

I wish on that dreary November day Professor Tartella had asked us to talk and then write about the assassination we had all just heard about, to put down on paper the thoughts that were foremost in our minds, the feelings that were closest to our hearts. I know at that moment what was inside me was ready to spill out onto the lines of the notebook in front of me. I’m sure this was true of every individual in that classroom, including Professor Tartella.

Now every time I walk into a classroom I remind myself of this principle. Following the advice of Langston Hughes, the noted African-American poet of the 1930’s in his poem, “Theme for English B,” I invite my students, to “write a page” and “let that page come out of” them. And I ask them to read and speak and listen as well. I’m sure by doing this my students will truly learn. I’m also sure if Professor Tartella had asked us to write on that dreary November afternoon, then now — 50 years later — I would remember something more from that course than the tolling of that bell.

Mark Smith is a professor of English at Northern Michigan University.

To add your own stories, comment below our email thunt5@nd.edu.