From the classroom to the dorm room, my time at Notre Dame provided me with a great many memorable experiences — but one of the most profound (and unique) had little to do with any academic activity or student hijinks. 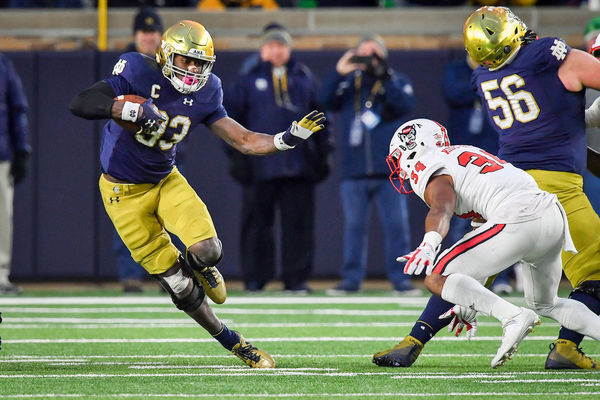 An impressive play, but it's no airport shuffle with Granny Faust. Photo by Matt Cashore '94

It was the summer of 1982, and my roommate and I had rented an apartment in an old house in South Bend.  A year removed from our two semesters in the School of Architecture’s Rome Program, we were eager to recapture our urban independence after a year in the dorms, Alumni for Dan and Dillon for me.

By way of good luck, the Corbett family — a household of nearly all ND grads or students, including my architecture classmate, Kate — lived down the street. I managed to hang around the Corbett house for much of the summer, and somehow, they did not seem to mind!  I grew to admire Kate’s father, Bill, in particular for his sense of humor, his love of his family, and his ability to take interest in many things, notably the friends of his children who dropped by.

You couldn’t visit the Corbett house without Bill Corbett, ND grad and former Navy pilot, engaging you in some kind of interesting conversation. He also seemed frequently occupied with some Herculean task, like breaking up his  concrete driveway so he could repave it in brick, and building a sort of wooden spillway so that he could slide the smashed up concrete chunks  down the hillside behind his house. It was impressive (frightening, even) to watch. During the day, Corbett was a banker in South Bend, but he also had the job of flying the Notre Dame football coach, then Gerry Faust, around the country on recruiting trips and speaking engagements.

One bright June day that summer, Corbett said to me, “Bell” — he always called me by my last name, a habit, I suspect, left over from his Navy days — “I fly Coach Faust on a lot of recruiting trips, and if you want a lift back east to Pittsburgh, let me know. We head there a lot and we can drop you off.”

“Be here at 12:30 sharp, Bell, or we’ll leave without you,” Corbett commanded. “Coach has a tight schedule.” I knew well enough to obey and not ask too many questions, so I left my summer job early that day and showed up around 12:15, bag packed and ready to go.

Around 1:30 or 1:45, Gerry Faust zoomed up in a dark blue sedan, flung the doors open wide, and we headed for the South Bend airport. There we were greeted by a squadron of airport personnel warming up the plane, propeller whirring and Corbett shouting instructions to all concerned. We piled in: Faust, Corbett, me…and Gerry Faust’s mother-in-law. As I climbed into the back seat with my new acquaintance, I wondered — was she some sort of secret recruiting weapon? The “deal-closer” for those hard-to-land blue-chippers? Seemed unlikely.

I had never been in a private plane before and I had certainly never flown over the Golden Dome, but there I was just after takeoff, looking down on the campus and noting things like just how many sprinklers the university grounds crew could run at one time! The flight was humming along well, but making small talk with my new seatmate proved tough, both because of the noise — it was a bit like flying in a small sports car with no muffler — and because she had been intently praying the Rosary since we left South Bend. I decided not to interrupt her, and every so often we exchanged smiles.  My guess was that this trip was not her first choice in travel options.

Looking out of the left side of the plane, I eventually spotted Lake Erie and figured that my little adventure was soon coming to an end. Though it was difficult to make out, I could hear Corbett on the radio speaking to air traffic controllers about wind and weather conditions and making preparations for our approach. But things were about to get interesting. All of a sudden, Corbett slid off his headset and began whacking it on the dashboard of the plane, saying things like, “The %$#@*&! radio went out!” After a few whacks, the radio somehow crackled to life once again, and I could hear him shout, “I’ve got the Notre Dame football coach on board and we are coming in for a landing in ten minutes!” It seemed less of a conversation with the control tower and more of a declaration of just what we were going to do. If you were smart, you would get everyone out of the way. You have been warned.

This all sort of fed into a mystique my roommate and I had of Corbett, the former Navy flier whom we imagined probably preferred landing planes atop semis rolling down the highway to gliding onto a stationary target like an airport runway. I only ever flew once with Corbett, but I arrived at the conclusion that a mere radio problem was not going to put much of a dent in this guy. He knew what he was doing, of that we were sure — though I did have a moment of terror remembering how Knute Rockne ended up on his last flight and imagining myself as the answer to some sort of macabre trivia question about architecture students, plane crashes and Notre Dame football coaches.

Normal communications miraculously restored (was it the Rosary?), we landed somewhat uneventfully in Cleveland and pulled off the runway to a remote part of the airport where a small van was waiting for us. The true mission of the stop in Cleveland was about to become clear.

We quickly piled into the van, careening around the airport until we screeched to a halt in front of the US Air terminal, crowded with the usual assortment of weekend travelers on a Friday afternoon. As we hopped out of the van, Faust grabbed me, put both arms on my shoulders, leaned in and said in that raspy coach’s voice that he was known for, “Matt, we gotta drop Grandma off for her US Air flight to Charlotte and we’re running a little late. I’ll run down and hold the flight. You bring Grandma down to Gate 9. OK?”

I almost yelled “Break!” or “Go Irish!” but instead nodded OK, feeling distinctly like we were running the play that I was sent in to execute.

Faust took off, zigzagging through the crowd, sporting a blue polo shirt bearing the words “Notre Dame Football — Coach Faust” emblazoned in gold on the front, with many in the crowd quickly recognizing him and pointing, just as if we were making a commercial. I trailed behind, Grandma holding tightly onto my arm, steadily advancing toward Gate 9. (In those days, you could walk right up to the departure gate without a ticket. Imagine!) My high school chum was positioned inside the terminal and witnessed the entire drama, asking me later, “Was that you with Gerry Faust? Do you know him? Who was that lady?”

I’m pretty sure Grandma made the flight.  Faust thanked me profusely for the assist, and he and Bill Corbett continued on to some recruiting visit in New England or upstate New York.

And I made it to my reunion in Pittsburgh, happy to have run just one play for Notre Dame.

Matthew Bell lives and practices architecture in Washington, DC and teaches at the University of Maryland. His work ranges in scale from waterfronts, new towns and neighborhoods to civic and mixed-use buildings and schools.  He goes to Italy as often as humanly possible.