I like to imagine that the day they pulled the plug was overcast, bitter and dank. I think it was October and unseasonably chilly. My mom and two sisters, not having realized how cold it was, huddled out on the terrace without their jackets. My mom hunched over for warmth, and my sisters, wide-eyed and curious, danced around the family of daddy long-legs that lived under the floorboards. My dad, still young and powerful, strode across the hills toward the dam that kept the lake from spilling into the river. He ducked down behind the wall and — schlaaah-p! — pulled the plug. In my imagination, it was a giant red cork attached to a metal string that popped like a wine bottle. In reality, I’m sure it was something less colorful — like a lever or a wheel.

And so the water came tumbling out. And with it flowed memories that defined my sisters’ childhoods, but that I would never know. I imagine the summers they spent by that lake — hot days devoted to chasing frogs and slurping strawberry popsicles. I bet in the winter they would strap on skates and trek down to the lake long after sunset, guided by a flashlight and a frosty winter moon. It must have been hard for my sisters to watch the water flow out of the basin, taking with it the textures and tastes of their childhoods and leaving an empty pit. Once the water was gone, my dad put down new grass, and they all got busy living out memories of new summers and new winters.

The day they pulled the plug was long before I was born. By the time I came around, the lake had been replaced with a wide valley sheltered by dense woods and honeysuckle. On one end was a stable, by then old and splintering. It had formerly housed a horse named April, but to me it was the final resting place of a decaying blue rowboat. Our closest neighbors, non-relatives we called Uncle Harry and Aunt Lucille, were maybe a mile away. In the summers, my dad would walk us over to visit them, and I insisted on stopping to fill my belly at their raspberry bush. During our visits, Uncle Harry would complain about the “deer” that pillaged his raspberries every year, and my dad would pass me a clandestine wink. They were excellent raspberries. 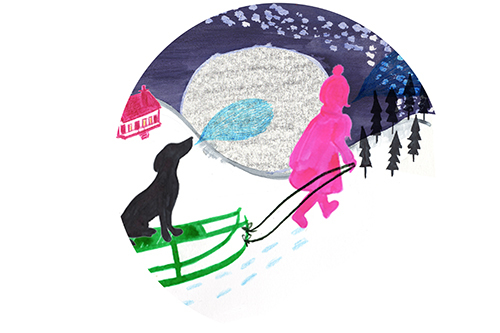 The great basin out back, once the lake, was magic — emerald green with daffodil freckles in the spring, and a sloping marshmallow dream in the winter. On snowy days when my sisters were at school, my dog Maggie (named after my grandma) and I (named after my other grandma) would collect our essentials and venture out like intrepid Vikings. The sledding was exquisite. After several trips up and down the great hill, Maggie and I would collapse at the bottom of the valley, and I would watch our breaths float up and away like breakaway balloons. Up on the hill, the house released a thread of smoke. I would lie there until the gray winter light collapsed into blue twilight and I could no longer see the outlines of individual pine trees. Or until my mom called me inside.

And so that basin was filled with new memories — ones that included me, too. My sisters and I searching the forest floor for fallen chestnuts, splitting open their prickly shells with our shoes. Or my dad and I drilling soccer moves at dusk until the fireflies descended from the pines. But, as before and so again, a break split my sisters and me from our childhood memories. My mom, restless and wanting to move on from a life she no longer desired, migrated to a cramped condo on the other side of town and took us with her. We drove away in my mom’s RAV4 as I clutched the headrest and watched my childhood home shrink to a pinprick down the long driveway.

And so there was another empty basin. This time I filled it with high school dances, football games spent giggling over boys with very little football-watching, and enough teenage angst to overwhelm the ocean. But eventually I became restless, too. I packed my things and left for college with a promise and a prayer that I would never move back. I thought my hometown was too small to contain the life I had hoped for. And maybe I also wanted to leave behind and forget about my awkward and, at times, painful teenage years. I came to Notre Dame embracing it as a shiny new beginning, shut off from the dim and fractured past.

And so came South Bend, Paris, Chicago and many other stops along the way. With them came more glittering lakes, more empty basins, and more plugs that I pulled as I moved in time and place. Some painful, some not — but every one of them was as fuzzy and uncertain as the first pulled on that October day.

When he finally moved, my dad sold the house and the land to the county. He said they wanted to turn it into a park and would pour concrete into the basin to make it a stadium for concerts. They haven’t yet, and it sits there still. This summer, after a hard year marked by academic failures, break ups and downs, and more than one death, I decided to go back to see it.

I don’t know why, but I felt pulled to go back one last time to the place where I had taken my first steps toward all that followed. The house is abandoned and unkempt. The old holly tree next to the porch has grown over the roof, which sags under its weight. The grass is overgrown. The porch where my mom taught me to hula-hoop looks unstable and termite-eaten. I stayed for a while, leaning against my car and listening to the same cicadas and whippoorwills that used to sing me to sleep. Or maybe by then it was their children and grandchildren.

As I drove down the hills and away from my first home, bittersweet memories of sledding and daffodils and raspberries stuck in my throat. In the rearview mirror, translucent ghosts billowed up in a vapor cloud and acted out memories I had long ago lost. The cloud hovered over the trees, and I watched it for miles. By the time I reached Chicago, I looked to the eastern horizon and it had disappeared. But I’ve found it hasn’t left. It flows from that place and reaches me here. It sticks to my fingers and dwells in my throat, and it sparks alive with the smell of pine trees or the taste of one excellent raspberry.

Why did I ever think those basins were empty? Turns out they were filled all along — with chestnuts, with Maggie, with soccer practice and football games. They grow deeper and wider, inviting me in a syrupy song to fill them ever higher. I change with them, of course — transforming through failures and friendships, all the while borne up by the shimmering waves of a bottomless lake. It was naïve to think I could leave all that behind. And why would I ever want to? Through all my failures and heartbreaks, I am moored to a rich inheritance of living memories. But all the while, invited by the future’s crisp and electrifying call: schlaaah-p!

This article was one of four second-place winners in this magazine’s 2014 Young Alumni Essay Contest. C.M. Wurzelbacher is a third-year student at the University of Chicago Law School.