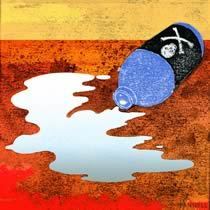 I sit in the playhouse theater with our Girl Scout troop, watching the pivotal moment when Tinker Bell has ingested poison meant for Peter Pan and can only be saved by the clapping hands of children who believe in fairies. Throughout the room, tiny hands frantically smack together. A sense of hope for the healing power of fairy faith wells up, reaching a clapping crescendo.

Delighted, I turn to the troop members, expecting smiles and childlike wonder.

“Die, fairy. Die,” says Grace, an 11-year-old who would rather be playing basketball or drawing skulls.

The other Scouts laugh heartily. In point of fact, Grace is not a psychopath. She is exceedingly polite and was the only Scout who helped me carry all the sleeping bags to our cabin during our last camping weekend. Still, I shift uncomfortably in my velvet seat.

It has been a week of uncomfortable moments. The preceding evening I attended a “Welcome Parents” night at the middle school that our older daughter, Emily, would be attending. A counselor stood at the podium and began her speech with a warm smile.

“It is the job of the middle-school student to mentally murder the parents during these formative years,” she said.

A gasp rose up from the audience. We thought we were here for a discussion about signing up to become a Locker Buddy and to receive a list of holidays for peanut-free cupcakes. The counselor continued to smile like an all-knowing Buddha speaking to a bunch of newbie monks.

She said students assert themselves during the middle-school years, breaking away from parents in a quest to discover their own ideas. During this physical and emotional metamorphosis, they cling to peers rather than family.

They won’t hold your hand anymore. They will roll their eyes at you. They finish family dinners in a flash to get back to texting. They walk several paces in front so no one will connect you as a familial relation.

You become the enforcer of unreasonable demands, like not wearing that low-cut camisole to Aunt May’s funeral and not staying out all night with Suzy at the Gas & Sip. And for that you are mentally placed in cement shoes and thrown off the Brooklyn Bridge.

It is their job to psychologically kill off the parental units they have worshiped for 11 years, the counselor said in the same calm manner as if she were delivering a crop report to a group of farmers. Through this process of emotionally breaking away, the not-quite-teens become ready to launch someday. By killing you, they find themselves, she said, closing her speech folder with gusto.

Now we are supposed to go home and embrace these fairy killers who are waiting to drop flowerpots on our heads.

It took me years to figure out what I was doing as a parent. I didn’t realize how hard you had to pat to get the big burp. I didn’t know that a day of screaming meant a double ear infection. When I bought the caterpillar that played music, it never occurred to me that Emily might fall on the antenna and blacken her eye so she looked like a boxer in her 1st birthday photos. Through trial and error and tears, mostly mine, I learned how to be a parent.

And now it’s starting all over again. I know nothing about this new creature, the one who will wish me ill and steal my shoes and eyeliner. All the wisdom I have accumulated is archaic. All-knowing mom is as obsolete as a mix tape.

I remember several years ago when our younger daughter, Sarah, was only 2 and we watched the movie Peter Pan. Her scream of anguish when Tinker Bell collapsed could not be extinguished. We had to stop the video to convince her that the fairy would live, holding her close and wiping away her small, warm tears. It is a moment preserved in amber, the pure sweetness of childhood.

On the way out of the theater, as I am longing for that moment, Emily runs up to me. Making sure no other Scouts are around, she squeezes my hand and says, “Thanks for bringing me, Mom. It was good.” Then she is off down the stairs to join her peers, who are probably plotting to burn Tiger Lily at the stake.

It is another amber moment.

Maybe, like Tinker Bell, I must drink the poison to launch my daughter, who, unlike Peter Pan, very much wants to grow up. She has to let me go, leave her dad and me behind as she flies on to greater heights. Someday, after adolescence, she will clap her hands and tell me she really does believe in mothers. I just need fairy faith.

Beth Apone Salamon is a freelance writer and a public relations specialist with the Saint Barnabas Health Care System. Her essays have appeared in Newsweek, New Jersey Monthly and the Pittsburgh Post-Gazette. She can be reached at esalamon@sbhcs.com.