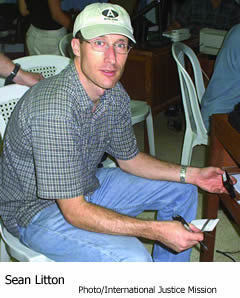 Sean Litton ’97J.D. feared for the worst when he headed to the Philippines six years ago to work for the International Justice Mission (IJM). The then-fledgling human rights group staffed by Christian lawyers was giving missionary work new meaning in the 21st century.

First, Litton worried about the dangers of fighting injustice in the developing world. He also had a professional concern: He’d given up his Washington, D.C., job with Kirkland & Ellis, a top-shelf law firm, and envisioned returning to the United States in a year with few job prospects.

Litton is still overseas, where he serves as IJM’s director of operations for Southeast Asia, supervising efforts to combat sex trafficking and child prostitution in Malaysia, Cambodia, Philippines and Thailand. In 2005, his office conducted an undercover investigation and turned over its evidence to Malaysian authorities, who raided several brothels and freed 94 women from sexual slavery.

“The greatest irony is that everyone thought I was making an incredible sacrifice,” says Litton, 38, who lives in north Thailand with his wife, Shannon, and their two children. “But I can’t think of a single sacrifice I’ve made. And we have helped so many women and children."

Litton was among the first wave of IJM lawyers in Asia during the organization’s infancy. IJM now has 176 employees and offices in 10 countries. Its 2005 budget topped $10 million. IJM was established as a vehicle for Christian law-enforcement personnel to fill a void in the aid network. While missionaries have historically provided food and shelter to the poor, they lacked the skills to address widespread human-rights abuses.

Abuses are innumerable. In South Asia, IJM combats the illegal bonded-labor system that enslaves workers who borrow from moneylenders and can’t earn enough to pay off their debt. In Africa, IJM fights for the rights of the Ugandan widows of AIDs victims whose land has been stolen. From his office in Thailand, Litton oversees a staff of 60 investigators, lawyers and support staff. Their main goal is to rescue the young victims of sexual slavery and reunite them with their families while encouraging local authorities to enforce the laws prohibiting child prostitution.

“When I got here six years ago, I was doing one case at a time, trying to change one kid’s life,” says Litton. “Now I’m starting to understand that the entire system can change as the governments pick it up and use their own resources to take it on."

Unlike other human-rights groups, which publicize abuses to influence the court of public opinion, IJM works alongside local authorities to effect change. In one community, Litton’s staff will conduct undercover investigations and train police in modern evidence-gathering techniques. In another, they may teach the ethics of policing, instructing local cops that it’s never right to take payoffs to look the other way.

IJM undercover investigations can develop evidence that leads to brothel raids. Once the perpetrators are arrested, IJM works with local prosecutors to bring them to justice in local courts. Successful prosecutions have a deterrent effect, Litton says. When he arrived in Thailand in 2003, underage prostitutes strolled the streets of Chiang Mai, where foreign pedophiles came on sex holidays. After several prosecutions, the trade has vanished.

“Criminals come to realize that if they mess with children, the police will take them out,” says Litton. “They don’t want to go to jail."

These prosecutions, meanwhile, can boost a nation’s image on the international scene, providing reinforcement to governments that in the past have turned a blind eye to the problem. While Litton works to change the attitudes of Asian law enforcement officials, he’s also helping rebuild the lives of the young women rescued from the brothels. IJM partners with after-care agencies in all four countries that provide safe houses for the girls as they begin the healing process after months of captivity.

Litton’s route to Thailand began in Grand Rapids, Michigan, where his father and grandfather were both lawyers. But Litton had his heart set on the seminary. After graduating from Miami (Ohio) University, he went to New Mexico to serve as a youth minister.

Four years later he returned to Grand Rapids, with plans to attend Fuller Theological Seminary in Pasadena, California, in the fall. He never made it. He spent that summer as a wilderness instructor near Yosemite National Park. At the end of the training course he spent 24 hours on a “solo,” alone in the woods with his sleeping bag and a bottle of water. Litton emerged certain that his true nature wasn’t compatible with the qualities needed to wear the collar.

“I realized I was a driven, hard-nosed kind of person who was very aggressive,” he says. “That wasn’t a good fit to be a pastor."

So he turned to Note Dame Law School. Litton recalls he didn’t take a single class in international law or human rights. “I had one goal in mind: get a job."

His plan worked. Upon graduation, he landed at Kirkland & Ellis, where he worked alongside Kevin Loftus ’97J.D. Loftus and Litton would often discuss where their legal careers would lead. “We talked a lot during the time Sean was making the decision,” says Loftus, an attorney with the U.S. Securities and Exchange Commission. “It was an opportunity in keeping with what he thought was important."

Litton learned of IJM at the Washington Community Fellowship Church on Capitol Hill, a congregation with a strong social justice ministry where IJM founder Gary Haugen was also a parishioner. Litton was touched one Sunday by Haugen’s call from the pulpit to do one’s part in the great moral struggles of the day.

For many years, Litton had found inspiration from Philippians 2: 5–8, which urges Christians to let go of selfish ambition and humbly serve those in need. “I’d been soaking in those verses for several years,” says Litton. Now he had an opportunity to live the word.

He left for Asia with a one-page budget, a two-page work memo and an ATM card. After a two-week introduction, he was on his own, thinking he’d address complaints about police mistreatment of Manila’s street children. While surveying agencies that served the poor, he visited a shelter filled with sexually abused girls. Their rapists, meanwhile, were walking the streets with impunity.

He was taken by the case of Katherine, a 15-year-old raped by the son of a police officer. She’d made a complaint to the police, who had issued an arrest warrant but hadn’t picked up the accused. Litton was able to locate the young man and pass that information along to the National Police, who apprehended the suspect and brought him to trial, where he received a life sentence.

Litton still keeps in touch with Katherine, now earning a college degree in social work and working at the shelter where she once lived.

“When I took this job, I figured if I could help just one child, I was doing what God wanted me to do,” says Litton. “Now Katherine’s a brilliant, strong young woman who lives on her own."

The case showed Litton that he had the legal skills and personal moxie to succeed in the streets of Manila. By 2003, Litton moved to IJM’s Thailand office, which had just received a grant from the U.S. Department of Labor to establish a sex-trafficking prevention program.

When Congress passed the Victims of Trafficking and Violence Protection Act in 2000, the State Department was required to rank countries annually on how they meet standards in combating sex trafficking and bonded labor, with economic sanctions possible against nations that aren’t doing enough. IJM is among the faith-based groups that have received federal grants to work with the U.S. embassies and local authorities overseas to improve their records on these issues.

All four nations that Litton oversees—Philippines, Malaysia, Thailand and Cambodia—are both a source and destination for trafficking operations, according to a recent U.S. State Department report.

While Litton helps authorities crack down on trafficking, he’s also helping to prevent it. In Thailand, an estimated 400,000 of the country’s 1 million Hill tribe people don’t hold official citizenship. Without legal status, they lack government IDs, can’t travel freely and are excluded from some school programs. This restricts their economic options. A United Nations report found that the lack of citizenship was the single greatest risk factor leading to trafficking of Hill tribe women and children.

Litton has forged a partnership with several tribal organizations to register their members, with IJM providing legal aid to obtain the documents. So far, several hundred children have received their papers, making them eligible for a broad range of services.

Such successes keep Litton overseas, far from his extended family and friends back in the States, where he visits annually.

“I often think about doing this or going home,” he says. “In light of the need and my gifts, my wife and I think the right thing to do is to be here."

David McKay Wilson is a New York-based freelance writer who writes regularly for alumni magazines around the country.