I just experienced my last home football game as a student and I am not quite sure how to feel about it. This senior class has had four great years of Notre Dame football. We were around for the triple-overtime win against Stanford; the BCS Championship game; Everett Golson’s suspension, return and departure; and, this year, another record-setting football season. 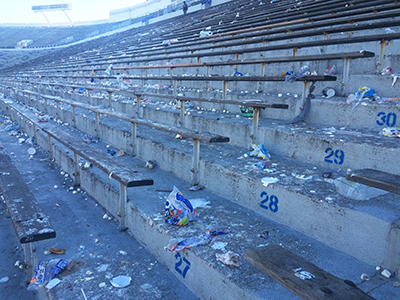 It’s weird to think how far we have grown with Notre Dame football.

As sophomores, we didn’t move far but we were happy to be able to choose where we wanted to sit and who we wanted to sit with. We were now in the corner of the stadium and with a year of cheering under our belts, we knew how things were supposed to run.

Junior year was a bit different. Yes, we were closer to the 50 and had more shade to cover us from the hot September sun, but half of our friends were studying abroad. It was strange not to have them there with us. Still, those of us who remained made friends with people we had never met before.

Senior year rolled around and our time had finally come, but it was different from what I thought it would be. Walking up those steps to find a seat felt like an entirely new experience because I knew so many people. Being able to look up at my class and recognize most of the faces was something I had never expected would happen.

It was also different because there was never enough room. Some games, my friends and I had to stand in the aisle at the top of the senior section because the benches were full. Others, we had to hold on to the metal bars behind us to make sure we wouldn’t fall off the benches we’d managed to claim.

I can’t say I paid much attention during our last home game against Wake Forest, though. I was too busy talking while also restraining myself from eating the marshmallows I’d hidden in my jacket. We kept the tradition where, during halftime of the last home football game, seniors throw thousands of marshmallows into the air — it looked like a mini snow storm — only to end up with them sticking to our shoes, our clothes, our hair. 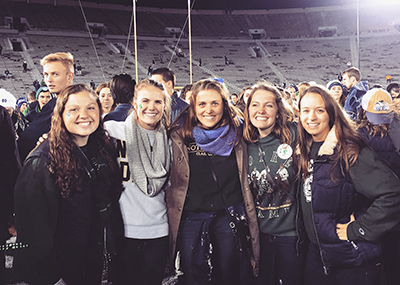 At the end of the game, we waited for everyone to leave so we could jump over the wall and onto the field. People did victory laps around the sidelines, laid down in the middle of the field, and took advantage of the great photo opportunities. I took a moment and looked up at the now-empty stands.

Despite being squished together and coated with sticky marshmallow, we wouldn’t have traded that final game for anything else. We stayed until the end because it was our last chance to stand together and sing the alma mater at a football game. We stayed because we wanted to savor our 50-yard-line view. (We know we will never get seats as good as those as alumni.) We stayed because we wanted to take it all in, one more time, as students.

Yes, it was strange leaving the stadium and thinking that the next time I walk out through this tunnel, I will be a graduate of Notre Dame. But I know I will hold in my heart all of the memories I made there — whether in scorching heat or snowstorms — for years to come.

Danielle Rieger is this magazine’s intern for the autumn 2015 semester.