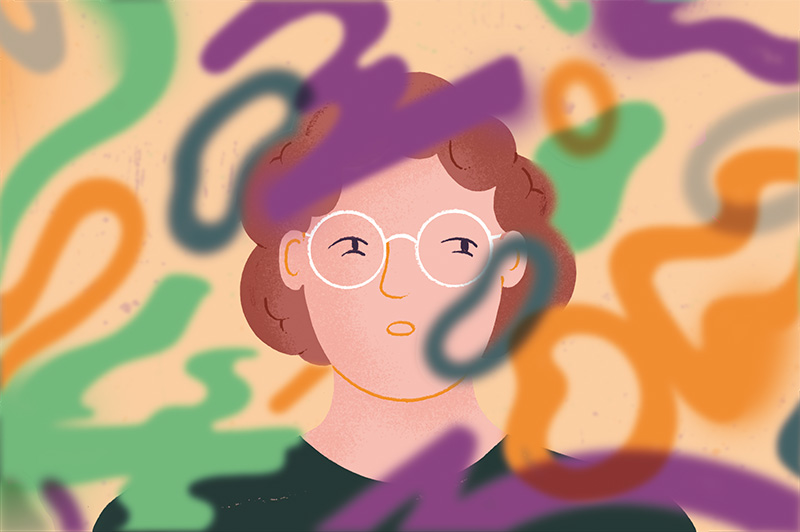 “Could you just tell me, please, whether they are numbers or letters?”

I put on my most gracious manner, my softest voice, to ask my question of the lady in the green sweater who sits behind the desk at Window 1. Hoping against hope that she will answer me, I nevertheless expect the worst, in part because of her professional air and neat attire — the sweater and the black pleated skirt and silver-coin necklace with matching earrings. She doesn’t appear to be the kind of person who would help someone like me who was trying to gain access to a forbidden clue, an illegitimate leg up on an official test. Oh well, my question was never more than a Hail Mary pass, born of desperation rather than any real hope of an answer.

Actually, this is not the first desperate move I have tried since showing up at the lady’s window a few minutes ago. The first occurred when she instructed me to read the second line under “B,” and I willfully misinterpreted her — reading instead the line below, which displayed symbols at least three times as large as line two. Why I thought she might fall for that ploy, I don’t know. At least she didn’t get angry. She just calmly repeated the instruction: “Read the second line under ‘B.’”

There was a long pause. I couldn’t read it, and I stood peering at the line I was supposed to say aloud, pressing my forehead until it hurt against the black box with the binocular-like peepholes, as if by doing so I would get near enough to decipher those illegible symbols.

Only the week before, I had been to my ophthalmologist for a complete eye exam, including refraction, inspection of the retina and visual field test. Realizing I wasn’t seeing very well, I had gone to the eye clinic before reporting to the Department of Motor Vehicles. At the end of the exam, the eye doctor and Larry, her technician, responded reassuringly to my anxious prodding. “The eye test at the DMV is easy,” Larry said. “You can pass with a corrected vision of 20/60.”

Since childhood, I had known that my vision was exceptionally bad. In my early teens, I learned that my myopia measured 20/800, putting me in the category of profoundly nearsighted people whom ophthalmologists call “high myopes.” But at the DMV, my naked eyesight would be irrelevant. The examiner would allow me to wear my glasses, bringing my vision up to 20/40 in my right eye and a little better in my left. “So I can go ahead and renew my license?” I asked happily. This chore had been hanging over me for a while.

“Yes,” said the ophthalmologist. She thought I would do just fine. In fact, she didn’t even think I needed to buy new glasses.

But here I am, taking the eye test, and I am not doing fine. The line I am supposed to read looks like a smear of dead mosquitoes on a white page. “Maybe if I change glasses I’ll do better,” I say, more to myself than to the lady behind the desk. She is being remarkably patient with my long periods of silence. I don’t dare speak loudly or even look at her for fear of reminding her that I am still here and have not attempted to read. Instead, I pick up my purse and reach into the compartment where I keep my Coach glasses case, beige-and-cream-colored, with a design featuring elliptical shapes that look like spectacles. I take my glasses from the case and remove those sitting on my nose, all the while worrying. It seems that I am really not going to pass and will have to go through all this again.

By “all this,” I mean the stressful morning: the half-hour ride to the DMV in the Checker cab, which I reserved last night to avoid the apprehensiveness I experience when driving to a new destination. But my first minutes in the taxi made me doubt the wisdom of that decision. The cab was making a ferocious rumble when I climbed in, like a jet getting ready for takeoff, and the noise erupted whenever we stopped at a light. The driver himself, with a thick Bengali accent and a chatty disposition, tried to converse despite the noise by yelling in my direction and looking at me as he explained why his route was better than the one I had found on Google. Wanting him to focus on the road, I stopped answering his remarks, but that didn’t prevent us from nearly getting into a collision when he was turning left on yellow and a woman decided to run the light. By the time she braked, both her car and my cab were in the crossroads, with only a few inches separating the two motionless vehicles.

After that, I couldn’t seem to get my breath. Between the roar of the taxi, the yelling of the driver and the near-collision, my nerves were shot. The driver spent the rest of the trip explaining why the close call had been the lady’s fault, not his. And while I tried to convince him that I agreed, he continued protesting his innocence as we drove into an abandoned neighborhood, past trucks and warehouses and the city jail, pulling at last into the parking lot of the DMV.

Then, unexpectedly, my driver did something comforting. He asked if I wanted him to wait with me, charging only a little extra, so I would have a cab ready to take me back from what he considered a dangerous neighborhood after obtaining my new license. Grateful, I accepted, and we went together through the bright teal doorway into a pleasant room with rows of red plastic chairs facing away from the door toward numbered windows where people sat behind desks, ready to help me. I was familiar with the system — take a number and, when it is called, go to the window they announce on the loudspeaker. But my driver evidently didn’t think I was too competent because when my number came up he grabbed my arm and pointed out Window 1, as if I might not know where to look for it.

The previous customer was still sitting in the chair when I approached. She was thin — one of the thinnest people I had ever seen. She flashed me a smile that was radiant despite her missing teeth, and I smiled back, waiting while she folded her soiled, wrinkled birth certificate into tiny squares and then forced it into a pocket of her worn pants. Touched by her friendliness, I felt grateful to the place that had made our encounter possible, this office of the state bureaucracy where — no matter one’s income or education — we were all the same.

After putting on the glasses I have removed from the case, I can see a little better but still can’t quite read the line. If there really are any letters in that dark smear, I think, they must be Chinese, or maybe Arabic. Certainly, they don’t look like anything out of the English alphabet.

I am just about to give up when an idea occurs to me. All this time I have been looking for letters, but now I notice that some of the symbols look a bit like numbers. This is when I ask the question: letters or numbers?

Evidently the lady behind the desk doesn’t consider it cheating to answer me. “They are all numbers,” she says.

I am thrilled. She has just reduced my choices from an impossible 26 to a mere nine, and I feel optimistic for the first time since starting the test. Now I can make educated guesses and maybe even get some right. I look again at the first symbol. It is the hardest, being cluttered in the middle with close, black print. By squinting and making a determined effort, I detect what seem like two circles, one on top of the other. “Eight?” I guess.

Receiving no answer, I forge ahead, hazarding guesses about the remaining symbols. If I can make out a straight line, I know the number may be a seven, a four or a one; it cannot be a three, six, or other number with only curves. Based on the parts, I interpret the wholes as best I can. “Four,” I say, then more rapidly: “Seven, three, six.”

The lady says nothing about the numbers but flashes some lights on either side of me. She tells me to identify which side the light is on — right or left — and this is easy, even for me.

The eye exam seeming to be over, I risk another question: “Was it an eight?”

That was nice of her — to tell me. Joyfully I ask how long the license will be valid. When she says it will be good for eight years, I say “Hurrah!” silently, to myself. I won’t have to come back for a long time.

Seeing that I am finished, my driver gets up from his seat and we walk out together. He asks to look at the object of all this trouble, the holy grail of our quest: my temporary driver’s license, with my new picture. I hand him the license and blurt out the thought that has replaced my previous worry about not passing: “I don’t like my hair.”

My driver studies the photo and responds with encouragement. “You’re photogenic,” he says. “It’s good.” Besides looking at the picture, he has also read my birthdate on the license and now knows more about me than some of my closest colleagues. “You are older than I am,” he observes, “but you’re doing great.”

I look at him with interest for the first time. He appears to be in his late 40s. About six feet tall, he is slight and neatly dressed in an aqua and white striped polo shirt and khakis. On the trip home, we start to talk about his early life. Mohammed — that is his name — tells me he has no feelings for his mother, who died of tuberculosis when he was 10, or his father, whom he describes as a ne’er-do-well. But he loves his grandparents, who took him in, raised him and paid for his education.

Thanks to his grandparents, he graduated from the University of Dhaka, majoring in political science, the same field as I did. While still in Bangladesh, he married and became a father before winning the green-card lottery, which enabled him and his family to immigrate to the United States. There were only 55,000 slots that year, he remembers — not for Bangladesh alone, but for the whole world. He was lucky. Now he has three children: the son born in Bangladesh, who recently graduated from an American university, another son who is still in college and a daughter finishing high school. “This is a wonderful country,” he concludes, and in the elated mood of someone who has just passed her eye exam, I tell him I agree.

Somehow, our return trip seems shorter than our expedition out to the DMV. Maybe it is because the taxi has ceased making that awful racket, and Mohammed has stopped yelling, and no lady decides to run a red light, almost killing us. No one even comes close.

Martha Grace Duncan is a professor of law at Emory University. She is the author of Romantic Outlaws, Beloved Prisons: The Unconscious Meanings of Crime and Punishment (NYU Press).